In 2006, when I stumbled upon a collection of objects that people had swallowed or inhaled in Philadelphia's Mutter Museum, I was initially struck by the strange nature of these things, the question of why someone would gather them together in one place, and the poetry of their arrangement in a magical set of drawers. It wasn't until I'd discovered that the doctor who extracted them had written a bestselling autobiography in 1938 that I realized there was a book waiting to be written about the curious doctor and his collection. I soon found myself equally driven to re-discover the lives of the patients whose stories, lives, and bodies these objects were but a trace. The resulting book I called Swallow (The New Press, 2011).

When I set a Google alert to the name of the once-famous doctor, humanitarian and miracle man, "Chevalier Jackson," my e-mail filled with mostly stray references to Michael Jackson. One day, however, I learned about a visual artist, Lisa Wood, who, on the opposite coast of the United States, had also been inspired enough by the collection to devote a body of work to its intrigue. In Lisa Wood's "Swallowing Plates," she situates tintype-era photos alongside foreign bodies she imagines people to have swallowed, and creates beautiful assemblages as unexpected memorials in each case. The subject of my slide show is the play between fiction and nonfiction, the real and the imaginary that the foreign body collection animates. Lisa hadn't seen but had read about the collection, and many of her foreign bodies are imagined. But my own work proved that both the real stories and the objects in Jackson's collection were very much in line with Lisa's wondrous art and made-up tales. "Is it really so?" "Did this really happen?" You decide.

13 Real And Imaginary Things That People Have Swallowed (PHOTOS)
Swallow 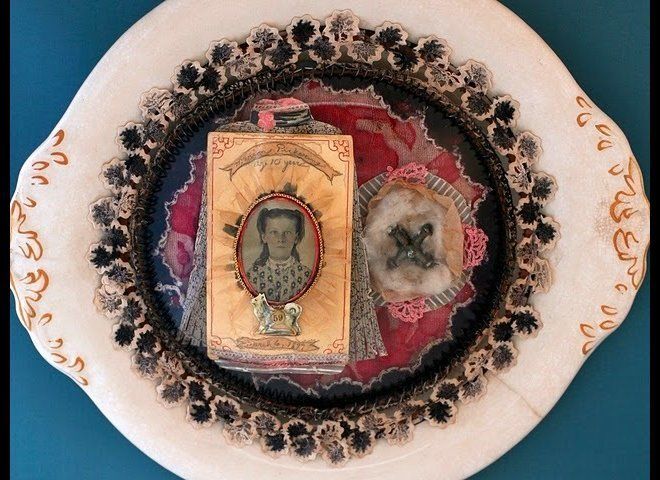 1 / 13
Real or Imaginary Pot Metal Jack?
Lisa Wood's imagined "Case no. 59," the case of Marion Pickering, aged 10 years from Kingfisher, Oklahoma, features a girl who decides to catch as many jacks in her mouth as she can. "Not content to simply bounce the ball and scoop up the jacks," Lisa writes, "she added her own invention, popping them in her mouth with each bounce of the rubber ball. After much practice, she was able consistently to get all ten jacks into her mouth with ease, to the delighted amusement of friends and neighbors." Foreign body accidents are their own genre in the way they intermingle forms of human playfulness with unforeseen results. To play is to risk something: maybe that's an essential truth that foreign bodies teach, which is why some people find it impossible to play. Lisa's case reminds me a little of the closing episode in a game described in one of Jackson's case studies that goes like this: "Patient playing with tin cup containing a white pear button. Child threw cup up, patient's mouth was open and button fell in."