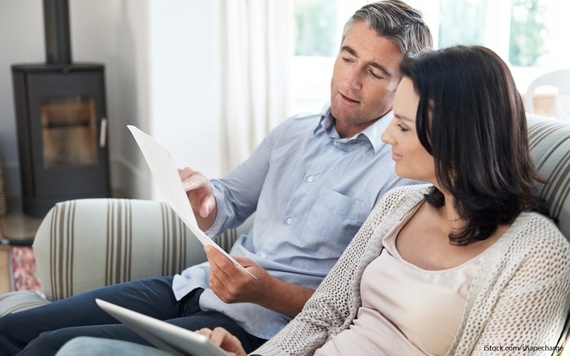 People typically don't want to pay more taxes than they need to, but a tax refund implies just that. Withholding more money than necessary each paycheck means that an individual forgoes the opportunity to earn interest on that money elsewhere. Approximately 77 percent of taxpayers receive a tax refund, according to the IRS.

Using a tax refund check to pay off debt is the most popular way to spend a tax refund, as 27 percent of respondents plan to do so, according to the GOBankingRates survey. "The goal in spending a tax refund should be long-term financial security," said Tim Gagnon, a professor of accounting at Northeastern University's D'Amore-McKim School of Business.

"Just reducing [a credit] card balance to run it back up does no good," he said. Eliminating a credit card completely, paying off a high-interest loan and avoiding another similar debt is, however, evidence that your spending habits are under control.

"If you're incurring credit card debt throughout the year and then paying it off with a big tax refund, you should consider moderating your spending and adjusting your tax withholding," said Benjamin Sullivan, a certified financial planner with Palisades Hudson Financial Group.

Putting your funds into a savings account was the second most popular way to spend a tax refund, according to the GOBankingRates survey. Twenty-five percent of respondents chose this option, despite the low interest rates currently offered on most savings accounts.

"This option may make sense if you don't have a sufficient emergency fund, but otherwise that money could do better elsewhere while interest rates remain so low," said Sullivan. "Especially for younger taxpayers, consider contributing your refund to your retirement savings or other long-term investment accounts, where your long-time horizon can result in more robust growth."

Perhaps worse than putting the check into a low-interest savings account is placing it in your checking account and watching it dwindle. With a nice chunk of cash now lining your coffers, it might be tempting to take off your budgeting hat and splurge on steak or quality wine. You're also probably not earning much, if any, interest on that money.

"Refunds are made of your hard-earned money, and they should be spent like a normal paycheck," said Michael Eckstein, a tax accountant with Eckstein Tax Services. "That means avoiding the urge to splurge, and paying down debt or saving for the future."

4. Pay for a Vacation

Putting the money toward a vacation was how 9 percent of respondents said they would spend their refund check, according to the GOBankingRates survey. However, "an expensive vacation, though not a money pit, is a means of instant gratification that is not tangible ... you do not gain anything subsequent to this expenditure," said Ravi Ramnarain, a CPA and an accounting and tax expert.

Seaman, however, said that a vacation is not such a bad thing, but added that you shouldn't plan so far ahead that you spend the money before you have it. "The government may take longer than you're expecting to process your refund," Seaman explained. "You might get lucky, but there are a number of reasons why there might be a legitimate delay in getting your payment from Uncle Sam."

Putting a tax refund toward a major purchase, like a car or a home, was the fourth most popular way to spend a tax refund check, with 5 percent of the respondents planning to do so, according to the GOBankingRates survey. However, Ramnarain said that a purchase that disregards the long term is tantamount to throwing money away.

When deciding whether to purchase a car or a home, it's important to make sure you can afford any monthly payments and upkeep. "Calculate the significant interest payments and maintenance required, and those two elements could empty out your bank account in no time," he said.

Ramnarain said that individuals should make money work for them, rather than the other way around. "Depending on the actual amount received, good choices would be government securities, or possibly a down payment on an inexpensive piece of real estate that has long-term cash-generating potential," he said. "Subsequent tax refunds can be used to pay off any mortgage balance that is still outstanding."

6. Splurge on a Luxury Purchase

Using a refund check to splurge on a purchase, such as a TV or shoes, was also a popular choice for 4 percent of respondents to the GOBankingRates survey. However, Sullivan recommended taking some time to plan the most effective way to use tax refund money. "If you opt for a big-ticket purchase, it should be something that works within your overall budget," he said.

"While it may feel like free money, a tax refund is actually the government repaying you for an interest-free loan," said Sullivan. "It's money you earned, and should be used as responsibly as any other funds. Don't consider your refund a separate bucket for free spending."

When it comes to splurging on luxury purchases, it's important to develop good fiscal habits rather than bad, said Pauline Paquin, founder of Reachfinancialindependence.com. "Blowing the money on stuff you don't really need -- nights out, shoes -- will condition yourself to thinking that when a windfall happens, the money should disappear as soon as possible," she said. "That is a terrible idea."

Three-quarters of taxpayers get a tax refund check, and the IRS reported that the average refund is slightly less than $3,000. However, think of it this way: Your tax dollars have already functioned as an interest-free loan to the government. If you use it to finance new debt, you essentially lose money again by paying on interest.

If you have cash, consider a purchase outright that does not involve financing or interest payments. "Don't use your tax refund as a down payment on a car that is financed," said Yvette D. Best of accounting and tax preparation service Best Services Unlimited. "It would be a better choice to buy a car in full. Then all you have to worry about is upkeep and insurance."

For those who do choose to go on vacation, if gambling is on the itinerary they might want to first consider their odds. Unfortunately, the odds of making money from gambling are extremely low. Your chance of winning at craps is 13.9 percent, for three-card poker it's 30 percent and slot machines it's 6.6 percent, according to the latest figures from the Nevada Gaming Control Board.

"I have seen clients take their refunds to Foxwoods [Casino] for the excitement (a bad idea), or buy that playoff ticket which is very overpriced, which gives no future financial reward," said Gagnon. "Refunds should be put toward a future benefit, like funding an IRA, 401k, a child's educational fund -- a goal for the future."

A sudden influx of cash can whet the appetite and lead to irresponsible and rash decisions -- such as investing in a get-rich-quick scheme. It might be tempting to place the cash somewhere where you are convinced that it will grow quickly, but many such schemes are just scams, according to the Federal Trade Commission.

"Sometimes when people receive a lump sum of money, they think of ways on how to make more of it," said Best. "Investing in get-rich-quick schemes is the fastest way to blow it all. Despite the fact that your tax refund money may seem like a sudden bonus, this is your money. Before investing it in any venture, check it out thoroughly and, when in doubt, don't invest at all."

10. Spend the Money Before You Have It

The expectation of a sizable tax refund can encourage people to overspend. For example, if a couple thinks they will be getting a large refund check from the IRS, they might extend their home renovations. However, this can be a dangerous strategy -- especially if your tax refund is delayed.

The IRS is increasing strategies to fight fraud and, therefore, increasing processing time, which is expected to lead to long waits for refunds this year, according to CBS News. Experts recommended filing early for a quicker refund. It's also a good idea to not spend it before you have it.

"It is easy to start spending when you know a tax refund is on its way," said Best. "But don't do it. You don't want to find yourself overextended if your tax refund doesn't arrive as scheduled."

11. Apply the Refund to Next Year's Taxes

When you submit your documents, the IRS asks whether you want to apply the refund to next year's taxes. This option might be a good idea if you find that you often owe taxes and are not withholding a sufficient amount from your paycheck. However, if you typically receive a refund, there's no need to pay more at the outset.

"One of the worst things you can do with a tax refund is apply it towards next year's taxes," Scott Alan Turner, a personal finance podcaster and expert. "You're essentially letting the government borrow your money for free for a year and not pay you any interest on it."

If you decide to buy stock, make sure you devote time to research and understand the market first. Additionally, investing in one type of stock will not give you a balanced portfolio, which is required for a steady, long-term return.

A better option is to diversify -- for example, by adding funds to a 401k, or buying bonds, according to US News. Exchange-traded funds are also an option if you like to invest in certain industry sectors. Those close to retirement might consider choosing bond funds that appeal to them.

It can be hard to say no if someone close to you is in need. In fact, trying to help a friend by giving them money could merely exacerbate their questionable fiscal habits and not help them at all, according to wealth psychologist Kathleen Burns Kingsbury in MoneyTalksNews.

A better option, according to Kingsbury, might be to help them set up a budget or encourage them to find help for their financial difficulties. If you must lend money, realize that you might not get it back. You can obtain a promissory note that you could have notarized, but consider whether you really would take that person to court if they failed to repay you.

Ideally, your goal in spending a tax refund would be to consider a long-term strategy, and not waste the cash on unnecessary items. It might also be wise to consider withholding less during the year so that you can invest more and benefit from the interest, rather than allowing the IRS to assume your interest.

Related: Why Your Bonus Is Bad News for Your Tax Refund

This article, 13 Worst Things to Do With Your Tax Refund, originally appeared on GOBankingRates.com.