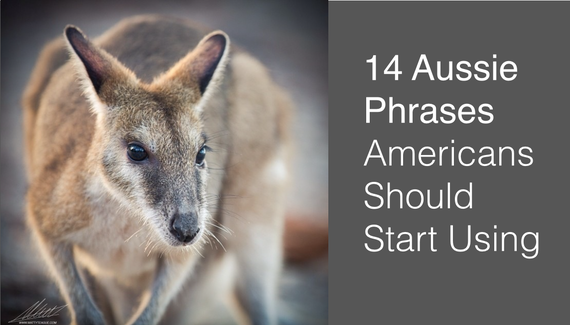 Linguistic convenience at its finest.

2. "My Shout"
Meaning: "I've got this round, or I've got the tab." Aussies are great at not splitting checks, and just taking turns paying for things. Why are they screaming? Probably because they get the most shouty at the pub.

3. "Mates"
Why should mating just be for the Discovery Channel? There's nothing like a night out with your mates.

4. "Uni"
Seriously, why do we even say college? If you aren't going to a community college, you're going to a university. They call it "uni" because that's what it is.

5. "Sus it Out" or "The Sus"
The "sus" is when something or someone is being suspicious and the Australian betches are gossiping about it. I'm going to give you "the sus" sounds less naughty than admitting to gossip.

7. "What a Beaut"
There are so many beautiful people in Australia, they must have just needed a quicker way to say beautiful... after all, they have to say it so often.

8. "Bloody Oath"
Meaning: "That's the truth." But it just sounds so cute when they say it, that you want to believe them (regardless of whether or not they're lying).

9. "Brekky"
No one wants to say "breakfast" that early in the morning. Seriously, coffee is already two syllables, we don't need two more; brekky will do.

10. "Bogans"
We definitely don't have a word for bogans in America. Generally, it could be said that it is calling someone "taste-less." Thank you Australians for coming up with a derogatory term towards all people you dislike. (Okay so "Bogans" isn't exactly the nicest word, but it is pretty funny).

11. "Mucking Around"
Fooling around sounds too much like fun. Mucking around, that's when you know they're getting into trouble.

12. "I'm knackered"
Exhausted sounds like you've collapsed. But knackered sounds like someone took an iron club to your back until you couldn't work anymore. Just saying, sometimes we're that tired.