October 2012 has proven to be an extraordinary month for the medium of paint. There are dozens of strong exhibitions on view throughout the country, which made culling together this list particularly challenging. Selecting only ten shows proved to be too hard of a cut, so this month's list has been expanded to fourteen shows -- it could have easily been doubled.

It has been a long time since the art world has bought into the idea of a unified "-ism" that captures the aesthetic aims of a significant group of artists; plural-ism has been the go to term since the 1980s. Still, for those who look at a lot of contemporary painting, there is no doubt that certain micro-trends are detectable. One such trend, the so-called faux-naive, finds itself well represented this month. It is difficult to precisely define what faux-naive means, but, loosely speaking, it is a term often attached to contemporary painting that actively embraces elements from the visual language associated with outsider and self taught artists. For some artists, this is a perfectly natural way of painting borne out of internal necessity; for others, it is a consciously adopted formal strategy that underpins the content of their work. Artists such as Clare E. Rojas, Chris Johanson, Shara Hughes, and David X. Levine -- a self-taught artist whose colored pencil on paper works are among the most hard-won objects that I have ever come across - all have very different aesthetic points of view, but all construct images that draw energy from the space in between knowing and naivete.

Cities other than New York and Los Angeles are offering good exhibitions this month. I just had the chance to visit Chicago to see Expo Chicago, which is effectively a reboot of Art Chicago in its glory days. The Windy City's gallery scene may be small, but it packs a punch. Three Chicago imagists are on view: Gladys Nilsson, Robert Lostutter, and Roger Brown, whose show of major work at Zolla/Lieberman is a true must see. Shane Campbell has a strong exhibition of new works by John McAllister on view, and Kavi Gupta's exhibition of new "abstract" paintings by the aforementioned Clare E. Rojas makes a strong case for why artists should take chances. I also want to give a big shout out to our old Chicago-friend Roy Boyd, whose gallery celebrates its 40th Anniversary this month with a group show.

In San Francisco, be sure to catch the soon to close exhibition of legendary Bay Area-artist Roy De Forest at Brian Gross Fine Art, as well as the just opened show of new paintings by Martin McMurray at Gallery 16. My old friend Laurie Reid has a show of new work up at Stephen Wirtz Gallery. Laurie's fluency with the temperamental medium of watercolor led to her inclusion in the 2000 Whitney Biennial. In her latest work, watercolor continues to be the medium of choice, but, working on linen instead of paper, she has introduced new ideas into her practice, the result of which is work that delicately hovers between painting and sculpture. 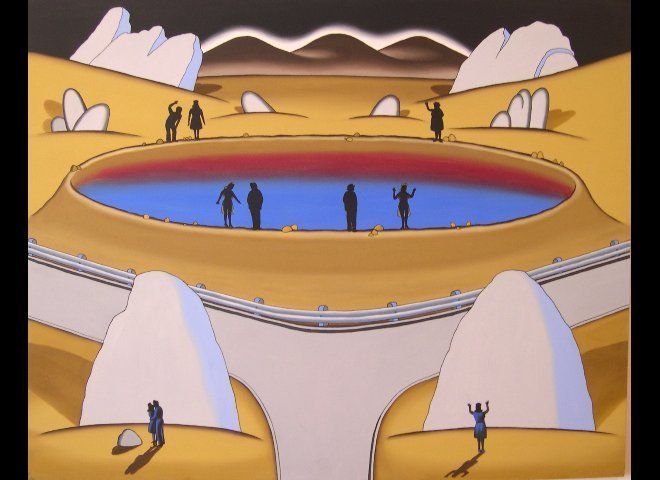