At some 4.6 billion years old, the Sun is about halfway through its life. In another 5 billion years it will be a normal "adult" star no more. Here's the skinny on the upcoming demise of the star that you owe everything to: light, warmth, energy, and life.

1. Stars like the Sun will shine for 10 to 20 billion years. But the time that a star like this spends on the so-called "main sequence," as a normal, "adult" star, lasts for some 5 billion years. In 1942 astronomers demonstrated that once a star transforms 12 percent of its hydrogen into helium, it begins a new kind of stellar age. 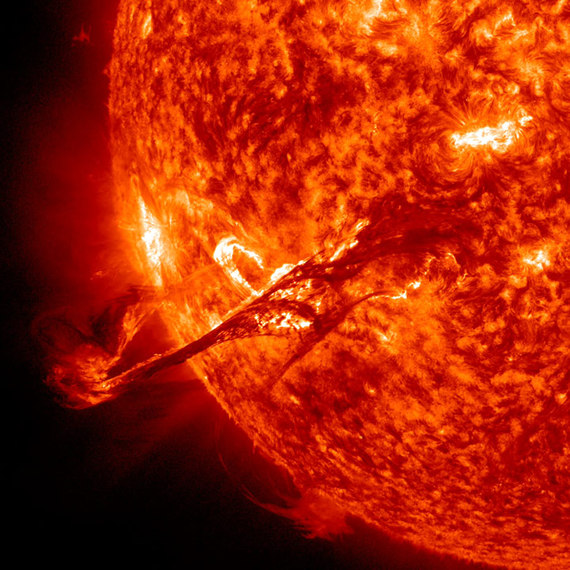 2. When a star begins to run out of nuclear fuel, the star turns off, almost like burning out. Because the heat is suddenly turned off, not to mention radiation pressure pushing outward, the star begins to contract.

3. Stars like the Sun face a curious path toward demise. In their old age gravity takes over as the fusion process shuts off. The material left in the star begins to push inward into a smaller and smaller space.

4. Amazingly, the Sun's average density is pretty close to water. As the dying star falls inward, the Sun is destined to become a red-giant star, and its outer envelope inflates and is shed outward. The Sun's diameter will push outward as its temperature plummets. During the red-giant phase, the Sun's diameter will reach approximately where we are, at Earth's orbital distance.

5. As the Sun swells to a maximum red-giant diameter, it may engulf Mercury, Venus, and Earth, or at least push what is left of these planets outward. At this point the Sun will span 150 times its present size.

6. The dying star isn't completely dead yet, however. Gravity pushes shells of hydrogen and helium to densities where nuclear fusion can begin, and they are ignited, albeit for a short time. When this happens with the Sun, it will briefly be 2,100 times brighter than we see it now.

7. Some 7 or 8 billion years from now, the Sun will transform into a spectacular end state, creating a brief visual show in our part of the galaxy. It will first become a white-dwarf star, a degenerate remnant that is cool but incredibly dense.

8. The big show will come when the Sun transforms into a planetary nebula, a glowing series of shells of gas that expand outward at various speeds, putting on a fluorescent galactic performance that will last for 50,000 years.

9. As the dying star lumbers on, carbon plays a role as the most important byproduct of fusion. Carbon in the Sun's atmosphere will settle inward and add to a carbon-rich core. But the core will not ignite in nuclear fusion. Instead, it starts a fit of helium burning, casting the star's outer layers into interstellar space, forming "belches" of planetary nebula material.

10. The last helium flash, however, splatters dust and gas outward at higher velocities and shapes the planetary nebula by setting up collisions between the new "bullets" of high-speed material and the older, slower-moving shells.

11. Now the planetary nebula evolves its own personality. The white dwarf heats up, stripped of its layers, and ionizes the surrounding gas, heating it as ultraviolet photons rob electrons from neutral atoms. The gas glows like a fluorescent bulb.

12. Superwinds and fast winds roiling off the stripped star interact with the surrounding gases, sculpting the planetary nebula into one of a possible variety of shapes, from spheres to egg-shaped masses to bipolar, squashed ovals.

13. Interplay between the superwinds and fast winds from planetaries sets up some of the intricate architecture you can see in telescopes, with the appearance of a hollow shell carved out by the glowing boundary between the two winds. The shock front is what we see as the edges of the nebula; the hollowness inside is an illusion, as there's plenty of material inside the nebula, but it does not glow with excited atoms.

14. Magnetic fields also help shape the planetary nebula, modeling the last screams from our Sun, a nebula that will slowly fade away, leaving a tiny white-dwarf remnant star where once was a mighty solar system complete with a great third planet, full of civilization and promise.