I have a coffee shop scene burned in my mind that I cannot seem to shake: ten teen girls sitting in a circle, each one of them looking down at their smartphones. Eye contact did not appear to be on the menu that day.

My heart sunk a little as I thought of the unknown freedom I had experienced at their age. It was the freedom to watch my friend's smile form in reaction to news that I shared and to notice my mother's eyebrows lift as I showed her an award from school. It was the freedom to naturally develop an ability to read others' subtle expressions and nonverbal cues. It was essentially the freedom of growing up "unplugged."

In an effort to stay in touch with the audiences for whom I am designing out-of-school-time programs, I spend a lot of time contemplating and observing the social dynamics of youth. A few months ago, I wrote a post that highlighted "Invention Project," an innovation and entrepreneurship program geared toward sixth- to eighth-graders.

As my team members and I piloted Invention Project last summer, one of my first reactions was, "Look! Young people making eye contact and talking to each other!" Not only were they talking, they were also laughing, collaborating to create prototypes, designing trademark-worthy logos, pitching inventions and innovating.

The Value of Being Unplugged

The engagement I observed in Invention Project felt like the very opposite of the "teens-on-screens" scenario I had witnessed in the cafe — an all-too-common scenario that triggers concern in many parents, teachers, and youth mentors.

A key skill involved in reading nonverbal emotion cues is empathy. Empathy is the ability to understand, relate to and share the feelings of another person. A 2010 research study focused on college students' self-reported empathy concluded that empathy levels between 1980 and 2010 had significantly declined, with a steep drop in the preceding 10-year period.

Many of our lives will one day be in the hands of the individuals of today's tweens and teens. They will be our technicians, lawyers, financial advisors, nurses and doctors. We will hope that they "unplugged" long enough in their formative years to have developed their sense of empathy.

Empathy is highlighted as a major tenet of design thinking, which many inventors employ to guide them in creating world-changing innovations. We hear first-hand from National Inventors Hall of Fame Inductees, like physicist Ashok Gadgil whose empathy and technical know-how resulted in making water safe to drink for millions of people across the globe, how important it is for youth to develop 21st century skills of this nature. In fact, if you look at most innovations deeply enough, you will uncover the role that empathy played in their success. 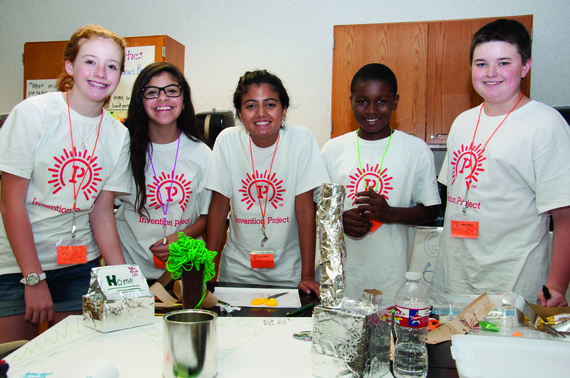 In one of Invention Project's 90-minute sessions, Innovators (program participants) watch a brief video clip of users struggling in various ways with earbuds. They observe the nonverbal cues of the users as cords tangle, ear pieces fall out, and one set of earbuds proves challenging to share between two people. Innovators empathize with the users' frustrations; discuss their observations within their teams, and finally, redesign a new set of earbuds. They are given access to materials, like sample earbuds, motors, LEDs, recyclable bits, and gearboxes, in order to design their prototypes.

One all-star team comprised of five Innovators from Allen, Texas, who named themselves the Peanut Clan (pictured here), designed cutting-edge, wireless earbuds, called "Peanut Budders." When asked about Invention Project, team members responded, "...my favorite thing would obviously be making new friends..." and "...we collaborate well together...that's what makes us a team." The value of the opportunity to work, create, design, and build together collaboratively was the clear winning ingredient in this recipe.

The Peanut Clan designed multiple inventions throughout the week, making thoughtful compromises that clearly reflected their application of empathy. They embodied the integrated spirit of invention, innovation, and entrepreneurship that we see as the winning trifecta for many of our Inductees in the National Inventors Hall of Fame and they exemplified the unlimited potential of "teens-off-screens."