We were sitting on the "yellow" couch when she texted. Those quotes are on purpose, that couch was a perfect shade of buttercup yellow when Jason and I bought it, young and newly married and so very sure that everything we had would stay shiny and well. "You might want to rethink that yellow," a friend said, head tilted, eyebrows raised. She had three kids when we had none and she knew from experience that children and life and living make a couch "yellow."

We didn't listen, and I'm so glad. I love this couch.

It's where Jason and I watched movies, snuggled under fuzzy blankets, feet carelessly tangled. It's where we passed each of our babies hand-to-hand out of love and awe and out of exhaustion and exasperation and out of routine and comfort. It's where our three children have played and giggled and read thousands and thousands of books. It's where our puggle slept. I love this couch.

But when she texted, it's where we were sitting because we were sad. 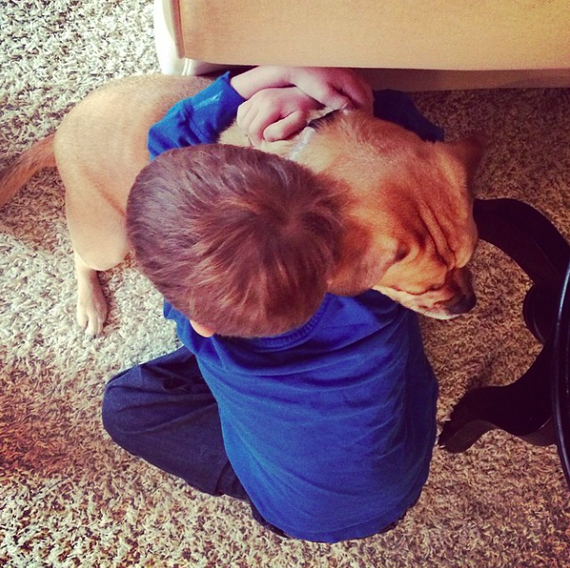 When we had to say good bye to our puggle this summer, it was our family's first real lesson that things don't always stay shiny and well. It was sudden and sad, and when we were home, we found ourselves migrating to wherever the rest of our five were. All of us piled onto the big bed, gathered around the kitchen counter, standing by the swing set, or sitting shoulder-to-overlapped-shoulder on the "yellow" couch all became parts of our well-worn routine.

That's how we were sitting -- overlapped and close, perhaps trying to squish away the sadness -- when her text came through, so we all jumped and laughed when my phone buzzed. Everyone leaned over to see what it said, even the non-reader amongst us.

"Are you home? We're dropping off a treat!" is what it said. So simple, so short, so direct, so nice.

When things happen that make us sad -- big things like losing a pet and little things like bad days -- it can be hard to reach out for the help and support and lift that we need.

But what we learned when we were sad is that, my goodness, people want to be there.

One friend dropped off a "Box of Sunshine" filled with (yellow!) things she knew would make me smile.

Many, many people sent cards. Real-live handwritten cards. There's nothing quite as delicious as ripping open a thick white envelope with someone you love's script scrawled across the front.

People sent texts and messages just saying they were thinking of us or sharing their own tales of puppies loved and lost.

One friend came over and told stories about Louie. Another's daughter told mine, "I loved him, too."

One friend brought us wine and chocolate. Special delivery, indeed.

Several friends offered to take my kids on outings. Others sent their kids over for sleepovers. Imagine how scary that must have been all the way around -- to send your kids (and for the kids to go) where the dog has been sick and the kids have been sad and the mom (and the dad) might cry at any time. But they did it anyway. They showed up.

And that friend who texted? She brought over homemade cookies and handmade cards and heartmade laughter for my children.

Were people really nice to us in 14,000 different ways? Of course not. But that's exactly how it felt. We were so loved and so held up and so taken care of that Jason and I would, quite often, catch each other's eyes just to say, "We're surrounded by good people."

And the common thread between them all -- the texts and the cards and the play dates and the care packages -- is that we didn't get, "Let me know if you need anything-s."

As kind as this gesture is, I would never think to follow up on it and actually ask for what I -- what we -- need. It would have put that responsibility in my hands, and I probably wouldn't have had the wherewithal to figure out what to ask for. The authentically good intentions would have gone unfulfilled.

But all of our people were so smart; they just showed up in the ways that they knew how to show love.

And it worked. All of that goodness lifted us.

I learned so much from the way our family was treated when we were sad. Last week, when a friend's husband had a sudden accident, I started to text, "What can I do?" The response probably would have been, "Nothing." Instead, I went with, "I'm dropping off lunch," and, that, she took. When I brought the comfort food over -- soup and bread and chocolate chip cookies -- we stood together in her driveway and she told her story and I listened and I showed up in the way that I knew how.

I've still faltered every once in awhile by putting the, "Let me know what I can dos," in other people's laps, but mostly I get it now.

You just show up, you show kindness, you show love in the ways that you know and that's how you make people feel like others are being nice to them in 14,000 ways.