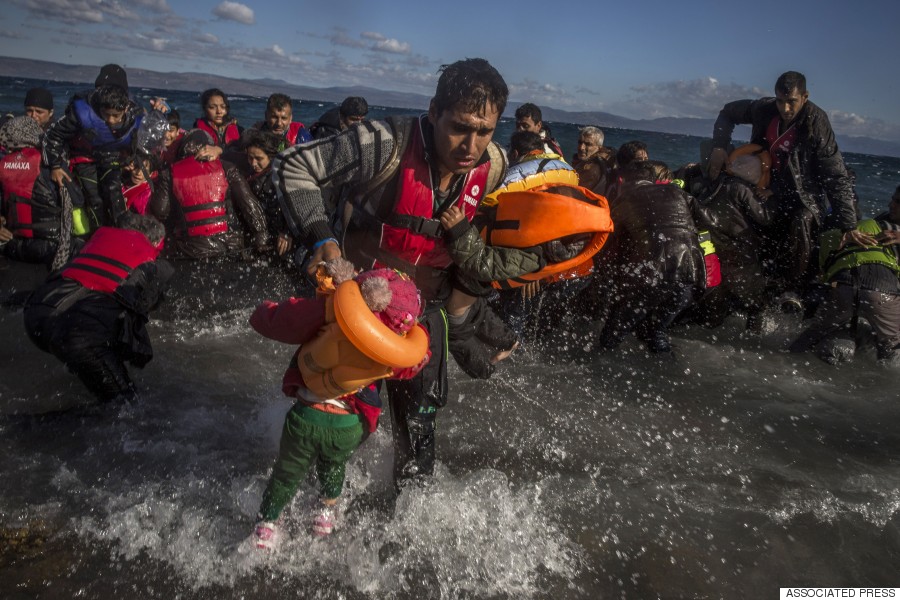 The WorldPost commissioned countless blogs this year from our contributors around the world. Their big-picture analysis, context and insight illuminated the "how," "why" and "what next" of the globe's most pressing news events. Often writing about countries where they live or are from, our contributors made us think differently about world affairs by opening our eyes to new perspectives. Here are a few of their pieces from 2015 that you won't want to miss.

"As we enter the latter half of the 21st century's second decade, the hope that the world was entering an era of great promise and convergence has been shredded by two poorly recognized 'world wars.'"

"It must be emphasized that true secularism is not opposed to religion, and a secular democratic state will not only eliminate ethnic and religious discrimination, such as pitting Shiites against Sunnis, but will also create the conditions for religious people to practice their beliefs free of the government. Islam and secularism are completely compatible. In fact, a true 'Islamic state' is not only unjustified, but also impossible to establish."

Why 17 French Murders Get More Attention Than as Many as 2,000 Nigerian Murders

"The Western media is not paying attention to the tragedy in Nigeria, where perhaps as many as 2,000 people were slaughtered by Boko Haram. You may conclude, as many have done on social media, that this is due to inherent racial biases of Western media. However, your anger at Western media for the lack of coverage on the massacre in Baga is misplaced. Here's why."

"There has always been one major point of dissent between Al Qaeda and ISIS: Al Qaeda's leadership has said, openly, that it believes that ISIS had erred by proclaiming the Caliphate, the Islamic State. If ISIS begins to lose its distinguishing feature -- that it is a territorial power in Syria and Iraq -- then perhaps its leadership might conclude that Ayman al-Zawahiri was right and that ISIS must adopt Al Qaeda strategies." 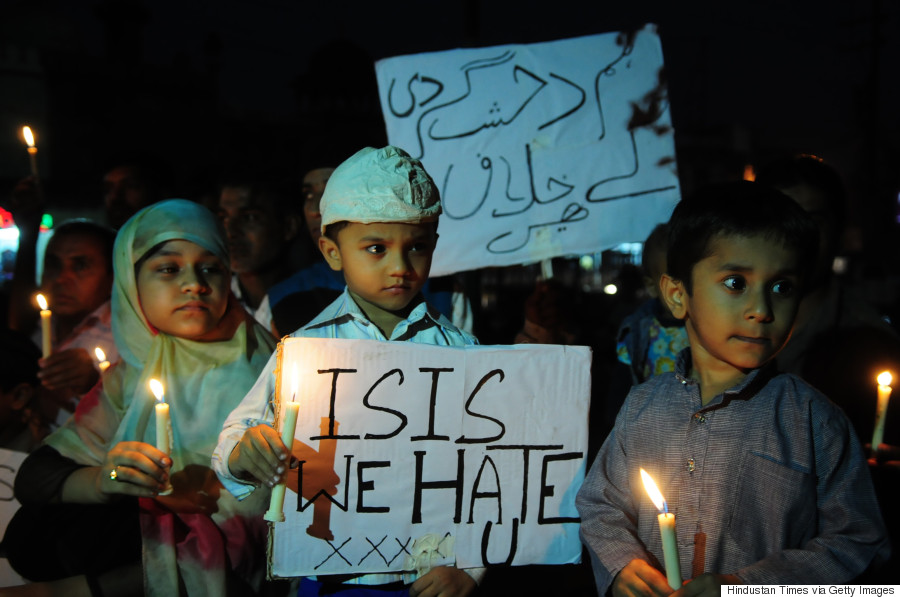 Muslim kids in Bhopal, India hold placards with slogans against ISIS during a candle light vigil to express solidarity with the victims of the Paris terror attacks on Nov. 15. (Mujeeb Faruqui/Hindustan Times via Getty Images)

Not Even James Bond Can Rescue Mexico's Image

"While James Bond is cavorting in downtown Mexico City among giant skeleton props, leaping over rooftops and jumping into helicopters in a fictional exercise the government hopes will bolster Brand Mexico, Mexicans all over the country are clamoring for a new deal and real justice."

"The interconnected nature of the world thanks to information technology and globalization creates an acute awareness about opportunities elsewhere. Deprivation is no longer an absolute, isolated phenomenon -- it's relative."

"U.S. presidential candidate Donald Trump does not seem to understand the dangers in the kind of rhetoric that he is using. While we may be a long way away from Kristallnacht, it is worthwhile to point out the signposts on Germany's path to that fateful night. Trump has taken the first tiny dangerous steps towards unleashing forces that could trigger large-scale violence against the Muslim community."

Argentina Shows Greece There May Be Life After Default

"Defaults are difficult. But even more so is austerity. The good news for Greece, as Argentina showed, is this." 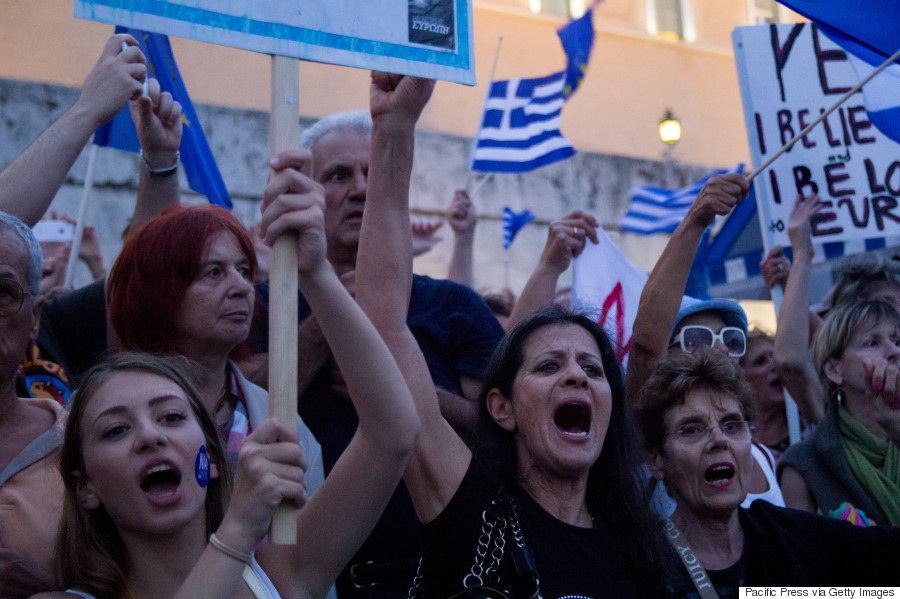 People demonstrate in front of the Greek parliament in favor of 'Yes' in the referendum. (Kostas Pikoulas/Pacific Press/LightRocket via Getty Images)

"For centuries, the historical Silk Road connected Asia and Europe by land and by sea. The new proposal of China, while reviving the ancient concept of the Silk Road, aims to carry forward the spirit of peace, cooperation, openness and inclusiveness for shared benefits. There has already been a warm response from more than 60 countries and a number of international organizations."

Why India's Intolerance Problem Is Hurting Its Global Reputation

"We cannot simultaneously sell ourselves to the world as a land of pluralism, tolerance and Gandhianism, while promoting intolerance, communal hatred and minority insecurity within the country. It is time Indian Prime Minister Narendra Modi and his government learned they cannot promote 'Make in India' abroad while condoning the propagation of 'Hate in India' at home."

How Would You Feel If China Flew Spy Planes a Dozen Miles From the California Coast?

"It is hard to see why Washington should regard China's conduct as so threatening to regional order that it should hold the whole U.S.-China relationship hostage over it. From Beijing's perspective, the more China presses U.S. allies and defies U.S. criticism with impunity, the further the credibility of U.S. leadership in Asia falls."

Why I Published Cartoons of Muhammad and Don't Regret It

"The right to ridicule and mock religion and other ideas is an inseparable part of life in a democracy. In a democracy, nobody has a right to impose its taboos on society at large. And when that happens, it's important to confront it and have a debate because it violates the secular order -- the separation of state and church. The cartoons stress the point that a secular democracy doesn't ask more of Muslims and it doesn't ask less. It asks of Muslims exactly the same as of any other group in society." 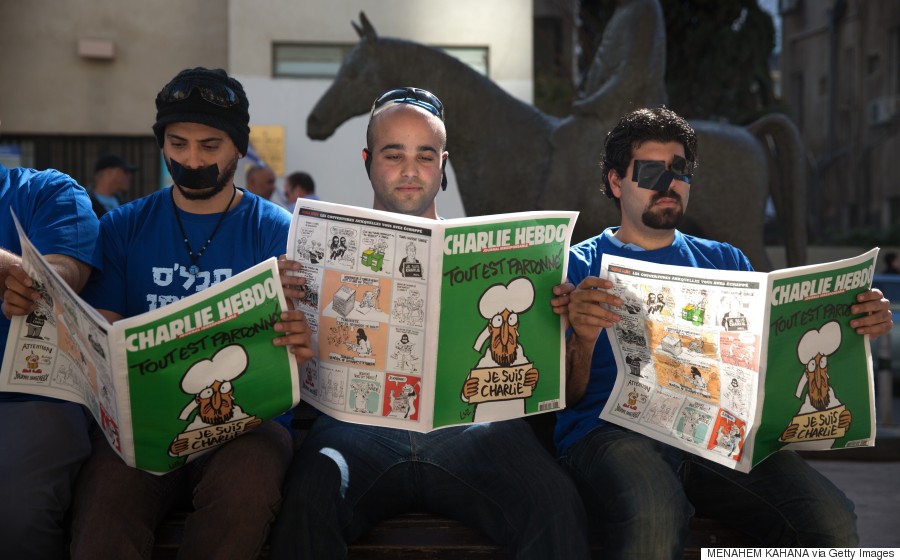 Israeli protestors hold copies of the latest issue of French satirical magazine Charlie Hebdo during a demonstration calling on Israeli authorities to allow the sale of the controversial magazine in the country, on Feb. 5 in Tel Aviv. (MENAHEM KAHANA/AFP/Getty Images)

No, Islam Is Not Inherently Misogynistic. Here's Why.

"The advent of Islam sought not only to introduce a new kind of social order but to limit the excesses of Meccan society, which directly harmed women and girls. Early Islam sought to elevate women and define them as independent agents possessed of free will, responsible for their own actions and imbued with certain rights and privileges over men."

Immigration Is Good for Economic Growth. If Europe Gets It Right, Refugees Can Be Too.

"Economists tend to see a large influx of refugees not as an obligation or a threat -- but as an opportunity."

"I recently received an interesting package in the mail. It looked like a standard manila envelope, but inside was a device that could quite possibly revolutionize the way we view the microscopic world. I'm referring to the Foldscope, an origami-based optical microscope that is small enough to fit inside your pocket. The real kicker: the entire cost of the instrument is less than one dollar."