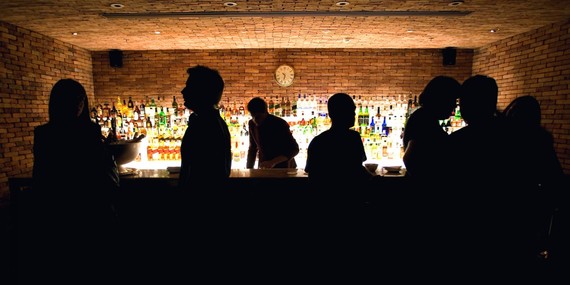 If there's one thing drinks connoisseurs love, it's jargon. Brewers, distillers, wine and beer sommeliers, bartenders: They're all into whipping out specialized vocabulary about their work. Whether you're a boozehound or a newb, these are the words you should know to sound savvy when you're mixing or ordering drinks.

1. ABV
ABV stands for alcohol by volume, a measurement of a beverage's alcohol content as a percentage of ethanol to fluid volume. A liquor's proof is defined as being twice the ABV percentage -- so a whisky that's 80 proof will have 40 percent ABV.

2. Aperitif
Alcoholic drink intended to stimulate the appetite, usually dry rather than sweet. Classic apéritifs include dry white wine or Champagne, cocktails that include vermouth or bitter spirits like Campari and wine-based liqueurs like Dubonnet or Lillet.

3. Back
A small non-alcoholic beverage, usually taken alongside neat spirits or a shot. When the back is taken after the drink instead of with it, it's known as a chaser. A "bar back," however, is an industry position, the person who is responsible for restocking the bar during service but generally doesn't serve customers -- also sometimes known as a bar runner.

4. Bitters
An aromatic botanical or herbal infusion used to add flavor to cocktails and mixed drinks. These are sometimes alcoholic, sometimes not.

5. Box
A mixing practice where a drink is quickly poured into the cocktail shaker then into the glass, so that ingredients are thoroughly blended without shaking.

6. Bruised
A cocktail or martini is "bruised" when it's been over-shaken, adding slivers of ice and oxygen bubbles to the drink that give it a murky or cloudy appearance. Among pros, bruising cocktails is considered the mark of an amateur.

7. Call Drink
A mixed drink or highball where the liquor is named by brand, such as a Jack Daniel's and Coke (aka Jack and Black) or Blue Sapphire and tonic. When ordering, name the booze first, followed by the mix.

8. Cicerone
A cicerone is a beer sommelier, an expert consumer of international, specialty and craft beers. The name "cicerone" is a private trademark for a training program -- adapted from the Italian word for a museum tour guide -- but the term is also used to describe beer-tasting professionals outside the program.

9. Cocktail
Most people call any mixed drink a cocktail, particularly if it includes juice, but technically to be defined as a cocktail a beverage must include four elements: bitters, spirits, sugar and water. So, an Old Fashioned or a Manhattan are cocktails, while a Mimosa is not.

10. Digestif
An alcoholic beverage served after a meal to stimulate digestion. Classic digestifs include brandies, whiskies, fortified wines and liqueurs.

11. Dirty
Includes a splash of olive brine that "dirties" clear spirits. The term is mostly used with reference to martinis, but any clear booze (vodka, gin, white rum or tequila) can be ordered dirty.

12. Dry
Mostly used to refer a martini with little to no vermouth, a dry drink can also be a cocktail or mixed drink with very little mix (the non-alcoholic component).

13. Finger
An informal measurement, indicating a spirits pour about the thickness of a finger in the glass, which works out to about 1 ounce.

14. Float
Layering an ingredient at the top of the drink. Classic drinks with floating liquor include the "striped" B-52 shooter or the Harvey Wallbanger cocktail -- the latter takes a small float of Galliano to distinguish it from a Screwdriver. This is also sometimes known as "lacing."

15. Free Pour
Adding alcohol to a drink without measuring.

Do you like your drinks rinsed or rolled, topless or muddled? Head to AskMen for more bartending terms that will help you order at the club like a pro.

This article was written by Emily Raine for AskMen. Photo credit: Getty Images