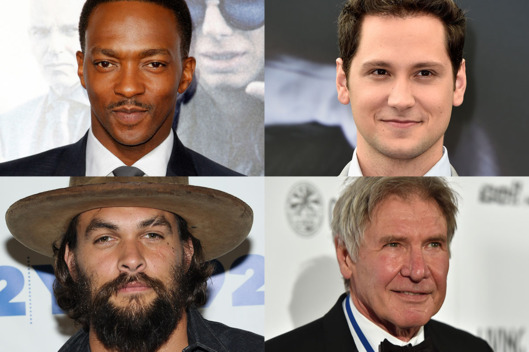 It's a question the media often asks women but rarely men: Are you a feminist? When we presented 15 famous men with this tired query, we found that their answers didn't range too far from the ones that famous women often give. Some pleaded ignorance; some offered platitudes about how much they value female power; some gave a well-informed yes. Darren Aronofsky replied with the one response women never seem to offer: "It's a stupid question," he said, and walked away. Read on for more thoughts from Harrison Ford, Cheyenne Jackson, Zachary Quinto, and more.

Related: What Open Marriage Taught One Man About Feminism

Jason Momoa
"I wasn't raised by a man. I was raised by a single mother my whole life. It'd be ridiculous for me to say that I didn't believe in it. They're the strongest beings in the world."

Salman Rushdie
"Yes. What else is there to be? Everything else is being an asshole. These are your choices. I have three sisters, and no brothers. In my family it is all women, and they are very strong, opinionated, professional women, and the idea that they would be in some way disadvantaged by comparison to men was just ludicrous, and if you had tried to suggest it to them you'd have got hit. So I learned it early."

Desmin Borges
"Some of the most important people in my life have been women, the entire time while I was growing up, and some of the most influential people that I know are women. I think it's time that everyone gets paid equally and gets an equal opportunity to voice their opinions and their talents just like everyone else."

Michael Stuhlbarg
"I'm not educated enough about the title to understand thoroughly what it means, but I'm a huge advocate for women's rights and their right to choose whatever they want to do. So if that means I'm a feminist, then yeah, I'm a feminist."

Related: 25 Famous Men on How Clothes Make Them Feel

Gaspar Noé
"Some men can be feminists. I'm trying to be."

Anthony Mackie
"That's a very strange concept to me, and I don't think I know enough about it to answer that question."

Cheyenne Jackson
"A feminist? Of course. I mean all of the things that being a feminist stands for. I very much liken it to being a gay man. We have always been like, Hey, what about me? It's the same kind of thing. Little by little it's coming along."

Harrison Ford
"Yeah, because I like women and I respect women."

Zachary Quinto
"I think the idea of being a feminist is evolving in our world. Especially now, with these movements toward equality of all kinds, I feel like I don't limit it to feminism, I just sort of consider myself a humanist, I imagine."

Kelsey Grammer
"Oh gosh. Oh yeah, I've always been a feminist. I think that feminism includes just being proud and comfortable in your skin as a woman and a man being comfortable in his skin. That's where I live with it. I'm a huge supporter of women."

Phil Donahue
"Well, I better. I sleep with one [wife Marlo Thomas]! My program featured all the feminists, from Betty Friedan through Gloria Steinem, Bella Abzug, Robin Morgan. They've all been on my program, and they did a lot to change me."

Denis O'Hare
"Absolutely. I always have been. I think it's shocking how much more work we have to do. Someone like Paul Ryan who can actually say that he'll take a job only if they will allow him to spend more time with his family -- well, what woman gets to do that? Does she get to negotiate that same package with her job or is she told to take a hike? We have a long way to go. We need a woman president. It's about time, as an example."

Senator Chuck Schumer
"Yes. I think women are one of the great untapped potentials of our society. Women are as talented, and sometimes more talented than men, but the old barriers that hold people back are still there. When I choose candidates for the DSCC [Democratic Senatorial Campaign Committee], all things being equal I always prefer a woman candidate because they are better candidates and they are better senators."

Matt McGorry
"Oh, absolutely. In my understanding, it's like what it might be like to be a Catholic. You can be like, Oh, I'm a Catholic; I go to church once a year. Or you can be the pope. ... Ultimately, if there were as many male feminists as there are female feminists, we wouldn't need to be fighting for equality."

Darren Aronofsky
"Yes. Absolutely, of course. It's a stupid question. Sorry." [Walks away.]

*These interviews have been edited and condensed.

How Do You Spot a Male Feminist? He'll Tell You
15 Ways to Wear Sweatpants to Thanksgiving Dinner
Busting Gender Stereotypes on MTV
The Unexpected, Exhilarating Freedom of Being Single at 41
25 Hot Men in Turtlenecks to Warm Your Heart

15 Famous Men On Whether Or Not They're Feminists
The Multiple Facets Of Modern Feminism
1 / 11
Social Media Feminists: Laura Bates
Laura Bates, founder of the <a href="http://www.everydaysexism.com/index.php/about" target="_blank">Everday Sexism Project</a>, has a simple mission - to raise awareness of the sexism that still exists "in a modern society that perceives itself to have achieved gender equality". Bates seeks to overturn this perception with an open invitation for all women to record their personal daily experiences of inequality online. The project has already garnered a collection of over 10,000 women's anecdotes. Aiming to remove the 'uptight', 'prudish', 'militant', 'bra burning' labels historically associated with feminists, Bates is one of a new wave of feminist activists using social media and technology to make feminism more accessible to all women.
YouTube