Daniel Ziv's first documentary feature, Jalanan (Streetside), is premiering as an official selection in competition this week at the Busan International Film Fesival in Korea. The TV version, Street Ballad: A Jakarta Story premiered last year on PBS Television's acclaimed Global Voices series, and was chosen by the NY Times as one of its Best Shows of 2012.

Jalanan tells the story of three gifted, charismatic street musicians in Jakarta, Indonesia over a tumultuous 5-year period in their own lives and that of Indonesia. The film follows the young marginalized musicians and their never before seen sub-culture, while also painting a striking, moody and intimate portrait of Indonesia's frenzied capital city. Using the powerful soundtrack of the musicians' original compositions to drive the film, it traces their elusive quest for identity and love in the day-to-day of a city overrun by the effects of globalization and corruption.

Canadian Daniel Ziv moved to Jakarta in 1999 and began documenting urban life in Indonesia's bustling capital city as a writer, magazine editor and filmmaker. He founded and edited the popular monthly Djakarta! -- The City Life Magazine. He is author of the urban pop culture book Jakarta Inside Out, an Asian bestseller, and its follow-up volume, Bangkok Inside Out.

RIO HELMI: It's hard to believe, but you've finally (just) completed the Jalanan and Street Ballad: A Jakarta Story film sagas... It's only been six years. Personally I will go on hunger strike if it doesn't win at least one award. So what's next, another film already conceived?

DANIEL ZIV: That's very kind, and I will try to support you during your hunger strike. It's been an exhausting journey with these films, but I've learned a ton in the process -- like a film school and PhD rolled into one, at alarmingly similar cost in both time and money. But there's huge satisfaction in being able to bring a really heartfelt and important story to the big screen, to create a meaningful body of work that didn't exist before, to potentially influence how people view Indonesia and social justice issues.

I'd love to keep making films, but I want to see how Jalanan is received and whether it finds a wide audience. I have no desire to be one of those vanity artists who makes films for just himself and his highly objective mother. So we're now aiming for a theatrical release in Indonesia, which is very unusual for a documentary here. If Jalanan resonates strongly, I'd love to do another film. But I'll choose the topic very carefully, because I now know what a huge commitment it is, how deeply immersed you need to be in your subject and the stamina required. Werner Herzog famously described documentary filmmaking as a long-distance sport. That's so true, and probably even an understatement.

RH: What drove you to make Jalanan? Why street musicians?

DZ: I came up with Jalanan not because of any ambition to become a filmmaker or a pre-meditated quest to find a 'good topic' for a documentary, but because one day on the streets of Jakarta I stumbled across a gang of unique individuals whose amazing life story I could not ignore. I was drawn into their world, and the more time I spent with them, the more I realized their tale deserved to be told.

I've been documenting people for years through magazines, books and photographs, especially in Jakarta. And I've always been more fascinated by those living in the margins of society rather than the mainstream, because their stories are more interesting, they are frequently more honest and their lives reveal more to us about society in general. And one of those stories -- a sub-culture, really -- was the community of street buskers known as pengamen. They were totally unique: their lifestyle, their music, their social and political outlook. To listen to them is to hear a side of Indonesia we barely know is out there. And while it's an unusual perspective, it's also utterly human and endearing, because these people are the real deal -- flaws and dreams and challenges and all. Their lives aren't just about mimicry.

But the project shifted its focus over the course of time: I started out shooting a film about Jakarta street buskers. About a year into it, it was clear that this was a much wider film about Indonesia -- a sort of raw snapshot of the country at a fragile time -- and that street buskers were really just the lens through which we could manage a far bigger, more complex view of the country today.

RH:You have a much more in-depth experience of Indonesia than 95 percent of the expats here. Would you recommend a cure for them? Does it matter?

DZ: Ultimately, engaging the country and culture in which you live is a personal choice, and may not be for everyone. For me it's incredibly rewarding and I can't imagine missing out on that thrill. But just as we don't tend to judge a native New Yorker who chooses to work at a suburban neighborhood bank and disconnect from the politics and culture of his country and city, I suppose an expat here can claim the same right. It only matters insofar as that the expat is missing out on entire layers of the place they live -- usually the most interesting layers -- and I think that's part of what breeds bitterness, detachment or just discontent. It goes back to learning the language: once you speak the local tongue, a ton of stuff becomes easy and fun, and this whole other world opens up to you. I am sure this is true everywhere.

RH: You are all over social media, and Twitter has become part of your public persona, with over 50,000 followers. Was all this intentional? If so, why? If not, how did that happen?

DZ: The Twitter thing wasn't planned. In fact before joined the platform I smugly dismissed it as something like the ultimate dumbing down of human communication. But that was an unfair judgment. Now I regard Twitter as a value-neutral medium, much like other social media platforms such as Facebook and Instagram, or indeed the Internet itself. It totally depends on how we use it.

In Indonesia especially, Twitter is where potent conversations occur on issues affecting society, and is to some extent an expression of the pulse of this country. So I'm grateful to have found a voice there, and some kind of strange following. And to be able to express that voice from anywhere at any moment is a pretty amazing thing. I get to directly interact with senior politicians, reporters, talk show hosts, business tycoons, novelists, pop stars, Islamic scholars, political commentators, movie producers and influential bloggers. They are all on Twitter here and, amazingly, they listen.

DZ: Honestly, I rarely ever function at full steam. I'm disappointingly unprolific (six years to finish one-and-a-half films), an awful manager of my own time, and far too easily distracted. So whatever I've produced until now has been despite my personal traits, not because of them.

Inspiration has never been a problem for me. My head is full of ideas, I've never been bored in my life, and I've got a mental list of at least 15 creative projects I'd love to execute. But making these things happen requires discipline, focus, solitude and very hard work, and it's rare that I can muster up all those things at once. So yeah, deadlines help, even as they terrify me. 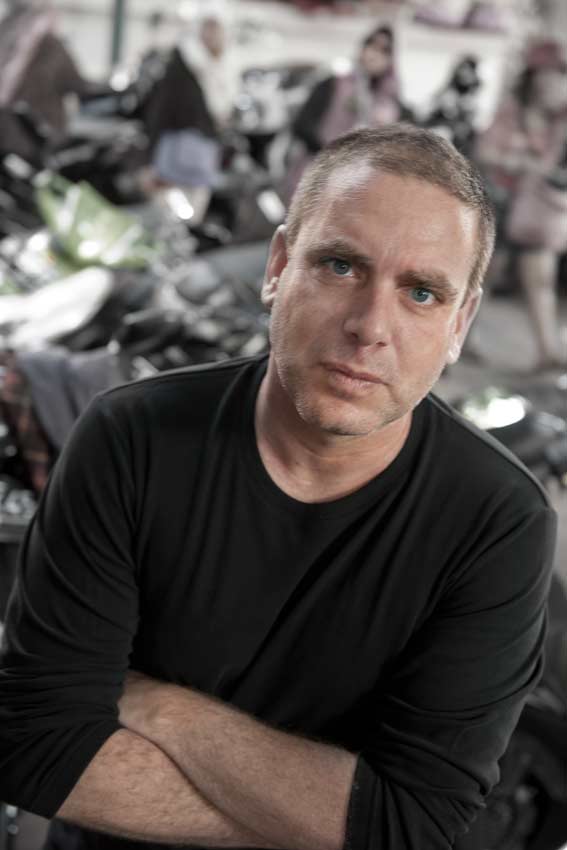 Daniel Ziv on the streets in Indonesia ©Rio Helmi

documentary photographer and writer working in Asia since 1979