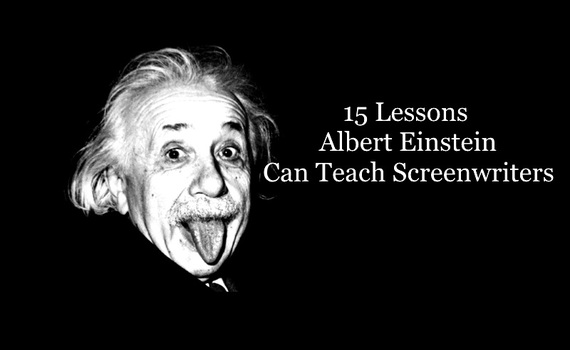 Albert Einstein (March 14, 1879 - April 18, 1955) was one of the most brilliant minds that this world has ever seen. The famous theoretical physicist developed the theory of relativity and is considered to be the father of modern physics.

Because of his brilliance, many sought his outlook and perspective on a number of different topics beyond science. Below we take many of his most famous inspiring quotes and apply them to the art, craft, and business of screenwriting, for wisdom has no bounds.

1. "Everything should be as simple as it is, but not simpler."

Too many screenwriters make a simple concept, character, or moment more difficult than they need to be within their scripts. They're all too often advised to make things more complex, as if that automatically leads to a better result in the end.

Others over-simplify things and don't offer the concept, characters, and moments any depth.

Find the right middle ground and choose your battles wisely as far as when and where you'll offer less or more.

If fame and fortune is why you want to become a screenwriter or filmmaker, you'll burn out quickly. A majority of those attempting such a career will never see that. Instead, focus on what value you are going to bring to film and/or television. What difference can you make? What impact can your writing make? Chasing dollars and headlines will get you nowhere.

We know the general guidelines and expectations of the film and television industry. We know the various directives and hard truths. We write about (ScreenCraft) and read (you) things like, "Don't say this in meetings," "Don't write these types of scripts," or we see certain genres and trends are killing it at the box office and Award ceremonies and we try to emulate those in our writing and business dealings.

What Albert is saying is that these things that we see and hold so high aren't always so. You can't always count on what has been successful -- or proven to be true -- before. We must play the better odds in life and in a screenwriting career, sure, however, sometimes we have to take those shots in the dark against the wind and see if we can hit that target.

The screenwriting context of this isn't as over-powering as the quote, however, it has a context that fits.

Great screenwriters and filmmakers -- storytellers -- have always encountered opposition from mediocre minds, often in the guise of producers, development executives, representation, etc. It happens. You'll receive notes from the powers that be that just don't make sense. Your script will be rejected by most for questionable reasons.

This has happened to all of the great storytellers of our generation and before (Alfred Hitchcock, Steven Spielberg, Quentin Tarantino, Aaron Sorkin, etc.) and it will continue to happen to those that come after them.

Just grind your way through it.

5. "In the middle of difficulty lies opportunity."

When you're struggling with a script, a character, a scene, or whatever it may be, THAT is all too often when the most brilliant answers come to light. Challenges ignite the creative spark in our minds. The brain works in mysterious ways. It often finds the best solution when against the most opposition.

So write and think your way through those difficult rewrites and writer's block. That's where the good stuff is born.

6. "A human being is part of a whole called by us the universe."

So take comfort in that and be humbled by it at the same time.

7. "A man (or woman) should look for what is, and not for what he thinks should be."

8. "A person who never made a mistake never tried anything new."

The mistakes you make as a screenwriter or filmmaker will make you better. You need to make them to evolve. If you stay in a certain genre or write the same way over and over, you won't be challenging yourself. If you're not challenging yourself and getting out of your comfort zone, you'll never make those necessary mistakes. And if you don't make those necessary mistakes and learn from them, you'll never by a better storyteller.

9. "Anyone who doesn't take truth seriously in small matters cannot be trusted in large ones either."

In Hollywood meetings and communication, if you try to bulls*** your way through the process, the powers that be will quickly pick up on that and won't trust you with big assignments, etc. Lying about your past "successes" and lying about applying their notes, or any variation of lying or misleading anyone in any context, will get you nowhere.

10. "Any intelligent fool can make things bigger and more complex... It takes a touch of genius - and a lot of courage to move in the opposite direction."

Less is more. This can be especially applied to the rewriting process. Cutting scenes down to the core is much more difficult than adding complexity and overwriting them. The best screenwriters can find the core of each scene, character, and moment, and communicate that in the most simple of ways for the reader and eventual audience to embrace. That is what makes an otherwise good screenwriter truly great. Master the concept of less is more and you'll be well ahead of the pack.

The constant rejection that screenwriters face on a daily basis often causes many to become cynical and overtly angry towards the film and television industry.

Screenwriters need to embrace the rejection. It should make you want it more and work harder to hone your craft, market your scripts smartly, network better, etc.

Anger only leads to the dark side.

12. "Everyone should be respected as an individual, but no one idolized."

The gurus out there with books, seminars, and workshops are good food for the brain to consider and apply to your own process and direction when needed, however, their declarations, formulas, and "secrets to success" should never be idolized to the point where a screenwriter tries to emulate them to a tee.

As a screenwriter, you need to find your own way. There's no one single path to great writing and success.

13. "He who can no longer pause to wonder and stand rapt in awe, is as good as dead; his eyes are closed."

All too often, some screenwriters feel that they need to be overly analytic. It even translates to watching movies, where they pick apart various elements of the story, characters, etc.

Cinema is magical. It always will be. It's okay to sit in that theater in wonder and awe. It's okay to lose yourself in the process of writing a screenplay. It's okay to have fun doing it and to, more often than not, let the story and characters find you. It's not just okay to allow those things -- it's necessary.

14. "Information is not knowledge."

Studying endless film theory doesn't make you an excellent writer. Nor does knowing various guru formulas/beat sheets, knowing each and every line in Casablanca, or knowing the percentages of successful -- or unsuccessful -- genres and other analytical information.

15. "Only one who devotes himself to a cause with his whole strength and soul can be a true master. For this reason mastery demands all of a person."

Screenwriters have to commit. They have to write each and every day, whether it's physically typing or writing in their head, developing those concepts, stories, characters, and moments.

And writing one script isn't enough. You have to stack your deck by writing as many as you can. You learn with each and every script.

Screenwriters don't always have to go to famous and Award-winning screenwriters and filmmakers to learn. Wisdom is everywhere.