Movies are magical. The good ones hold you captive in a great story, to a different time and place, and then bring you back home. In two hours, they leave you changed, having learned new things and lived a different life. I am a movie buff. I love how a good film can introduce you to a fictional world and in many cases teach you about your own life.

In that spirit, here's a list of my top 15 films that have entrepreneurship and business as central themes. Not only are they incredibly entertaining, they teach values important to anyone doing business. Every entrepreneur--from aspiring to longtime business-owners--will find new clues for, tips about, and snapshots into the trials and tribulations of owning your own business.

1. Jerry Maguire (1996). Tom Cruise plays the lead agent in this story, who gets fired from his company for writing a memo on ethics. He is inspired to start his own business with his secretary and goes through all the woes and thrills of start-up. It is perhaps one of the best portrayals of these stresses, and many have learned significant lessons in starting up from Jerry.

Jerry Maguire, as portrayed by Tom Cruise, experiencing the stress of starting a business (source)

2. It's a Wonderful Life (1946). Incredibly, when this film first came out in post-WWII America, it was widely panned. Today, it is considered a classic; and many call it one of the greatest films of all time. This film, like none other, reveals the emotional depths of business ownership, by depicting the main character at a suicidal low as he prepares to lose his beloved Building and Loan.

3. TenNineEight (2009). This powerful documentary follows low-income students around the country in their efforts to enter the national business competition run by NFTE every year in New York City. The movie features some of the greatest interviews of young entrepreneurs ever done and innumerable business lessons.

4. High Noon (1953). A classic Western, this film does not work directly with themes of business and entrepreneurship. Instead, its central storyline gets to the heart of good business: integrity and doing the right thing. One scene in particular stands out: newlyweds Gary Cooper and Grace Kelly are fleeing the town when Cooper has to turn around to defend the town from bandits. This is one of the finest cinematic portrayals of integrity; the kind of integrity every entrepreneur must strive to have. 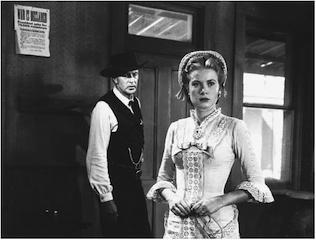 Cooper's integrity is an example for all business people (source)

5. Other People's Money (1991). This is a wonderful and entertaining movie. Danny DeVito does a great job playing Larry the Liquidator--and I have never seen such a spot-on discussion of debt and equity on film. A powerful look into this world.

6. Skater Dater (1965). A silent documentary about skateboarders in Southern California, it is my personal favorite. At first glance, it has no business connection but the values radiate: teamwork, cooperation, and striving for best effort. Even though you probably have not heard of it, this 17-minute-flick won many awards around the world and the young actress in it went on to become a famous photographer within the industry. Best part? You can watch it any time on youtube.

7. The Doug Flutie Pass (1984). This is not a film but a minute long-clip that can be accessed around the world. It shows Boston College leading their fight over Miami--Doug Flutie and his roommate had practiced the play in their minds hundreds of times. It is a great example of the power of the subconscious. They envisioned the future, created this moment, and then executed it superbly at a pivotal moment. 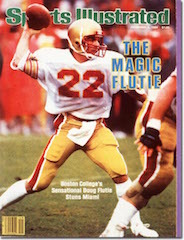 8. & 9. Godfather I (1972) and Godfather II (1974). While these films glorify crime and transform criminals into heroes in an unforgivable way, the story development and scenes illustrate so many lessons in business. I recommend that every entrepreneur to study these films to clarify issues of integrity, values, negotiations and strategy.

10. Working Girl (1988). Perhaps one of the greatest business movies of all time, it tells the struggle of a young female executive as she fights for fair treatment in the corporate world. It gives us numerous insights into human behavior and gender issues in business. This one is an absolute must-see!

11. Wall Street (1987). Michael Douglas's infamous speech in this 1980s classic gets right at the center of greed in business. While ingenious and honest, it does misrepresent the fact that many entrepreneurs operate in ways that can lead to both long-term profits and personal satisfaction, along with the ability to change society forever. It is still worth watching with many great lessons and the opportunity for critique.

12. Risky Business (1983). This is Cruise's breakthrough film, which follows his character along a true entrepreneurial journey. He identifies a market--although an inappropriate one--and begins his business. The negotiations are very well done, and the ambiguity and stress of running a business come through strong--these are two hallmarks of entrepreneurship. 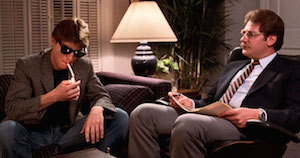 13. Up in the Air (2009). This might be George Clooney's greatest film. It shows a painful point in business, through which every entrepreneur must go: adjusting your costs by lowering your headcount. From my own experience, I know that if you are not willing to do that and to learn to do it in a kind and passionate way, your business won't last long. Markets go up and down--and your costs will always have to adapt to the market.

14. Pursuit of Happyness (2006). This is an incredibly inspiring true story that will speak to anyone who has known both the curses and the blessings of trying to make it in business--even when it seems every door closes in your face. A true story that follows an entrepreneurial spirit portrayed by Will Smith, as he sacrifices and loses everything for his business dream. Later a chance encounter leads him to an internship at a brokerage, and in the end, to owning his own firm. 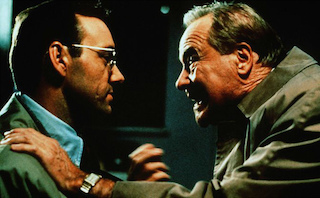 The tension and stress of sales--and how not to succeed in sales--from Glengarry, Glen Ross (source)

15. Glengarry, Glen Ross (1992). No film since this one has illustrated basic sales concepts more clearly. Based on the famous Mamet play, most of the film shows you how not to do it. The brutal honesty in many of its scenes and the genius of the acting will provide many lessons in starting a business.

I hope this list of films and clips will help you; I urge every entrepreneur to watch these, and to study their lessons.