There has to be some significance in the fact that June is the month to honor both the LGBTQ community and black music.

As festivals are being held throughout the world this June in honor of LGBTQ Pride Month, homage is simultaneously being paid to black music pioneers in acknowledgement of Black Music Month.

While already facing the ever-present challenges inherent to blackness, a number of black musicians have still been gallant enough to claim sexual identities that could hamper their success.

So in honor of these black artists who are boldly standing in their truth, we’ve rounded up 15 musicians of color who are unapologetically here and queer.

The Atlanta native who emboldened us to think clubbing on “Tuesday” was acceptable in 2014 performed a bolder act this January when he announced that he was gay.

Given the hip-hop community’s reputation of homophobia, which is particularly geared towards gay men, iLoveMakkonen’s decision to come out to the public was commendably unapologetic.

The one thing rapper and poet Mykki Blanco isn’t lacking in is character ― which may be why the artist has gained the affections of thousands. Blanco, whose real name is Michael Quattlebaum Jr. wouldn’t be who he is without the vulgar lyricism, wry humor and free-spiritedness echoed in songs like “For the C**ts.”

Azealia Banks may be self-destructively petty and engage in strange chicken rituals, but there is one admirable thing about the “212” singer: she doesn’t want to be defined by her sexuality.

In 2012, she told The New York Times: “I’m not trying to be, like, the bisexual, lesbian rapper. I don’t live on other people’s terms.”

Rapper Siya first entered the public eye when she starred in Oxygen reality show “Sisterhood of Hip-Hop.” Since then, she’s become a regular on the series and has teamed up with R&B artist Tank for a few musical collabs.

Angel Haze caught the internet’s attention in 2013 with their painful recollection of childhood sex abuse in a rendition of Eminem’s “Cleaning Out My Closet.” The song inspired conversations about how rap can confront rape culture and Haze has since had a number of singles.

Frank Ocean fans were annoyingly shook when the “Thinking About You” singer revealed that he once fell in love with a man in a 2012 Tumblr post.

After the revelation, the public didn’t hear much from the generally reclusive singer until last year. Following the the mass shooting at Pulse nightclub, Ocean took Tumblr to share his experiences with homophobia following the horrific attack which targeted the LGBTQ community last June.

Ocean’s letter expressed his devastation in the wake of the shooting and even referenced his father’s own prejudice toward the LGBTQ community.

The self-described “Queen Diva of New Orleans Bounce,” Big Freedia thrust herself into southern hip-hop culture in 1999 ― but it wasn’t until a decade later that she gained widespread recognition. Freedia’s larger-than-life persona attracted shot-callers at TV network Fuse in 2013 when the station gave Freedia her own reality series. “Big Freedia: Queen of Bounce” will enter its sixth season in September.

In a 2016 interview with Fader, DJ & music producer Kaytranada revealed he was over being closeted. “I felt like there were two people inside me. I was trying to be somebody I was not, and I was frustrated that people didn’t know who I was,” the Haitian-Canadian artist told the publication.

The hip-hop community’s acceptance of gay rapper Young M.A marked an important moment within and outside of the music genre last fall.

While some of Young M.A’s lyrics about women are disappointingly problematic and may prevent her from becoming the poster child for lesbian feminism, her ability to dominate the hip-hop scene regardless of her sexual orientation was pretty monumental.

The only thing better than an artist being openly gay is listening to them croon about their same-sex attractions in their music. In “Ego Death,” the latest album by R&B band The Internet, the group’s lead singer Syd the Kid is literally singing her boo’s praises in “Girl.”

When 10-time Grammy nominated singer Meshell Ndegeocello was 18 years old, she sang about about taking another woman’s boyfriend. Now 48, the singer is settled down with a wife, two kids and is presumably staying away from other people’s relationships.

Although she’s proud of her bisexuality, in 2010, the raspy-voiced singer told Out magazine that being defined by her sexual orientation “limits [her] artistically.”

Chance The Rapper’s adorable little bro Taylor Bennett came out via social media in January when the rapper and actor took to Twitter to declare his bisexuality.

“I do recognize myself as a bisexual male & do & have always openly supported the gay community & will keep doing so in 2017. #ThankYou,” one of the rapper’s tweets read.

To the majority of the HBO viewing world, Felicia Pearson will forever be associated with her famous “The Wire,” character Snoop. But, as chronicled on VH1’s “Love and Hip-Hop: New York,” Pearson has also been trying her hand in the music business.

In addition to having her own record label, she also appears in Tony Yayo’s song “It’s A Stick Up.” Pearson’s tumultuous romantic relationship with former girlfriend J. Adrienne also served as an interesting storyline on the reality show.

Todrick Hall didn’t win the ninth season of American Idol where he was told by Simon Cowell that his singing career would never go beyond Broadway.

Hall did star in Broadway’s “Kinky Boots” beginning last November, but he wasn’t limited the stage as salty Simon predicted. Prior to the play, the queer multi-talented 32-year-old released a 16-song visual album “Straight Outta Oz” which has garnered over 1.1 million YouTube views and led to a nationwide tour.

Singer Kehlani, who has said she’s part black, is a bisexual free-spirit from Oakland, California. Her hit songs “Distraction” and “The Way” have attracted mainstream attention. But it’s one of her lesser-known songs that will leave you with the utmost respect for the singer.

In “First Position,” a bold Kehlani persuades a seemingly bi-curious woman to “stop messing with those boys and “get you a lady” and it’s utterly awe-inspiring.

It’s only a matter of time before more dope artists like these infiltrate the music scene. In the meantime, stay proud and claim your blackness and queerness deafeningly loud.

Correction: An earlier version of this article stated that Angel Haze is currently dating model Ireland Baldwin but the two are no longer romantically linked. 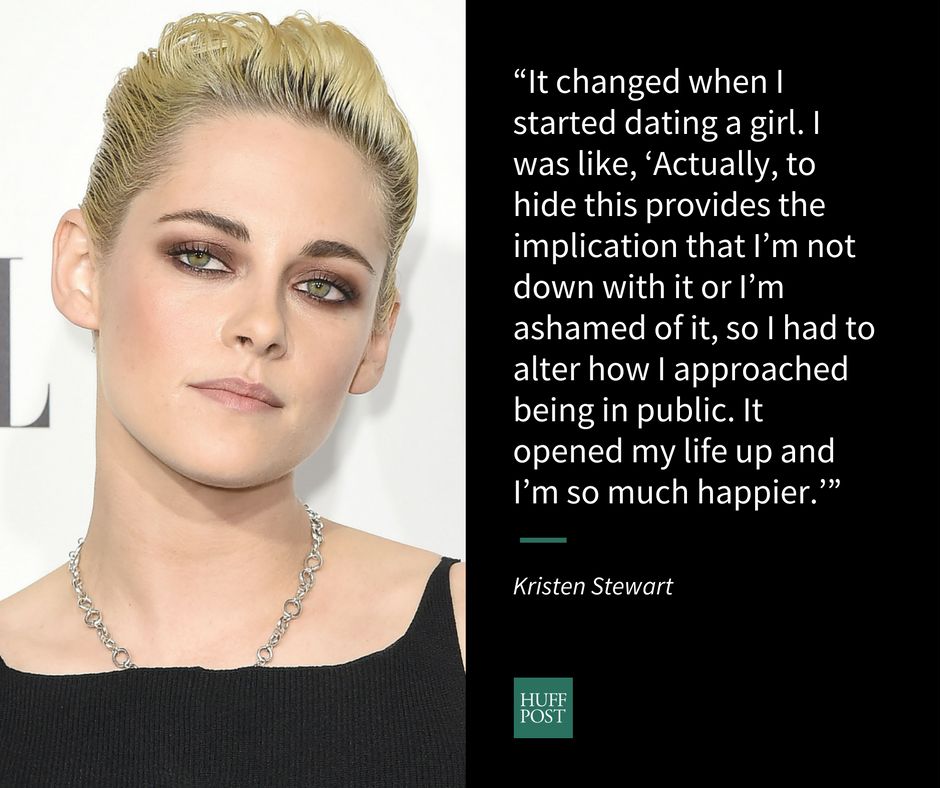 1 / 15
Kristen Stewart
<a href="https://www.huffpost.com/entry/kristen-stewart-addresses-rumors-about-her-sexuality-in-a-badass-way_n_5731ec03e4b0bc9cb047f65f">Stewart got vocal about her sexuality</a> in 2016. The actress said she is "so much happier" dating women in the public eye, years after having her heterosexual relationships scrutinized.&nbsp;<br><br>&ldquo;It <a href="https://www.huffpost.com/entry/kristen-stewart-dating-women-happier_n_5798d5aae4b01180b5311839">changed when I started dating a girl</a>,&rdquo; she told Elle UK. &ldquo;I was like, &lsquo;Actually, to hide this provides the implication that I&rsquo;m not down with it or I&rsquo;m ashamed of it, so I had to alter how I approached being in public. It opened my life up and I&rsquo;m so much happier.&rsquo;&rdquo;
Getty