My 3-year-old really fancies his pacifier. Insert your look of dismay here. Now insert my look of 'like I give a crap.'

Many parents debate when the pacifier love affair should end. My husband and I have taken a joint position on this one. Well-meaning friends have suggested the Pacifier Fairy pay us a visit, confiscate our robust collection and donate it to a made-up place I couldn't explain to my child with a straight face... Needless to say, the Fairy won't be dropping in anytime soon. Here are 15 reasons why: 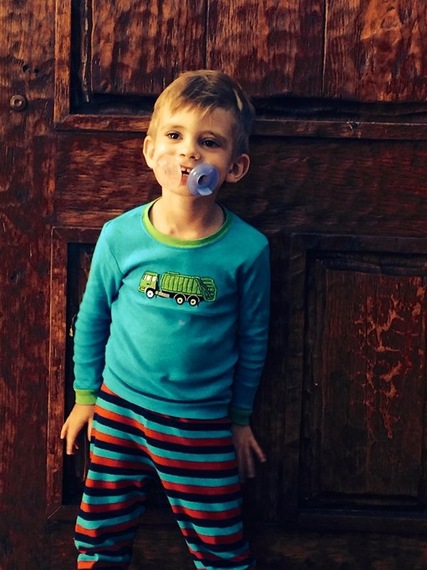 Sometimes two are better than one. This photo was taken just after his third birthday

Leyna Juliet Weber is a Mother/Writer/Actress in that particular order. She is the Co-Founder of WorkingBug.com and lives in Los Angeles with her husband and two small sons in a home that consistently looks vandalized. www.SeeMomWrite.com

More:
thumb suckingsleep deprivationAmazonParentspacifier
Newsletter Sign Up
Raise the kind of person you'd like to know
Subscribe to our parenting newsletter.
Successfully Subscribed!
Realness delivered to your inbox

Mother of 3/Writer/Actress (in that particular order)