In less than a couple weeks, the San Francisco Silent Film Festival will celebrate its anniversary.

For the last 15 years, a small group of Bay Area film enthusiasts have screened, promoted, and advocated for a defunct art form for which they are especially passionate. The dot.org that is the Silent Film Festival has grown from co-presenting one silent film in the course of an evening to now showing 12 feature films and as many short works over a four day period. This year, as many as 10,000 people are expected to attend the Festival. It's grown to become the largest silent film festival in North America.

In the past, the Festival has screened some truly great films and hosted some truly memorable moments. There was the epic Ben-Hur at the first Festival, and Wings -- the first film to win an Academy Award, was shown at the fourth annual event. And how could you have not been wowed by Rudolph Valentino, larger than life, dancing the tango in The Four Horseman of the Apocalypse at the ninth annual Festival?

The Festival has also screened Disney's earliest works, the Alice Comedies. These part live-action, part animated shorts from the mid-1920s starred Virginia Davis, who was then a little girl. In 2003, more than a few years older, Davis was in attendance at the Festival to talk about working with Walt.

In 2006, the 1929 Louise Brooks' film, Pandora's Box, was introduced by the experimental film maker Bruce Conner, who told of how he almost came to meet the legendary actress when he was a boy growing up in Wichita, Kansas -- Brooks' home town. Another year, Tony-Award winning actor Sydney Chaplin was on hand to introduce a film by his father, Charlie. And another year, Fay Wray introduced The Wedding March, which she made for Erich von Stroheim.

Over the course of the 14 earlier Festivals, Lon Chaney, Clara Bow, Buster Keaton, Harold Lloyd, Mary Pickford and Douglas Fairbanks have all shone brightly on the big screen -- as have rarely seen silent films from Brazil, Japan, India and elsewhere. This year, they're showing the 1930 Chinese film, A Spray of Plum Blossoms, which is based on Shakespeare's Two Gentlemen of Verona.

If anything, the Silent Film Festival is an eclectic affair. If you missed Ghost World director Terry Zwigoff introduce one of his favorite W.C. Fields films, or contemporary Canadian director Guy Maddin (who's made his own silent movies) translate the inter-titles to a bizarre silent French film -- well then, you've missed a once in a lifetime experience.

In honor of the 15th annual event, here are 15 reasons to attend this year's Festival.

1) METROPOLIS: When Fritz Lang's masterpiece debuted in Berlin in 1927, the sci-fi epic ran nearly 153 minutes. In order to maximize box office potential, distributors cut the film to 90 minutes. For decades crucial scenes were considered lost. Until now! In 2008, archivists from the Museo del Cine in Buenos Aires made a spectacular discovery - a copy of the film considerably longer than any existing print. That discovery led to the restoration -- 25 minutes longer, which debuted in Berlin earlier this year. At the SFSFF, Paula Félix-Didier and Fernando Peña, the two archivists who found the lost footage will talk about their headline making find.

2) HAXAN: This is likely one of the most unusual films - silent or otherwise - you'll ever see. Benjamin Christensen's 1922 film (in English titled Witchcraft Through The Ages) uses a series of dramatic vignettes to explore the idea that witches in the Middle Ages suffered the same hysteria as turn-of-the-20th century psychiatric patients. The film itself, however, is far from overly serious -- instead, it's a witches' brew (pardon the pun) of the scary and darkly humorous. 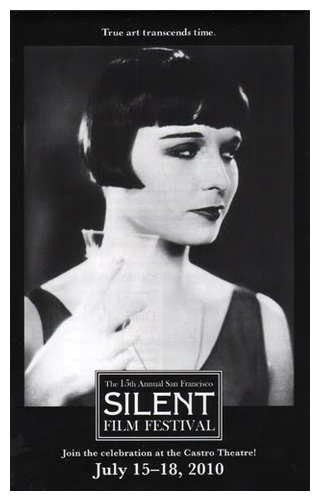 3) LOUISE BROOKS: Diary of a Lost Girl marks the second collaboration between the Austrian-born director G.W. Pabst and the American-born actress whose reputation today looms larger than ever before. Their first film was Pandora's Box, also from 1929. According to film historian Kevin Brownlow, this collaboration helped establish Brooks as an "actress of brilliance, a luminescent personality and a beauty unparalleled in screen history."

4) KEVIN BROWNLOW: Film maker, film historian, author, archivist, documentarian, champion of the silent cinema - Brownlow's importance in film history cannot be overestimated. His 1968 book, The Parade's Gone By, helped shape a generation of film scholars and enthusiasts. His 1979 TV series, Hollywood, which aired on the BBC and PBS, set the standard. For this year's Festival, Brownlow has selected The Woman Disputed (1928), with Norma Talmadge. The world renowned British film historian will also be presented with the 2010 Silent Film Festival Award. (Hey Academy, isn't it time he's also given a special Oscar?)

5) BABY PEGGY: In the early 1920's, the now 91 year old Diana Serra Cary was known as "Baby Peggy." She was one of the two biggest child stars of her time, and today, is one of the last surviving silent film stars. Cary will be at the Festival to sign copies of her books.

6) THE CHILDREN: With the passage of time, the children of some of the key personalities of the silent era are as close as we may come to learning more about their work. The children of multi-Academy Award winning director William Wyler will be interviewed on-stage by Leonard Maltin before the screening of Wyler's drama, The Shakedown (1929). Also in attendance will be William Wellman Jr., the son of the Academy Award winning director, and the author of The Man and His Wings: William A. Wellman and the Making of the First Best Picture. Also signing books is Robert Dix, the son of 1920's and 1930's leading man Richard Dix.

7) COMEDY: You can't afford to miss "The Big Business of Short, Funny Films." Academy Award winning director Pete Docter (UP, Monsters Inc., etc...) presents a selection of hilarious short films - some of the funniest moments in cinema - and all in 35mm. Later in the day, the Festival will screen the endearing early Frank Capra comedy, The Strong Man (1926), starring Harry Langdon. His was one of the most beautiful faces in all of film.

8) MUSIC: Every film, from the shortest short to the longest epic, is presented with live musical accompaniment. This year the acclaimed Alloy Orchestra and Mont Alto Motion Picture Orchestra will perform, as will musicians Dennis James, Donald Sosin, and Stephen Horne. And making their West Coast Premiere is the Matti Bye Ensemble, winners of the Golden Beetle (Sweden's Oscar). The Festival is also putting on a special one-hour program with participating musicians called "Variations on a Theme: Musicians on the Craft of Composing and Performing for Silent Film."

9) FREE PROGRAMS: Every year of late, the Festival has sponsored a free and open to the public program on film preservation. It's not as dry as it sounds. Actually, it's pretty interesting. The first will take place on Friday morning (July 16) and the second on Sunday morning (July 18). Rare, fragile, and once thought lost films are screened, and individuals working in the field speak about preserving our cultural heritage. Annette Melville of the National Film Preservation Foundation will also speak. She was involved in the recent repatriation of the huge cache of silent films recently uncovered in New Zealand.

10) GEORGES MELIES: If you ever took a film class, chances are you saw Melies' delightful A Trip to the Moon, from 1902. Prior to every screening throughout the Festival, a Melies short will be shown.

11) THE FLYING ACE: Richard E. Norman was among the first to produce films starring African-Americans. Between 1920 and 1928, the Norman Film Manufacturing Co. produced six feature-length films in the hopes of establishing an independent black cinema at a time when blacks were largely demeaned in mainstream movies. The Flying Ace (1926) is the only Norman film that survives - its story of a crime-fighting ace pilot is a crowd-pleaser!

12) FOREIGN FLICKS: Along with Haxan (a Danish / Swedish production) and the 1924 French comedy, L'heureuse mort, the Festival will also screen the 1929 avant-garde Soviet production Man with a Movie Camera, the semi-expressionistic 1929 Italian masterpiece Rotaie, and the 1931 Chinese production, A Spray of Plum Blossoms.

13) AUTHORS: Some 20 authors, including film historians and biographers, will be signing their books. Not to be missed are Ira Resnick, Starstruck: Vintage Movie Posters from Classic Hollywood (Abbeville), Anthony Slide, Inside the Hollywood Fan Magazine (Univ. of Mississippi Press), David W. Menefee, George O'Brien: A Man's Man In Hollywood (BearManor), and Donna Hill, Rudolph Valentino, The Silent Idol: His Life in Photographs (Blurb). Also signing are Brownlow, Maltin, Docter, etc....

14) CASTRO THEATER: The Silent Film Festival takes place in the historic Castro Theater. Built in 1922, this grand neighborhood theater is one of the last standing movie palaces in the San Francisco Bay Area. Early on, Janet Gaynor used to be an usherette there.

15) IT'S THEIR BIRTHDAY: Today, the Festival is ably helmed by Stacey Wisnia and Anita Monga. At the upcoming event, founders Melissa Chittick and Stephen Salmons will be honored, and a festive atmosphere will prevail at this special anniversary event, kicking off with the opening night film, The Iron Horse (1924), directed by John Ford and starring San Francisco born hunk George O'Brien.

The San Francisco Silent Film Festival takes place July 15 through 18 at the Castro Theater in San Francisco. More info, including a compete program of films and special guests, can be found at www.silentfilm.org

Thomas Gladysz is an arts journalist and author. Recently, he wrote the introduction to the new edition of Margarete Bohme's classic novel, The Diary of a Lost Girl, which he'll be signing at the Silent Film Festival. Gladysz loves reading and writing and old movies. More at www.thomasgladysz.com.