Writing from the UN Climate Talks in Paris. 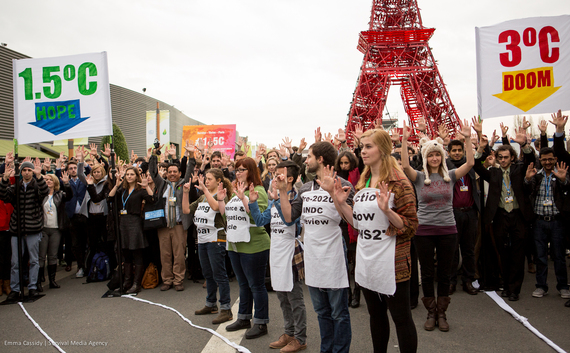 6 years ago when the Copenhagen climate talks fell over, there was one outcome that many pointed to as a success. That is: governments had finally agreed on a target to limit global warming to: "below 2 degrees Celsius".

This recognized the science that anything beyond 2 degrees would open the door to runaway climate change. I.e. unstoppable warming as natural feedback loops kick in. Leaders committed to defend against this with the crucial 2degree guardrail, if little else.

In Paris, it looks like governments are on track to revise that goal down to 1.5, in some form at least.

A lot has changed since 2009: Investment in Renewables now exceeds that of fossil fuels and there has been a dramatic reduction in the cost of clean energy. Solar for example is around 80% cheaper now.

Unfortunately, climate Impacts are also being felt more intensely than ever. Almost every day there is another example that the warmer world we are living in is already costing lives From hurricanes and heat waves to crop failure, the warming of just under 1 degree we've already had has already put vulnerable people in extreme danger.

But thankfully, political will on climate change is also shifting, if painfully slowly.

We've seen this in the build up to Paris throughout the year. The G7 committed to phase out fossil fuels. China and the US continued their climate cooperation. All theee major political parties in the UK signed a joint climate pledge to cut emissions, the type of cooperation us in Australia and the US are desperately waiting for.

But don't be mistaken, our political leaders didn't just have a moral awakening one morning. They've been driven to action by the powerful movement for climate justice, from all corners of society. 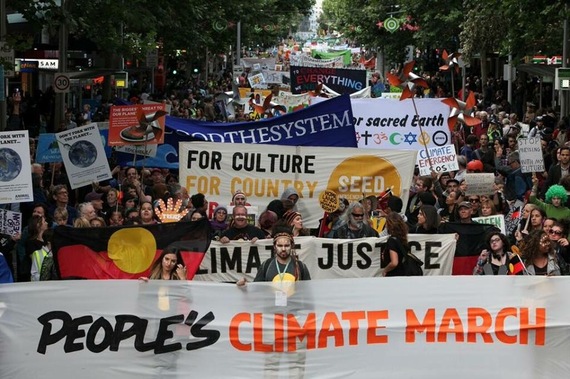 From the Fossil Fuel divestment movement, to the Pope's moral call to action, to the People's Climate March, our movement is stronger and more diverse than ever.

All this has built up to allow political leaders to raise ambition at these talks. This has been exemplified through one number: 1.5.

The speed of this momentum has taken even the most seasoned observers by surprise. A number of negotiators here have remarked, "this [1.5] wasn't even on the agenda a year ago".

They've credited it in part to the "remarkable" diplomatic push from the Climate Vulnerable Forum. A negotiating group of nations who are already the impacted the most by climate change, including: Tuvalu, Nepal, and the Philippines among others.

The science on 1.5 has come a long way too. Every week, more evidence is released that the world we are in today is a dangerous climate, and heading anywhere near 2 degrees of warming would be nothing but reckless and immoral.

Over the last three years, a Special Expert Dialogue was established within the UN Climate process to review the 2 degree target. The bottom line of the 182 page report is this: 2 degrees is "an upper limit, a defense line that needs to be stringently defended", It is not an ideal target for a safe and fair world.

2 degrees should not be an option.

Warming of just 1.5 degrees would double the increase in heat we've already experienced, placing millions of lives in unacceptable and unjust danger. It's hardly ideal but it's the most ambitious limit that's still available to us.

There have been calls for a target of 1.5 for years. This year it's not only a possibility, but it's looking like the likely outcome.

Article 2 or the 'Purpose' of the latest version of the Draft Paris Agreement released late yesterday has three options, being: To hold the increase in global temperatures to; Below 2°; Well below 2° [But ideally 1.5 ]; and below 1.5°.

In a plenary of the Comité de Paris late last night, vulnerable countries were steadfast in their resolve for 1.5. As one might expect, Survival is a Red line in these negotiations.

Although, even if a 1.5 target is adopted, like the entire Paris conference, it will be only the end of the beginning.

Current targets from nations have us on track to a 3 degree+ world; there is a clear gap in rhetoric and reality. What happens after Paris is a chance to bridge that gap.