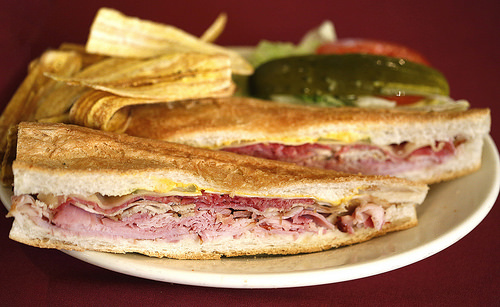 The Cuban sandwich at The Columbia in Tampa
Credit: Lara Cerri/VISIT FLORIDA

Order a Cuban sandwich at the Columbia Restaurant - As the debate roars on over which Florida city is the true birthplace of the Cuban sandwich (Miami or Tampa?), a consensus has been reached over what makes a real Tampa Cuban: ham, pork, salami, Swiss cheese, pickles and mustard on high quality, fresh Cuban bread. Then hot press it until toasty and juicy. Eat it with a Cuban coffee at the Columbia, touted as Florida's oldest restaurant, with Ybor City roots dating back to 1905. 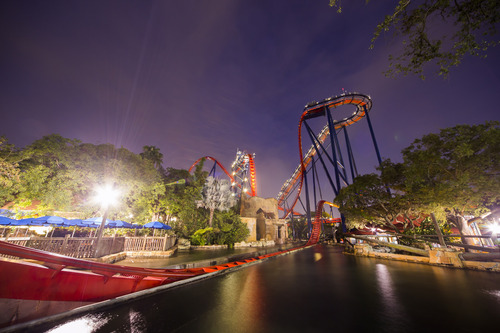 Ride SheiKra at Busch Gardens - Three minutes. Seventy miles per hour. A 200-foot drop. If you can stomach dizzying heights, exhilarating twists and turns and a few hard plunges, ShieKra will not disappoint even the most jaded of thrill ride connoisseurs. North America's first "dive coaster" once held world records in speed and length (faster and longer dive coasters have since been built), and it's still considered one of the top coasters in the U.S. The line to get on is usually the longest at the park, but it's worth it, and the pause at the top gives you the best view in town. Just make sure to keep your eyes open. 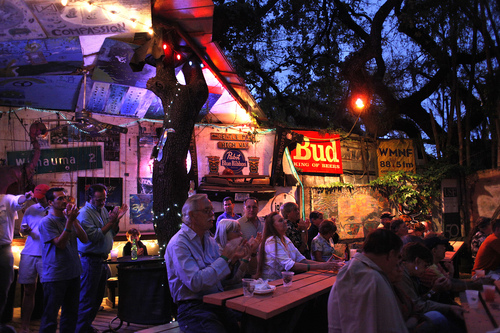 Catch a band at Skipper's Smokehouse - Off the beaten path and tucked away from most of the city's nightlife action, Skipper's has been attracting the best blues, rock, reggae, bluegrass and folk music acts since 1980. Throw back a Red Stripe and catch a Grateful Dead cover band, or just enjoy the "cracker-style" wooden plank décor and order some fried gator tail and Key lime pie. This is a family-friendly place with a great vibe, which has earned it a reputation as one of the best concert venues in Florida. 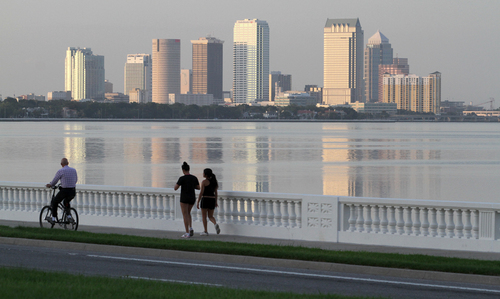 Go for a jog along Bayshore Boulevard - This 4.5-mile sidewalk and road provides the best view of the sparkling Hillsborough Bay while flanked on the other side by multi-million-dollar, historic south Tampa homes. It's a popular spot for runners, skaters, cyclists, strollers, dog-walkers and anyone else looking for some fresh air, and its iconic decorative concrete balustrade is one of the most recognizable architectural features in Tampa. It's hard not to whip out your phone and take a photo of the elegant sunrises that happen here.

See a movie at Tampa Theatre - As one of the most beloved and gorgeous landmarks in Tampa, the carefully preserved "TAMPA" sign and old-time marquis out front reels you in, but it's the inside that takes your breath away. Sit and be entertained by the Mighty Wurlitzer organ pipes while you gaze around at the flamboyantly decorate interior of statues, flowers, stars, gargoyles and other touches that seem to draw from every architectural period in history. The theatre opened with a silent movie in 1926 and was named to the National Register of Historic Places in the '70s. 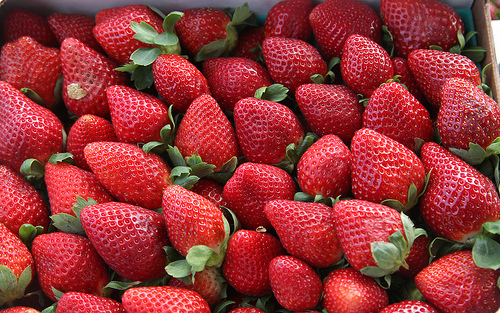 Stop for a strawberry milkshake (or strawberry anything) in Plant City - Known as the "winter strawberry capital of the world," more than three-quarters of the nation's midwinter strawberries come from Plant City. Sweet and delicious, the berries make their way into everything from cobblers to muffins to martinis, but one of the more popular ways to consume them is via milkshake. Jump off Interstate 4 to stretch your legs and grab a shake from the Parkesdale Farms Market, or pick your own berries during u-pick season, which usually begins in April.

Go shopping in Hyde Park Village - For how lovely Tampa's weather is for most of the year, it's surprising how few outdoor shopping spots there are. Hyde Park is a must-visit for those who like to browse popular retail chains such as West Elm, Anthropologie and Sur La Table, but don't want to feel overwhelmed by a mall. The small, few-block district also has a chocolate shop, elegant but not overly expensive restaurants and bars, a dog boutique and other unique shops that make for a nice girls' day out or a fun stroll with the family. 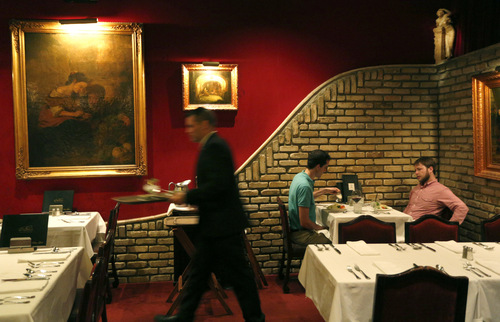 Get dessert at Bern's Steak House - Although best known for aged steaks and extensive wine list, locals know a great treat is to swing by for a visit to the Harry Waugh Dessert Room, made up of many little intimate rooms for parties to enjoy a unique end to dinner. Like everything else at Bern's, the dessert list is lengthy and over the top, offering Baked Alaska, all variations of chocolate pies, cakes and mousses, ice creams and sorbets, as well as dessert wines and coffee with spirits. Guests are encouraged to take their time, and even get to choose their own music via private speakers and a push-button selection of tunes. 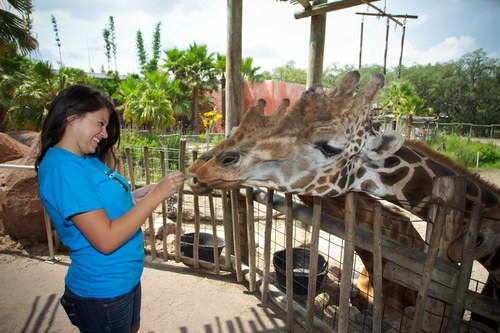 Feed a giraffe at Lowry Park Zoo -Every weekend at 1 p.m., folks have the opportunity to stand eye-to-eye with the long-necked gentle beasts and feed them lettuce from a "feeding plateau." It's perhaps the most exotic of the zoo's interactive animal exhibits, but if you're not into getting that close to animals' teeth, Lowry Park gets you up close and personal (behind glass) with manatees, tigers and other wild creatures. The zoo has a surprisingly vast and varied array of animals for its small-ish size. 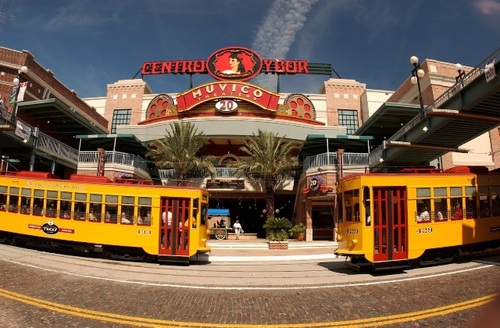 Ride the trolley in Ybor City - Streetcars were an important part of Ybor history, transporting cigar factory workers to and from their workplace and outlying neighborhoods. The cars came to a halt in the 1940s following World War II, but were revived in 2002 to bring nostalgic color and life back to the historic district. It's a fun way to get from Ybor to downtown, Channelside and Harbour Island, and whole day passes are only $5.

Try your luck at Seminole Hard Rock Hotel & Casino - After Indian remains were found during some construction downtown, the remains were moved to a nearby location off Interstate 4 and the spot was granted Seminole Tribe reservation status. Today, the largest casino in Florida sits on the property, where visitors can play Vegas-style slots, poker and blackjack. Retirees come in busses and bachelor and bachelorette parties come in droves, but it's also a cool place to visit if you're into rock n' roll memorabilia and live music. 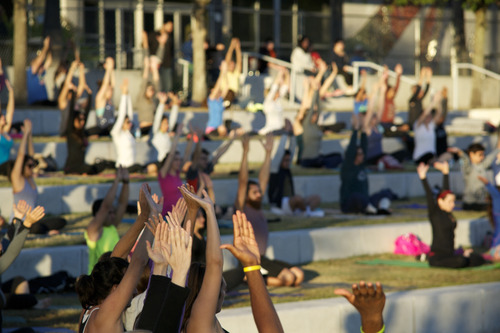 Have a picnic at Curtis Hixon Waterfront Park - One of downtown Tampa's biggest criticisms is how the layout of the buildings obstruct the view of the river. Not so at Curtis Hixon, which provides a beautiful view of the water and University of Tampa minarets during the day and an even more beautiful sight at night. Pick up some Publix subs, lay a blanket down in the grass and relax. The fountain splash park makes it a favorite for families, and there are often concerts and "Rock the Park" events at night that make it a lovely stop for couples as well. 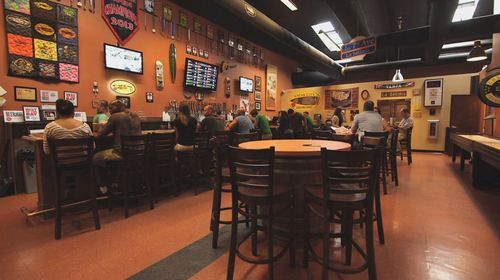 Sample the beer at Cigar City Brewing - The Tampa Bay area's craft beer and microbrew scene has quickly grown, but few are able to replicate the tasty and popular varieties at Cigar City. For $5, you can get a tour at the Spruce Street brewery and restaurant and sample the Florida Crack Wit, the Northdale Pale Ale and the ever-popular Jai Alai IPA, which is so sought after, the brewery has a hard time keeping up with demand. If you can't make it to the main location, you might be lucky enough to be stuck in Tampa International Airport's C Terminal (Southwest Airlines' hub), where you can buy a six-pack of Jai Alai to go. 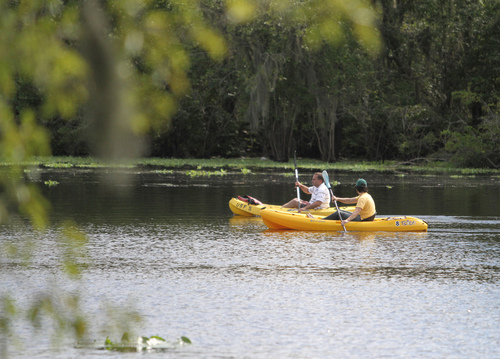 Paddle the Hillsborough River - For a river that connects to such an urban area, the Hillsborough River is rife with totally unfazed wildlife as you paddle through the quieter, more serene outlying spots. Check out the bored and lazy-looking alligators, who will all but ignore you even if you accidentally skim across their snouts. Turtles, ibis, deer, hawks, hogs - all have been spotted in the wooded areas lining the designated paddling trail. The river attracts both beginning and advanced paddlers alike, as the river stretches all the way up to Crystal Springs in Pasco County. Just be sure to research which trail or area of the river suits your experience level, as there can be swampy portions that could leave you lost and confused. 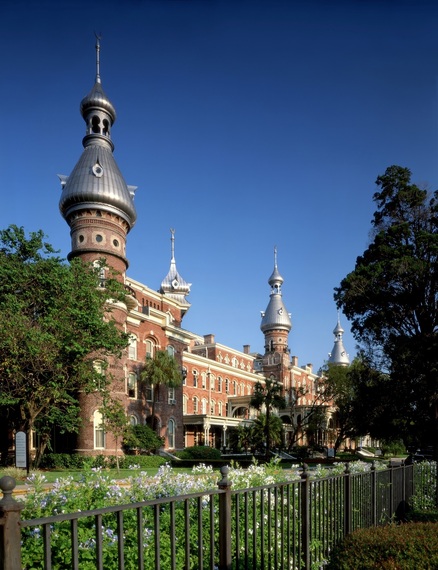 Travel through time at the Henry B. Plant Museum - Were it not for Henry B. Plant's visionary railway system in the late 1800s, Tampa would not have attracted the cigar factories and other industries that helped grow little port town into a bustling metropolis. Plant was also able to attract tourists and dignitaries to the Tampa Bay Hotel, a luxurious and opulent 511-room building that was tastefully decorated with fine furnishings, European statues, Venetian-style mirrors and other grandeurs. The hotel is now the University of Tampa's Plant Hall, where the Henry B. Plant Museum is housed. The museum restored several of the rooms to replicate its glory days and honor its use during the Spanish-American War. The best time to visit is around the holidays, when the museum hosts its gorgeous Victorian Christmas Stroll.

Did we miss something on our list? Let us know in the comments below.