Despite the many forces trying to keep crowds away (fire at Miami airport, delays into Ft. Lauderdale Airport, traffic all over Miami, overbooked cab companies) over 150,000 enthusiastic fans made their way to Bicentennial Park on Friday for the 13th annual Ultra Music Festival. It was hot, it was packed and the schedule was chaotic, yet fans banded together for one simple reason: to dance the days away to one of the best electronic music lineups ever put together.

What once started as a small party on the beach in 1999 is now the world's biggest dance music festival, encompassing three days, eight stages and more than 200 musicians, evidence that the electronic dance music craze has exploded into a full blown pop-culture revolution here in the United States.

The sold out show -- 150,000 tickets sold -- rivals last year's Coachella Music Festival in numbers, which features a variety of music for all different tastes. But the singular focus of electronic music is found nowhere else as great as Ultra, where acts like Tiesto, Kaskade, David Guetta and Moby are revered like big name celebrities. According to the Wall Street Journal, last year Tiesto, who has yet to have a radio hit or best selling album, made over $20 million; he has 376,707 followers on twitter, and is easily recognized in person. It is no doubt that Tiesto is just one example of the new, and much more socially inclined, "rock stars" taking over the hearts and minds of a younger generation.

And there were some real rock stars present. Duran Duran performed on Friday night, yet more ravers were crowded around the Loco Dice performance. Similarly, P. Diddy collaborated with Erick Morillo and Flo.rida and Will.i.am joined David Guetta on stage, but ATB and MSTRKRFT pulled in large numbers of fans on the other stages. Though the disco revivalists and hip-hop artists present may add some cache to the otherwise strictly electronic fest, traditional pop music PR just doesn't cut it with this passionate crowd. The come for the dubstep, they come for the house, they come for the electronica... and that is exactly what they get.

Like last year, Carl Cox & Friends had a dedicated tent with two VIP sections, a second story platform and Cirque de Soleil-esque lighting and design effects. The tent was one of the most aerodynamic, brilliantly built stages ever resurrected at a festival. Fans exclaimed at how comfortable it was (full-flooring), how much space there was to move (despite being packed throughout the entire 3 days) and how much they appreciated the thought that went into the architecture of the stage. On Sunday, Armin Van Buuren took over for the 500th episode of A State of Trance and broadcasted the smoke covered show all over European radio stations.

Ultra Music Festival is not for the faint of feet. It's an intense three days, one that can borderline on dangerous. The crowd is very young, drug use is clearly apparent and injuries and heat exhaustion are numerous. But at the heart of it, Ultra is a time to come together with friends and simply dance. Afrojack, Aoki, Deadmau5 -- their music captures the zeitgeist of a new generation: a generation who, in the last few years, have faced an increasingly rigorous and diminished job market, a prevalent war culture and financial instability. And how do they react? They tweet, they 'like' and then they dance. They just dance.

For all things travel, music, and more check out Jetsetfarryn 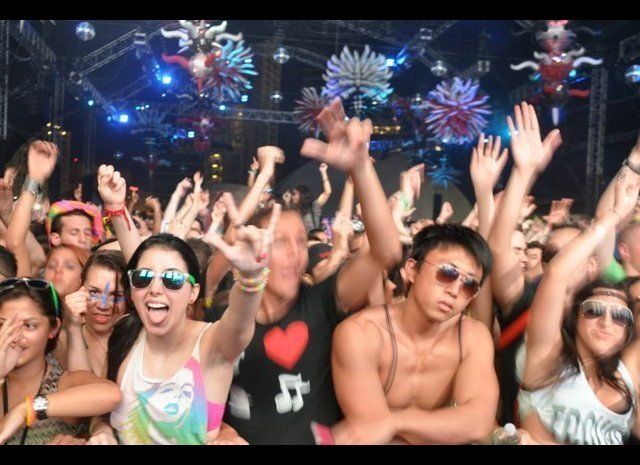