There must be something in the water in California.

When Sosefina Tagalu of Daly City, Calif. delivered Sammisano Joshua Talai Otuhiva in August 2013, she had no idea he might be the biggest baby ever born in the state.

"Everyone was guessing before we weighed him," said Tagalu to The Huffington Post. "The nurses were guessing 10 or 11 pounds and the doctor guessed 14."

The result when they put him on the scale: a whopping 16 pounds, 1.7 ounces.

The family didn't realize the birth may have been record-breaking until another California baby, Andrew Jacob Cervantez, made headlines when he was born in January at 15 pounds, 2 ounces -- almost a full pound lighter than baby Sammisano. Newspapers hailed Cervantez as "the largest baby ever born in California." 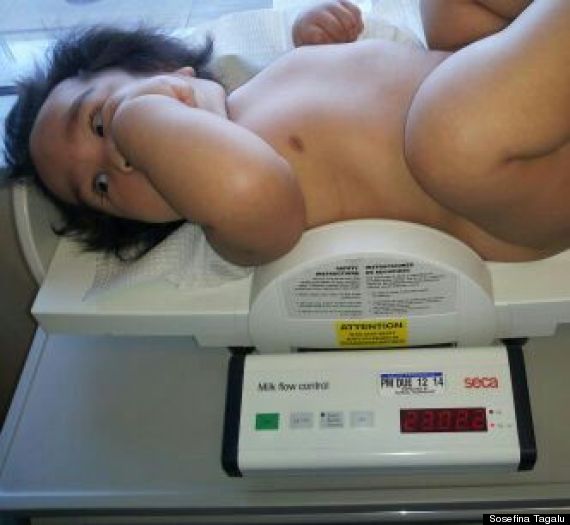 "My friends and family told me I needed to set the record straight," said Tagalu to the San Francisco Chronicle. (Check out photos of Sammisano at SFGate.com.)

Sammisano isn't the first large baby in his family either. Though his sister was a typical 8 pounds and 9 ounces at birth, his brothers were 12 pounds, 4 ounces and 11 pounds, 1 ounce. Incredibly, Sammisano even arrived early.

"The doctor said he might have weighed 18 pounds if he had arrived on the due date," Tagulu told HuffPost.

While the possible title is exciting, Sammisano's size comes with its challenges. At just 5 months, he now weighs 25 pounds and none of the clothes or diapers from his baby shower have ever fit him.

"Not a single one," said Tagulu. "Not the three months, not the six months -- I had to start him in 12 months clothing the day he was born. I had to return to work three weeks early to cover the extra cost of food and diapers."

"I feed him a bowl of [infant rice] cereal and when it's finished he looks at me like, 'Mom, where's the rest?'" she said. Tagulu waits 45 minutes before feeding him again, but he's almost always hungry. "He's a handful," she said, laughing.

While the title of biggest baby is hard to prove -- as the San Francisco Chronicle noted, birth weights are not tracked by state officials and medical records are protected by privacy laws -- Tagulu is excited about the possibility.

"He truly is amazing," she told HuffPost. "Just amazing."