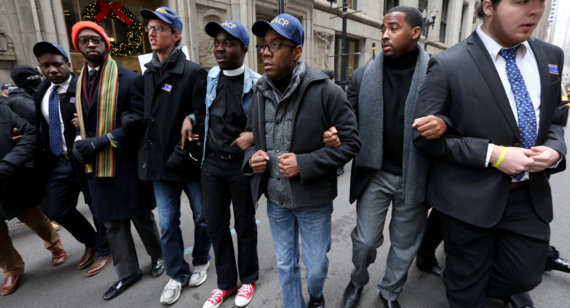 While the media was saturated with news of Donald Trump pandering to dozens of African American pastors, young seminarians were living out our faith on the streets of Chicago. Armed with the power of our convictions and the prophetic tradition of the Black Freedom Struggle, nine seminarians, attending the University of Chicago Divinity School and McCormick Theological Seminary, and Cornell William Brooks, the national President of the NAACP, blocked traffic outside of City Hall in downtown Chicago. As a result of this demonstration, the ministers were arrested by the Chicago Police Department and released with citations later in the afternoon. Those arrested were the Rev. William Hall (Clergy), the Rev. Tyrone McGowan (Clergy), the Rev. LaShondra Stephens (MTS), Min. Jonathon Cahill (U of C), Min. Marshall Hatch Jr. (U of C), the Rev. Lawrence Green (U of C), Min. Quinn Rosenthal (U of C), Min. Devon Jerome Crawford (U of C), the Rev. Stephen A. Green (U of C/NAACP Youth and College Director), and the Rev. Cornell William Brooks (NAACP National President).

Our message was clear: The city will not conduct business as usual as long as criminals occupy the highest positions of power. We called for the resignations of State Attorney Anita Alvarez, Mayor Rahm Emanuel, and Superintendent Garry McCarthy. All of them are implicated in covering-up the shooting death of Laquan McDonald, who was executed on October 20, 2014 by officer Jason Van Dyke. For four hundred days, no elected official in Chicago called for the arrest of Van Dyke or the public release of the video showing sixteen bullets pumped into Laquan's body. This case is sickening, but not uncommon. Earlier this year, the department of Justice released the Ferguson Report, a comprehensive investigation of the Ferguson Police Department and the policing patterns that disproportionately affect communities of color. Since the release of the report, police precincts across the country have been scrutinized for their unduly harsh penalties and brutality, garnering significance in the killings of Sandra Bland, Kindra Chapman, and Sam DuBose. Chicago is no exception. With a history of political corruption, extrajudicial torture, and redlining, Chicago leads the country in the need for comprehensive police and government reform.

For many reasons, it was important for seminarians, folks who have answered the call to serve the church with head and heart, to participate in the protests and give our bodies as a sacrifice for the movement. It is important to show that being an activist, an academic, and a minister is not a contradiction. Too many religious leaders have been co-opted by consumerist impulses and have lowered their voices to raise their budgets. The demographic of religious nones continues to increase because of pastors who are not sensitive to the times and the violence that affects Black, queer, trans, and poor people. And many of these criticisms are credible. The juvenilization of Christianity has reduced the church to a space of religious ecstasy that privileges personal piety over prophetic witness and charity over justice work. Instead of becoming the Word made flesh, ministers have exploited their gifts for the purpose of having "good church," without using their platforms to address structural violence and inequality that their parishioners experience daily. This is why 100 African American pastors can meet Donald Trump without addressing the racist, ableist, and nationalist violence he engendered with his campaign rhetoric. The core of our work as ministers must be love and liberation for God's people. If we do not embody the ethic of love and liberation, then we are not practicing the religion of Jesus. 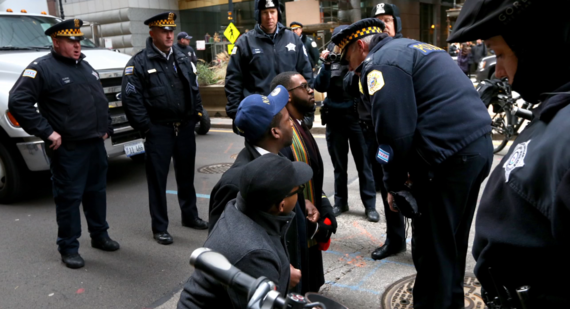 Now is the time for millennial ministers to reclaim the prophetic call of Christ. Jesus' ministry did not privilege the concerns of politicians with deep pockets and wide influence. But he spoke truth to power and flipped tables when a house of prayer was transformed into a den of thieves. We are called to do the same work. The Spirit is moving us from pulpits and pews to street protests and die-ins. In a world where teenagers are gunned down like animals, we need radical catalysts for justice. We follow the example of Jesus, a poor, Palestinian Jew with the power to change the world. Jesus did not come to be worshipped; he came to be followed. Following Jesus means stepping out of the conventions of religion and radically addressing the violence that plagues our communities. Violence takes the form of government neglect, police brutality, educational disparity and housing segregation. Much of the inter-communal conflict on the South and West sides of Chicago are symptomatic of neglectful leadership that does not care to provide restorative justice and resources that would improve the lives of its people.

As young ministers, we stand in solidarity with thousands of protestors to hold the city accountable for its transgressions. Even if we must be arrested, we will force the leadership of Chicago to confront the crises it has created. We will be the "creative extremists" who will force the city to reconcile its beautiful aesthetic with its oppressive truth. Not only for Laquan. But also for the named and unnamed victims of violence that our city has ignored. As the universe would have it, the day after our arrest was the 60th anniversary of Rosa Parks' historic moment of civil disobedience. Her resolve as a conscientious objector, having the capacity to break the law and respect the law simultaneously, resonates in our lives. We who believe in truth, we who believe in justice, and we who believe in freedom will not rest until it comes.