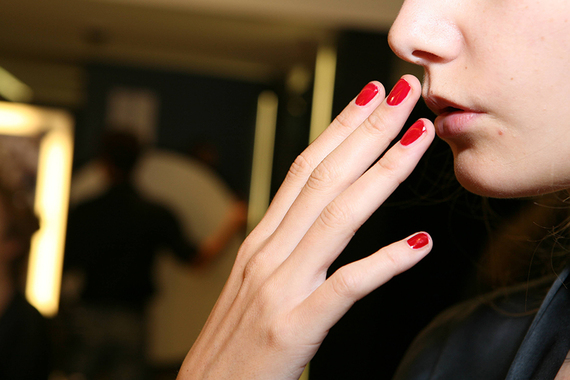 There's nothing worse than spending an hour on your nails only to have them chip or smudge minutes later. These easy tricks will help you fix all the sneaky saboteurs that are messing with your mani game.

Nail Mistake #1: Not Washing Your Hands Before Applying Polish

Ever notice how nail technicians put polish remover on your nails before painting them, even if you didn't have polish on them in the first place? That's because your nails have natural oils (usually transferred from your finger tips), which can prevent polish from adhering correctly. A quick fix? Follow suit and swipe your nails with polish remover before breaking out your base coat. Then wash your hands with soap and water to get rid of any remaining film or oil, says Butter London global color ambassador Katie Jane Hughes.

If you're treating your nail file like a saw, you're making your nails more susceptible to peeling and breakage. Not good. Here's the right way to even out your shape. "Gently run the file across the nail in one direction, beginning at the outside edge and pulling toward the center," says celebrity manicurist Deborah Lippmann. If your nails are already on the thinner side, Lippmann recommends holding the file flush to your nail, and tilting it so you file from slightly underneath. "This allows you to see exactly what you're doing and helps protect against over-filing," she says.

"If you don't buff, the natural oils in your nails can build up, leaving manicure-ruining residue on them," says Rita Remark, Essie global lead educator. "Buffing your nails is kind of like brushing your teeth--it's brightening, it makes nails look more youthful, and it gets rid of ridges." Her tool of choice? A standard sponge buffing block--it's soft, smooth, and not too abrasive. "I also love using them on the sides of my fingers when they start to get dry and peel," she says. Noted.

Nail Mistake #4: Not Exfoliating Your Cuticles

Contrary to popular belief, cuticle oils and cuticle removers are not one and the same--nor can they be used interchangeably. Oils help moisturize, while removers act like an exfoliating treatment for your nail beds. "Imagine using moisturizer to try to exfoliate your face," says Lippmann. "It's just not going to take off the dead skin." Start by massaging a cuticle treatment like Deborah Lippmann Cuticle Remover ($20, sephora.com) into your cuticles, and gently push them back with an orange wood stick. "Not only does this help get the cuticle off the nail plate, but it also helps get rid of dead skin cells safely and effectively," Lippmann says. Apply a cuticle oil after to add hydration.

Nail Mistake #5: Skipping a Base Coat

You're probably thinking, Duh! I know this. But it's the biggest mistake pros say they see, so consider this your friendly reminder. "If you want happy, healthy, and even the possibility of longer nails, it's important to begin every manicure with a high-quality nourishing base coat," says Caption Polish cofounder Greg Salo. "Not only does it protect your nails from stains, it also fills ridges and strengthens nails too." A bonus of all that: It'll lead to a smoother polish application, meaning your manicure is less likely to chip. We love the Caption Polish Base Coat ($12, dermstore.com).

Nail Mistake #6: Not Using a Special Base Coat for Glitter Polish

While we're on the topic of base coats, did you know there are now peel-off ones that work wonders for removing tough-to-get-off textures like glitter? They're particularly game-changing if you want a little sparkle on the weekends, but can't show up to the office on Monday with your nails looking like a Kesha concert. Our favorite? Sally Hansen Big Peel Off Base Coat ($5.99, ulta.com). 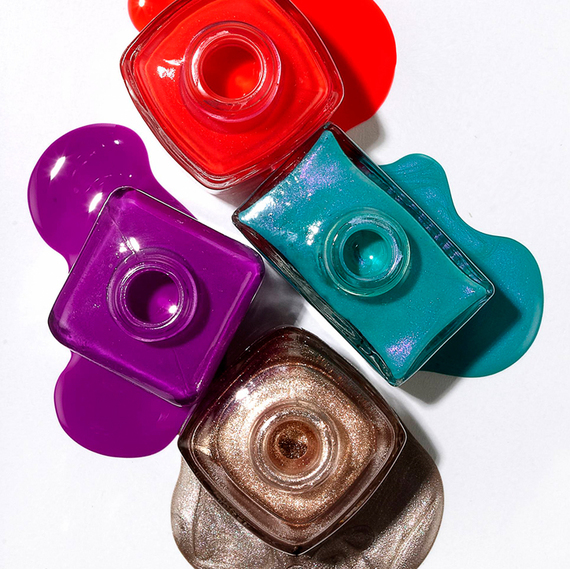 Nail Mistake #7: Using Too Much Polish

A big blob of polish takes forever to dry, and you'll be left with a bumpy finish. "Many of us overload the brush and do too many strokes," says Nails Inc. founder Thea Green. "The key is to load just enough polish on the brush to cover the nail in one coat." Her fail-proof technique? Stripe the nail three times: once down the middle, once on each side, and then repeat until you get your desired opacity.

If you're not waiting at least one or two minutes before applying another coat of color or a topcoat, you're not giving the solvents in your polish enough time to evaporate (which, ultimately, is what dries your nails). Celebrity manicurist Gina Edwards describes it this way: "You know how there's a difference when you cook something in the microwave versus when you cook it in the oven? It holds the flavor in more when you take the time to use the oven. The same can be said for your nails. The longer you wait between coats, the more it'll keep your color locked in." Use your iPhone timer if you really need help slowing yourself down.

This one is simple: "There are times when we're in a rush, and we cheat, but if you don't use a topcoat, your polish won't last as long," says Green. We're fans of Nails Inc. 45-Second Top Coat With Kensington Caviar ($15, sephora.com) for its sleek, shiny finish and quick-dry formula.

Nail Mistake #10: Being Sloppy With Your Topcoat

You put on your color with careful precision--congrats! Now don't ruin that with a messy topcoat application. "I see this all the time," says Madeline Poole, Sally Hansen global color ambassador. "Women think, It's clear! You can't tell. But really, you can once it dries." The reason? Shrinkage. (Yes, that's really what it's called!) "Topcoats tighten as they dry, which is what can cause those little ridges if you don't put it on properly." Another downside: Those areas will also end up chipping faster.

Related: The Prettiest Beauty Gifts to Treat Yourself to This Holiday Season

Nail Mistake #11: Not Sealing Off the Edges of Your Nails

Nicks and chips tend to happen most at the tip of the nail, and yet, many women neglect to give that part a little extra topcoat love. Try this trick; it acts like Saran Wrap for the polish on that area: "Take a topcoat like Morgan Taylor Make It Last ($8.50, loxabeauty.com) and run a horizontal swipe of it over the bottom edge of your nail after you do your last coat," says Edwards. Let it dry, and repeat one more time.

Nail Mistake #12: Forgetting to Clean Up Your Cuticles

The biggest telltale sign of a DIY mani versus a salon one? Polish speckles on the sides and edges of your cuticles. "When you finish applying your topcoat, dip a thin cleanup brush in nail polish remover and lightly skim around the outer edge of the nail to remove any excess lacquer," says Hughes. "This helps make the paint job sharper and your manicure last longer." Don't own a striper brush? A pointed cotton swab works too.

"This makes the polish look more putty-like, giving the illusion it's drying faster," says Remark. "But really, it's only changing the consistency of the polish." Another hack that doesn't actually work? Blowing on your nails. "Technically nail polish doesn't dry--it cures," she says. The only way to do that is to expose it to oxygen, so blowing on them does nothing to speed up the process. You also risk tiny drops of saliva getting on your nail (yuck), which can create bubbles in the polish. So is there anything that does make nails dry faster? Remark recommends using a quick-dry spray because it's designed to make polish oxidize from the inside out.

Mistake #14: Starting Over If Your Mani Gets Smudged

Good news: There's a fix for minor smudges, and it doesn't require repainting your nails. Enter Kur Instant Smudge Fix by Londontown ($14, londontownusa.com)--or as we like to call it, the Mani Saver. If the smudge is light enough that you can't see the nail through the polish, just slick one coat of this stuff over your whole nail, and let it dry for 30 seconds. Then reapply your topcoat. Your polish will look good as new.

Treating your hands and nails should be a more regular part of your beauty routine--not just a once-a-week thing. "A major part of manicure maintenance is keeping your nails and cuticles hydrated, especially when you are using your hands often (i.e. washing dishes, doing laundry, constantly typing, etc.)," says Skyy Hadley, celebrity manicurist and owner of As U Wish Nail Spa in Hoboken, New Jersey. She recommends applying cuticle oil to your nails and cuticles every other day. "This will restore moisture and also help prevent chipping and splitting," she says.

When you pick at gel polish, you're actually removing layers of your nail with it. That's because gels bond to your nails. If you're in a pinch and can't make it to the salon for a removal, Paintbox creative director Julie Kandalec taught us this technique: First, file the topcoat off with a nail file. ("You want to file into the color, but not all the way down to the nail," she says.) Then soak a cotton ball in pure acetone until it's fully saturated. Place the cotton ball over your nail, and wrap tinfoil around it. ("That helps keep the heat in, which prevents the acetone from evaporating," she adds.) Let your nails soak for 10 to 15 minutes, and then use an orange wood stick to push the polish off. "You want to go in the direction your nail grows, from right above the cuticle to the tip," says Kandalec. "If you go the other way, it can cause damage to the nail."

More from Glamour:
10 Things He's Thinking When You're Naked
56 Phenomenal Wedding Dresses That Will Make Your Heart Skip A Beat
8 Super-Easy Steps for Looking Flawless--Fast!
14 Seriously Cute Hairstyles for Curly Hair
13 Celebrities Who Have Hot Siblings
10 Rules Of Being Friends With Benefits