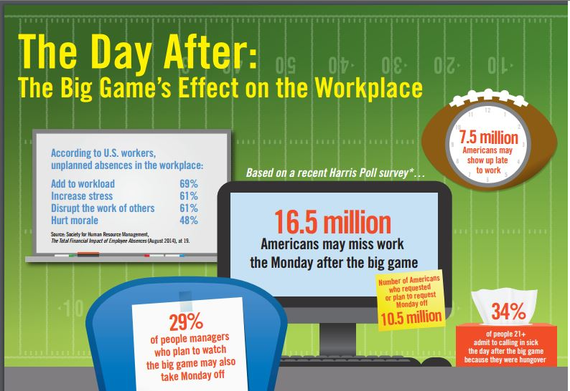 The Workforce Institute at Kronos recently conducted a survey to assess the impact of the Super Bowl on worker absences on Monday, February 8. According to the study, 77 percent of American workers plan to watch Super Bowl 50. The results suggest that one in 10 U.S. workers, or an estimated 16.5 million employed U.S. adults, may miss work the day after Super Bowl 50 due to the game, with nearly 10.5 million Americans having already requested or plan to request the day off in advance.

Here are a few survey highlights:

When asked to identify specific Super Bowl-related reasons that contributed to missing work or showing up late the following day, several trends emerged among those who have ever called in sick, taken a pre-approved day off, showed up late unannounced, or arranged to arrive late to work the day after the Super Bowl:

One encouraging finding for leaders concerned about absenteeism is that 74 percent of full-time/part-time employed Americans claim that they would tell their boss the truth about why they missed or showed up late to work unexpectedly if a personal, non-essential activity such as watching the Super Bowl or attending a concert, sporting event, or party caused them to miss work or come in late the following day.

What about you? Are you feeling the Super Bowl Flu coming on? Take the poll:

Infographic on Super Bowl Impact on the Workplace