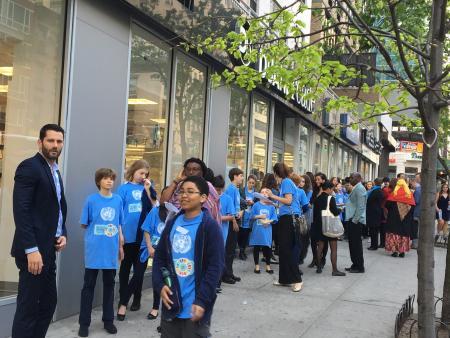 At the United Nations, 175 countries signed the Paris Agreement signaling their intent to join. This is by far the largest number of countries that have signed an international agreement on the first day it was open for signature. And countries that account for 50 percent of the world's emissions also announced that they intend to formally join the agreement this year. This puts us within striking distance of the Paris Agreement entering into force this year. Momentum on international climate action continues as countries show they are serious about addressing the defining challenge of this generation.

For international agreements like the Paris Agreement there is typically a three-step process. The ceremony in New York on April 22nd kick-started each of these steps.

The first step is for countries to sign onto the agreement. Signing shows a countries intent to formally join the agreement while they work through their domestic process. Almost every country in the world showed their continued support for stronger international climate action when a record 175 countries signed the Paris Agreement on April 22nd (see list of the signers).

The last step for international agreements is for them to "enter into force"- to become an international legal agreement. In order for the Paris Agreement to "enter into force" 55 countries representing 55 percent of the world's emissions must formally join the agreement. Countries accounting for 50 percent of the world's emissions have now either formally joined or signified that they will take that step this year (see figure). This put us easily within reach of meeting the 55 percent threshold to have the agreement enter into force this year. I continue to be confident that others will join this year and ensure that the Paris Agreement enters into force before the calendar is changed to 2017. 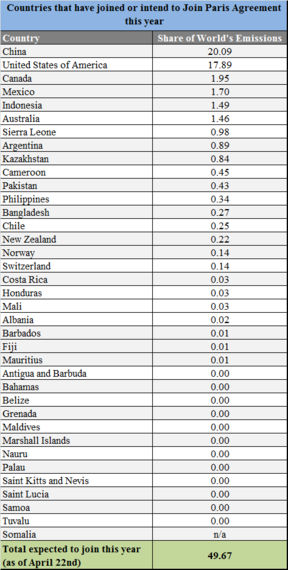 The speed at which countries are taking these steps is a clear sign that countries want to be on the right side of history. After all, who wants to be remembered as the last country to formally declare that they will take the necessary steps to address climate change?