There are certain determinants of health that are largely, if not entirely, out of your control. Your genetic makeup and biology have major bearing on your overall wellbeing, as do any number of socioeconomic factors, and your access to high-quality care. If you have an inherited health condition, and you are struggling to earn a living wage, your path to health is going to be rockier than that of someone who doesn't and isn't.

What's more, there is no one definition of what "good health" means -- and many ways of getting there. Your version might include a lot of yoga and a vegan diet; mine might center around finding medications that safely and effectively address a chronic condition. Neither of us is wrong.

But there are individual behaviors that have been shown -- in many cases definitively -- to help improve and maintain women's health. Habits that have a direct and measurable impact on women's bodies and minds, and that healthy women therefore embrace. Here are 19.

A study published last November found that women with breast cancer who felt socially isolated were more likely to die from the disease than those with closer ties, while another found that women with advanced ovarian cancer who had lots of social support had significantly lower levels of a key protein linked to more aggressive types of the disease. Other studies have also tied friendship to better cognitive health and longevity.

2. They have a screening plan ...
Who should get screened for what, and when, is an inexact science, and leading medical organizations disagree on the standards. When it comes to mammography for women with typical breast cancer risk profiles, for example, the American Cancer Society recommends screens starting at age 40, while the US Preventive Services Task Force recommends biennial screening for women age 50 and up. Healthy women read up on their options and make informed decisions about what's right for them with (and this is key) a team of qualified providers they've carefully assembled, and in whom they trust.

3. ... And they become experts on their own bodies.
No nurse or doctor can ever know your body as well as you do, which is why healthy women tune in to theirs and speak up when something seems off. They do monthly self-breast exams, track their menstrual cycles, note where their moles are (and if they've changed) and pay attention to any unusual symptoms. Not only is this intimate knowledge of their body a way for women to revel in its strength and awesomeness, it ensures they're active participants in their own health.

4. They take medication seriously.
Research suggests that when it comes to medication adherence, women are worse than men. (In one survey, one-third of women stopped taking a drug for a chronic illness or serious medical condition, for a variety of possible reasons: cost, forgetfulness and confusion about how to take it, to name a few.) Healthy women understand that not being vigilant with medication has the potential to compound serious problems, and they also understand that taking medication carries with it risks and benefits. 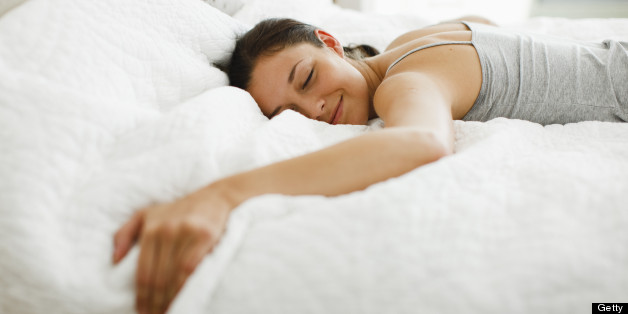 The list of reasons why sleep matters is as long as it is varied, but the bottom line is, it's a basic human need. And on the whole women don't get enough of it: A 2007 National Sleep Foundation poll that focused on women found that roughly 3 in 10 said they get a good night's sleep only a few nights a month or less. But healthy women know that getting enough sleep, and ensuring it's high-quality (meaning not disrupted by text messages, or glowing lights from electronics, for example) are critical factors in keeping their minds and bodies strong and do everything they can to get plenty of rest.

6. They have great sex -- coupled and alone ...
Sex isn't just good for pleasure (or procreation); research suggests it can boost the immune system, lower blood pressure and help improve women's bladder control by working the pelvic floor muscles, WebMD reports. One preliminary study even found that orgasms could have brain benefits: When researchers took MRIs of women mid-orgasm, they found they had increased blood flow to all parts of their brains.

7. ... And they're safe while doing it.
When it comes to sex, healthy women know it's all about protection, protection, protection. In the U.S., a whopping 19 million new sexually transmitted infections occur each year, and while both men and women are affected, women have "more frequent and more serious health problems" related to STDs than men, the Office on Women's Health at the Department of Health and Human Services explains. Healthy women who chose to be sexually active make sure there's always an effective barrier between themselves and their partners.

8. They find an exercise approach they like, and stick with it.
Yes, this is yet another article telling you what you already know -- that it's important to exercise. There is simply no way around the fact that being active is a fundamental part of good health, and research shows that persistence matters. One study comparing women in their 70s found that those who got the most exercise (and ate the most fruits and veggies) were eight times less likely to die during the study period than those who got the least. Healthy women know it's imperative to find an exercise program that works for them, and then work at it, day-in and day-out.

9. They eat according to their life stage ... 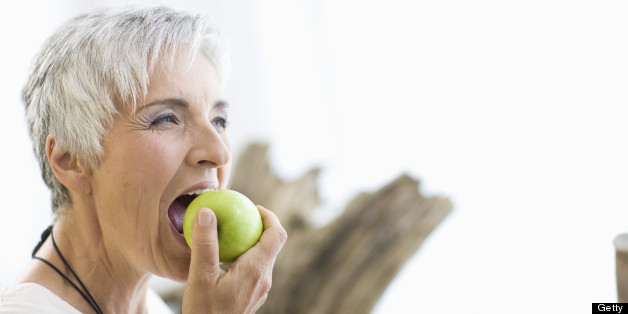 The "best" eating approach for health and longevity is a matter of debate, though public health experts generally agree on some version of a balanced diet including lots of fruits, vegetables and whole foods. But while healthy women may differ in the specifics of their approaches, they recognize the importance of cluing into how nutritional needs change over time. Women who are thinking of becoming pregnant, for example, need to make sure they get enough folic acid, while aging women have to pay particular attention to calcium. Healthy women also make sure to discuss nutrition with their healthcare providers.

10. ...And take cues from the Japanese.
As far as good examples go, you could do far worse than look toward Japan, where the women have the highest life expectancy in the world. As Fox News reports, a girl born in Japan in 2012 can expect, on average, to live for 86.41 years. Though universal healthcare is one contributing factor (and one that's largely out of individual women's control), experts also attribute their longevity to strong social ties (see number one on this list), a diet that's low in fat (though relatively high in salt) and a comfortable standard of living into retirement, according to The Guardian.

11. They watch their alcohol consumption.
The fact is, alcohol affects women differently than men. Women are more vulnerable to its effects, even if they drink less, and those potential effects are serious: Women who regularly consume more than about seven drinks a week are at greater risk for serious injuries, hypertension, stroke and even cancer. The National Institute on Alcohol Abuse and Alcoholism defines "low-risk" drinking for women as no more than three drinks on any day, and no more than seven drinks per week.

12. They don't neglect their hearts.
In the U.S., 1 in 3 women dies from heart disease, making it the number-one killer of women (and men), but according to the American Heart Association, only 1 in 5 women believe heart disease is, statistically speaking, her greatest health threat. Healthy women understand that while certain risk factors are beyond their control, others (like keeping blood pressure and cholesterol levels under control and not smoking) are not.

Breastfeeding can be difficult -- far more difficult to initiate and stick with than many women realize -- and more often than not, support is woefully scant. But breastfeeding doesn't just provide benefits to babies; it has also been linked to lower risk of Type 2 diabetes, breast and ovarian cancer, and postpartum depression in women, research suggests.

14. They monitor their mental health after they give birth.
Having a baby can be an incredibly exciting time, but it can also take a toll on women's mental health: Estimates suggest that roughly 13 percent of pregnant women and new mothers experience depression. There is a difference between the so-called "baby blues" -- mood swings in the days or first weeks after birth that are highly common and typically go away on their own -- and more serious postpartum depression, which lasts longer -- it can occur anytime within the first year after birth -- and is more debilitating. (According to the U.S. Department of Health and Human Service's Office on Women's Health, women should call their doctors if symptoms such as loss of appetite, severe mood swings and a lack of joy, last longer than two weeks.)

15. They're careful about what they put on their bodies.
Endocrine disruptors like pthlatates and BPA lurk in many cosmetics, and recent research surfaced concerns over the presence of lead in lipsticks. Though there are no clear-cut answers on how much exposure to these chemicals and substances is too much -- or whether certain products really pose a danger -- healthy women know it pays to read labels and to stay up to date on current research.

16. They wear sunscreen -- and never, ever use tanning beds.
Ask just about any dermatologist for their biggest anti-aging tip, and the answer is sunscreen. As in, wearing it every single day. But wearing SPF isn't just a matter of vanity, it's a potential lifesaver: Melanoma is one of the most common cancers in young adults, according to the American Cancer Society, particularly young women. Healthy women always avoid indoor tanning beds and limit their UV exposure by applying generous amounts of sunscreen.

17. They embrace their vaginas as-is.
When it comes to below-the-belt grooming and care, healthy women take a balanced approach. Waxing carries with it many possible risks, including infection and burns, and vaginal douching ups a woman's risk of pelvic inflammatory disease and pregnancy complications, among other things, because douching upsets the vagina's relatively delicate balance. Simply using a harsh soap (one that has perfumes, or doesn't have a pH that matches your own body's) can lead to uncomfortable irritation. That's not to say that healthy women can't groom themselves downstairs -- but they weigh the possible risks before proceeding to the salon or drugstore. 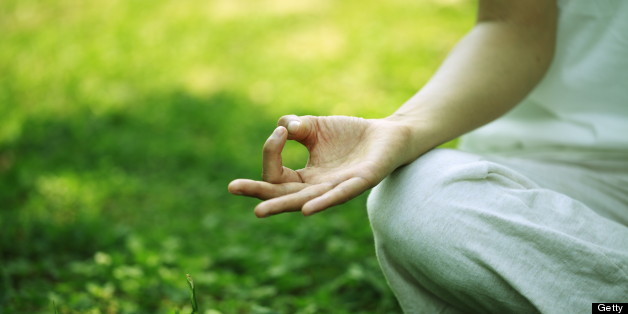 When it comes to health, the mind and body are inextricably connected. And meditation, which takes many forms and can fit into women's lives in many different ways, has been linked to a slew of potential health benefits including, but not limited to, some protection against heart disease, lower blood pressure and changes in areas of the brain linked to pain management and cognition.

19. They make stress management a priority.
Stress is as much a factor in overall health and well being as diet and exercise, and too much of it over the course of a woman's life is extremely harmful. Chronic stress has been tied to mental health issues, like depression and anxiety, as well as heart disease and weight gain. One study found that stress may take a particularly hard toll on 40- to 60-year-old women, in whom it's also been linked to digestive issues, joint and muscle pain and migraines. Healthy women know that finding good ways to manage stress (think exercise, mind-body interventions and investing in personal relationships) isn't just a means of leading a happier, more balanced life; it's a big factor in longterm wellbeing.