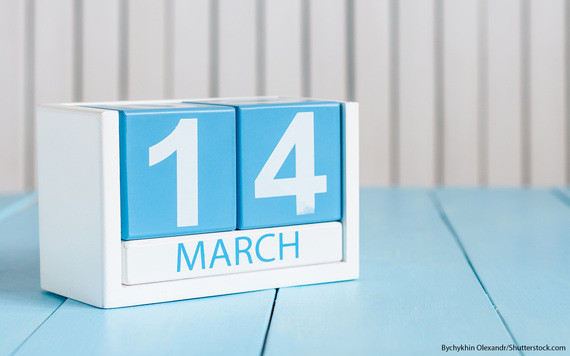 National Pi Day falls on March 14 and math whizzes across the globe will join together to honor the mathematical constant pi. Pi is the ratio of the circumference of a circle to its diameter. This irrational number begins with 3.14 ― hence the March 14 celebration ― and is estimated to continue for 10 trillion digits. While the concept of pi has been alive for nearly 4,000 years, National Pi Day wasn’t established until 1988 by Larry Shaw, a physicist at San Francisco’s Exploratorium science museum.

National Pi Day might be a little geeky, but math geniuses make it quite fun. Pi Day celebrations often center around the baking, eating and throwing of pies, with some revelers even participating in pi-recitation competitions. In 2015, those commemorating the occasion got to make a little Pi Day history by watching the clock strike 9:26:53 a.m. ― equating to 3.141592653, the first 10 digits of pi ― a phenomenon that happens just once every one hundred years.

Government recognition of Pi Day has even helped bring it to the classroom. On March 12, 2009, Congress passed a measure to support National Pi Day as a recognition of the significance of National Science Foundation math and science education programs. Schools are encouraged to celebrate the day with activities that help students learn about Pi and make math fun.

Use these Pi Day coupons and freebies to celebrate math’s biggest day of the year, while saving money at the restaurants you love. Making your own National Pie Day foods is great, but if you’d rather let someone else to the work, here are plenty of Pi Day deals ― including Pi Day pizza deals ― with the help of CouponSherpa, PromoCodeWatch, RetailMeNot, SlickDeals and the retailers themselves.

Additionally, The Exploratorium ―The San Francisco science museum where National Pi Day was established ― is offering free admission and a host of activities to commemorate the occasion. And they wrap up all festivities with ― you guessed it ― a piece of pie for each guest.

You’ll have to work a little bit for this deal; but free pizza for 3.14 years seems worth it. On March 10, Pizza Hut announced their partnership with math genius John H. Conway to have a contest on Pi Day. The game is simple: Conway will write three complex math problems on Pizza Hut’s blog. You must comment your answer ― each comment is time-stamped ― and the first person to get each right has the chance to win free pizza for 3.14 years. That’s a lot of pie. The contest begins on March 14 at 8 a.m. EST and the prize will be awarded in Pizza Hut gift cards ― totaling almost $1600.

Looking for the best deal before you buy? Take a look at HuffPost Coupons where we have hundreds of promo codes from brands you trust, including food & drink coupons.