There are plenty of ethnic cuisines that America has doused in the thick, sweet sauce of appropriation, but perhaps none more so than Chinese food. There's a time and place for things like sweet and sour chicken and crab rangoon, but it never feels good to be expecting a plate of mapo tofu only to get your food and realize you've walked into a trap set by General Tso.

To find out how to tell an authentic Chinese restaurant from an Americanized one, we called up our friends at LA's gone-too-soon Starry Kitchen (though their funemployment has been interrupted by a cookbook/memoir deal!) and spoke with co-owner Nguyen Tran, who also shared some thoughts from his chef/wife Thi Tran. None of these are strict rules, and even a place that's catering towards a non-Asian clientele might have a few deep-cut dishes on the menu. But if you see more than a few of these red flags, you might want to rethink what you're putting between your chopsticks. 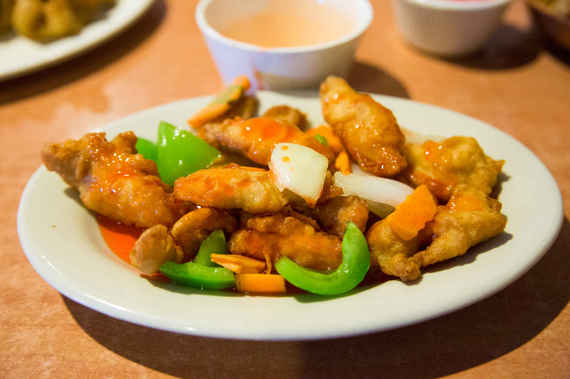 Sweet and sour sauce that's starchy or sugary
"Sweet and sour is also an authentic Chinese preparation, so this is one that comes to taste. If it's saccharine and sweet, it's definitely an Americanized Chinese place. They do say that sugar is the secret ingredient in Chinese food, but it's to add balance to salt or savory. It shouldn't overpower [the other flavors]. It's lightly salty and lightly sweet, but not like when you get a sweet tooth.

A lot of it is prepackaged anyway, so it's been engineered for an American palate. If it looks thick like molasses, then it's probably Americanized. It can be made on the fly too, it's usually just sugar, vinegar, and other ingredients poured onto the chicken. But if you need a machete to cut through it..."

Egg foo young is on the menu
"Sometimes authentic places will have this on the menu, but it's really an American invention, and it can be disgusting. It's like a savory pancake that's an amalgamation of vegetables, batter, and shrimp that's deep-fried and topped with gravy. It loses all the texture when you put gravy on it, and it just becomes mush on mush."

Kung pao chicken is front and center
"This is actually a Chinese dish, so it kind of depends. It could be a gateway dish, but if they showcase it, more than likely it's an Americanized Chinese place." 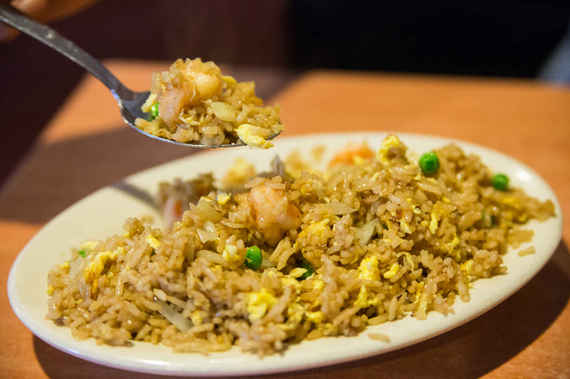 You must select the protein for the fried rice
"In Americanized places there's a generic fried rice formula. Fried rice equals choice of protein plus fried rice. You're ordering by protein. But with more authentic places it's more about marrying a specific protein to a specific profile; that's what's unique about stir-fry. So instead of shrimp fried rice, you'd be looking for something like yeung chow fried rice."

The use of the term potstickers
"I don't even know where that word comes from. I couldn't understand for years what my American friends were talking about."

Mu shu pork
"This is another that's actually a real Chinese dish, but it's one that I think no Asian has ever eaten in their life."

Crab rangoon
"You're not going to see that. I don't think I've ever seen sour cream in any dish in a real Chinese restaurant." 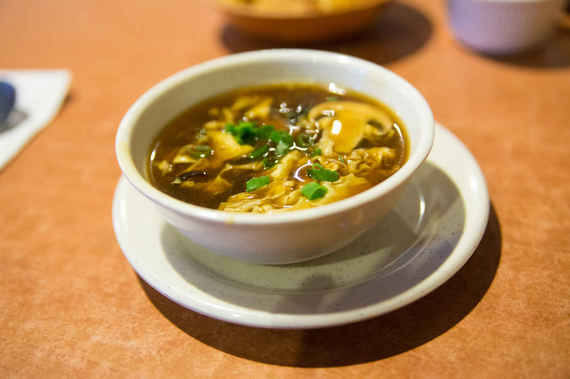 Egg roll and soup lunch special
"This is a sweeping generalization, but many authentic Chinese restaurants don't even have egg rolls on the menu. This is my bias, but Chinese egg rolls are some of the worst egg rolls I've ever had in my life. These are the Americanized ones. It's all cabbage, wrapped in a really crappy wrapper, it's fat, and you're dipping it in sweet and sour."

A giant container of soy sauce on the table
"A lot of people just add soy sauce to everything they eat. You should try the food first; soy sauce is the equivalent of salt. That's the exact reason it's there. If there's a huge bottle or it looks like it's replenished a lot, that might be a sign. You might not even see it that often at an authentic restaurant."

For the other 10 indicators that your Chinese restaurant isn't what it claims to be, head over to Thrillist.com!