SAN FRANCISCO (AP) -- A museum volunteer has unearthed what the Smithsonian Institution believes to be the first -- and perhaps only -- color photographs of San Francisco after the 1906 earthquake and fire that nearly leveled the city.

The six never-published images were snapped by photography innovator Frederick Eugene Ives several months after the April 1906 "Great Quake," the San Francisco Chronicle reports. Most were taken from the roof of the hotel where Ives stayed during an October 1906 visit.

They were stowed amid other items donated by Ives' son, Herbert, and discovered in 2009 by National Museum of American History volunteer Anthony Brooks while he was cataloguing the collection.

Although hand-colored photographs of the quake's destruction have surfaced before, Ives' work is probably the only true color documentary evidence, Shannon Perich, associate curator of the Smithsonian's photography history collection, told the Chronicle.

She says Ives was one of only a few photographers experimenting with color photography in the early 20th century and that his San Francisco images were meant to be viewed through a 3-D device he invented but which never became a commercial success.

"Can you imagine how shocking these were?" she said.

Ives is known to have visited San Francisco in October 1906, but it's unknown if he shot all the newly discovered photos during that trip or if he also made an earlier one.

The pictures are street-level shots of San Francisco's shattered downtown and rooftop views overlooking miles of ruins. They depict buildings damaged by fire and broken by the shaking ground. Some of the buildings still exist.

The process he used to produce color images, creating separate slides for each primary color in the light spectrum, required a long exposure and therefore was not conducive to capturing people and objects in motion.

Ives is well-known for inventing the halftone reproduction process still used to print photographs in newspapers.

Take a look at these stunning images in the slideshow below. All photos courtesy of the Photographic History Collection at the Smithsonian's National Museum of American History. 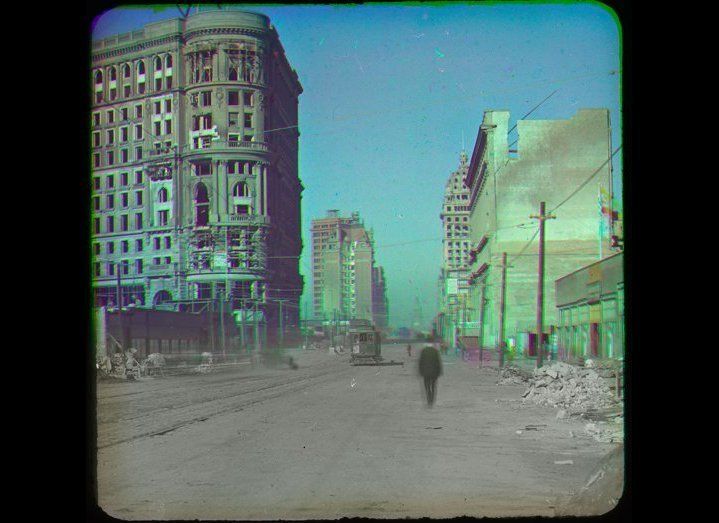