In an era when pennies are being banned and even discontinued, one pretty penny recently got very lucky.

The Lincoln cent is not just any copper penny.

While today, pennies are made from copper-coated zinc, the U.S. Government halted the minting of copper-coated bronze pennies in 1942 because copper was needed to manufacture ammunition during World War II, according to the Professional Coin Grading Service.

Somehow a few copper-coated bronze planchets were accidentally minted during that time -- and finding one of these is a collector's dream. According to PCGS, the 1943 Bronze cent is the "most desirable and valuable of all Mint errors."

Simpson already owned two of the rare pennies minted in Denver and Philadelphia. This third bronze cent -- which was made in San Francisco, the only other Mint functioning in 1943 -- has completed his collection, according to the Daily Mail. 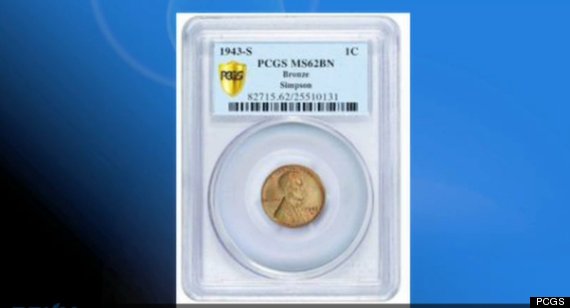 "As he held it he reminisced about the 1943 'copper' Lincoln cent he found in change when he was a youngster, but that turned out to be a fake," she added.

Simpson previously bought the 1943-D bronze cent that the same dealer sold to him for a record $1.7 million in 2010.

Wacky Finds Worth Big Bucks
More:
Moneytexas rangersauctionsrare coin
Newsletter Sign Up
Everything you should have learned in school but didn’t
Subscribe to HuffPost’s money and living email.
Successfully Subscribed!
Realness delivered to your inbox