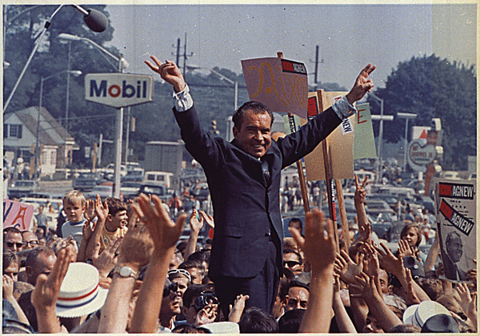 No, it's not 1968, despite the racial strife and political turmoil. "When we start suggesting that somehow, there is this enormous polarization and we're back to the situation in the 1960s -- that's just not true,'' President Obama said last week. "You're not seeing riots and you're not seeing police going after people who are protesting peacefully.'' Not to mention the fact that there is no antiwar movement convulsing the country.

Still, there are some revealing parallels between 2016 and 1968. The 1968 election occurred at a time of wrenching cultural and political change -- black power, women's liberation, gay rights, student protest. 1968 also saw a furious backlash against those changes (the George Wallace campaign). What is Donald Trump but the leader of a resistance movement in defiance of the growing power of minorities, immigrants, women, young people, gays and the unchurched?

Of course, the electorate in 2016 is vastly different from what it was in 1968: less white, better educated, less religious and with more empowered women. All of which works to the Democrats' advantage.

The narrow winner of the 1968 election was Republican Richard Nixon. Nixon wasn't running as a racial backlash candidate in 1968. That came later, in 1972, when he used his southern strategy to fold the Wallace vote into the GOP. The evidence? Nixon's worst state in 1968 was Mississippi (Nixon 14 percent, Wallace 63 percent). Nixon's best state in 1972 was Mississippi (Nixon 78 percent).

In 1968, Nixon was a candidate of the center. He was perfectly positioned in the Republican contest, between Nelson Rockefeller on the left and Ronald Reagan on the right. And again in the general election, with Wallace on his right and Hubert Humphrey on his left. Moreover, wherever Humphrey and Wallace went, a riot seemed possible.

By taking as few positions as possible (he was reported to have a secret plan for ending the Vietnam war), Nixon promised stability to a country in turmoil. He pledged he would ``bring us together.''

1968 was a rare year in which voters were looking for an experienced political insider, someone who knew how to make government work. No one was more of an insider than the former congressman, senator, vice president and presidential candidate. Nixon was resurrected from the political dead -- after losing the presidential race in 1960 and the race for governor of California in 1962, Nixon told the press, "You won't have Nixon to kick around any more.'' He was brought back to political life because he offered something voters in 1968 desperately wanted: order.

There is no Nixon figure who can plausibly promise to "bring us together'' this year. Both Hillary Clinton and Donald Trump are polarizing figures.

If voters are looking for experience and a steady hand -- qualities they saw in Nixon in 1968 -- Clinton has the advantage. It's her strongest asset, according to Gallup. Twice as many voters say Clinton "has the experience it takes to be President'' (62 percent) as say that about Trump (31 percent). The Democrat is also seen, though by a smaller margin, as someone "who would display good judgment in a crisis'' (48 percent say that applies to Clinton while 37 percent believe it applies to Trump).

Like Nixon in 1968, Clinton is a charter member of the political establishment. She's been a Washington political figure for 23 years. In 1968, Nixon had been in Washington for 21 years. Up to now, Clinton's standing with the establishment has been a weakness that her opponent, Bernie Sanders, skillfully exploited in the Democratic primaries. In a race against Donald Trump, being seen as experienced could work to her advantage.

But Clinton has a problem Nixon didn't have in 1968. When voters are anxious and dissatisfied, they tend to favor the party out of power. That meant the Republicans in 1968. But Clinton is from the President's party. That puts her on the wrong side of the "change'' issue. Last month's Pew poll asked voters "Do you think Hillary Clinton would change the way things work in Washington?'' A majority of voters said Clinton wouldn't change things much. And Trump? Voters think Trump would change things all right, but most of them believe he would change things for the worse.