Scientists exploring marine life in the Gulf of Mexico earlier this year uncovered a shipwreck site believed to be 200 years old. The site was scattered with cannons, muskets and a variety of other items, according to the Department of Interior’s Bureau of Ocean Energy Management (BOEM).

The site was first discovered in 2011 when the Shell Oil Company was conducting a gas survey of the area and saw an unknown object on their sonar, the BOEM said in a press release yesterday. The National Oceanic and Atmospheric Administration (NOAA) was planning a 56-day expedition of the area the following spring, so government officials requested that they also check out the site and see what they could find.

"Artifacts in and around the wreck and the hull’s copper sheathing may date the vessel to the early to mid-19th century," Jack Irion, a maritime archaeologist with the BOEM, said in the press release. "Some of the more datable objects include what appears to be a type of ceramic plate that was popular between 1800 and 1830, and a wide variety of glass bottles. A rare ship's stove on the site is one of only a handful of surviving examples in the world and the second one found on a shipwreck in the Gulf of Mexico."

Irion said that as part of their expedition aboard the NOAA ship Okeanos Explorer, scientists also explored three other shipwreck sites in largely unexplored areas of the gulf.

On April 19, Irion announced that the team was exploring a shipwreck site that was discovered during the 1980s but has only been probed by researchers twice. They explored "large, stoutly built and remarkably intact" wooden hull ship estimated to have sunk somewhere between the mid-19th and early-20th centuries, which has since been invaded by sea life.

They also explored a 197-foot wooden ship that sank near the Mississippi River, and posted footage of the expedition online.

In a press release for the expedition, Irion said that scientists estimate there are 4,000 shipwreck sites on the floor of the Gulf of Mexico, 600 of which have been discovered by the oil industry in the northern Gulf.

One such site, know as the "Mardi Gras" shipwreck, was discovered in 2002 during an oilfield inspection by a gas company, which agreed to fund an expedition to the site by researchers from Texas A&M.

When researchers excavated the site in 2007 using a remotely operated vehicle (ROV), they found the degraded remains of a privateer ship along with artifacts that had been manufactured in Great Britain, Mexico, France and possibly the United States, according to a paper published in the International Journal of Nautical Archaeology.

Based on pictures of the artifacts, researchers estimated the ship was wrecked sometime between 1808 and 1820, during "a tumultuous time in the Gulf of Mexico, typiﬁed by colonial conﬂicts, privateering, and illicit trade, as well as legal commercial activity."

They speculated the ship may have been a gun runner used during the War of 1812 or a British trading vessel.

Other oil company projects in the Gulf have uncovered ships that sank during World Word II. During a pipeline survey in 2001, the Shell Oil Company and BP discovered the German submarine U-166 not far from the S.S. Robert E. Lee, the U.S. passenger freighter it took down in 1942.

Twenty-five passengers and crew members died in the attack on the Robert E. Lee, and the U.S. military sank the submarine shortly thereafter, killing all 52 crew members. As with many other sites discovered by oil companies, BP and Shell agreed to fund a video investigation of the site using ROVs, which are now posted online.

Check out a slideshow of images from the 19th century ship, below: 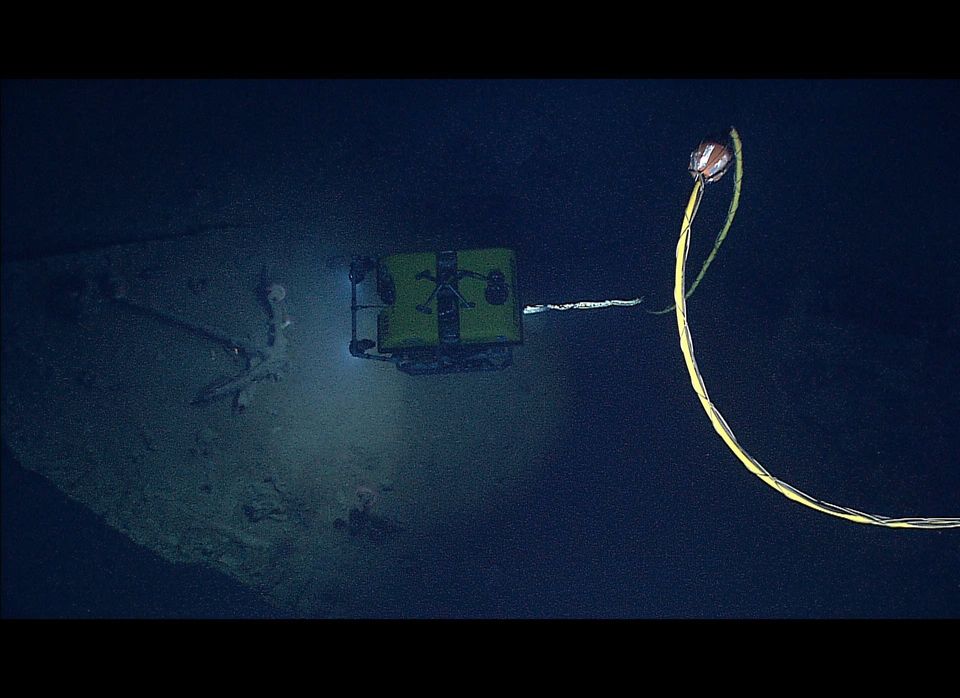 1 / 7
Historic, 19th Century Shipwreck Discovered in Northern Gulf of Mexico
NOAA's Seirios Camera Platform, operating above the Little Hercules ROV, images the ROV and an anchor inside the hull of a copper-sheathed shipwreck in the Gulf of Mexico. The wood has nearly all disintegrated after more than a century on the seafloor.
NOAA Okeanos Explorer Program