When a two-foot long blood clot, running from the legs and into the heart, threatened the life of 62-year-old California man Todd Dunlap, doctors at the University of California, Los Angeles, had two options.

The first: Open-heart surgery, which has a notoriously long heal-time after the procedure, and involves dividing the breastbone to gain access to the heart. The second: A minimally invasive procedure that "vacuums" the blood clot right out, but had never been performed before in California.

Dunlap underwent the second option -- a three-hour procedure that was done with a device called an AngioVac -- on Aug. 14. A week later, he was already able to go home.

"Once in place, the AngioVac quickly sucked the deadly clot out of Mr. Dunlap's heart and filtered out the solid tissue," Dr. John Moriarty, an interventional radiologist at the UCLA Medical Center, said in a statement. "The system then restored the cleansed blood through a blood vessel near the groin, eliminating the need for a blood transfusion." 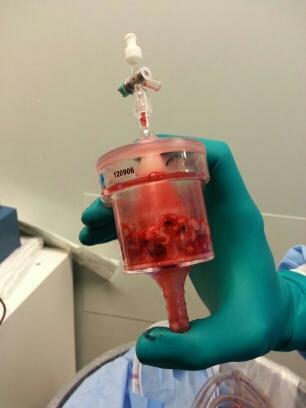 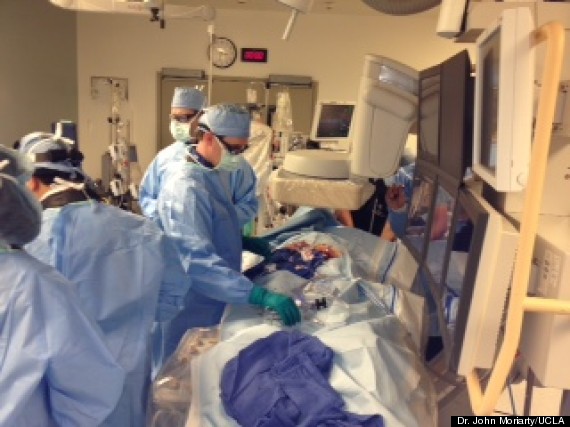 Doctors had previously tried giving Dunlap a clot-busting drug, called tPA, before the procedure, but it didn't work because the clot was so big.

"The AngioVac was the last resort for Mr. Dunlap," Moriarty said. "The clot clogged his heart chamber like a wad of gum in a pipe. Every moment that passed increased the risk that the clot would migrate to his lungs and kill him. We couldn't have asked for a better outcome."

Dunlap's blood clot was caused by deep vein thrombosis, which is when blood clots form in the veins in the legs, and can occur when a person doesn't move for long periods of time, is dehydrated, or is on birth control pills. The danger is when the blood clot breaks off and travels the the heart or lungs, which can cause death.

For more on the story, watch the clip from ABC7 above.