Getting married to the person you love is such an exciting experience. Just the thought of having someone else to ride through the storms of life with you; someone to come home to; someone who is committed to you and only you; someone to laugh with or cry with; someone you can lay in bed with and eat cold pizza at 3:00 a.m.; someone who calls you out when you're wrong; someone who will support that crazy dream. All of that! It's like a sleepover with your best friend for the rest of your life.

One of the things that many people think about is the kind of wife/husband they'd be. Have you ever thought about that and it just scares you straight? It's like a forced, voluntary pressure to be the best at it, hands down. You want your spouse to think you're the best thing since slice bread and government cheese. You want them to desire you and never have eyes for another person. All of that translates into fear for some people. Again, that voluntary pressure to be the best; to be perfect. Thoughts flow through your mind such as "What if I am not good enough... What if I get tired and want to give up... What if they just don't do it for me anymore and my eyes start drifting? These are real thoughts that some may think about when considering marriage. Yet they still want it!

So how does one get over that fear? How do you cancel the thoughts of not being good at this? 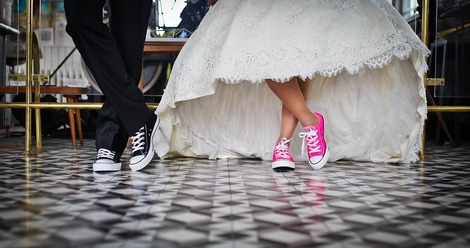 1. Understand this, in any relationship, you will most likely mess up at some point. Big time too! And guess what, your relationship won't be unique to those storms. Everyone goes through "that life": * You will act out of emotions verses logic. * You will say some really bad things and you will question the walk down the aisle. * That cutie from the coffee shop will give the look that pretty much says "Say the word and its on." * You will possibly have those thoughts about leaving your spouse while staring into their eyes. * You will slam the door and walk out when your spouse is the most vulnerable. * You will question your worth, to them and to yourself. * You will throw your hands up for the very last time. These things happen and its real! We're talking about spending a lifetime with another person....trust and believe it WILL happen. Anybody that says that they don't experience at least one or two of those things is lying; to themselves and to their spouse. So, knowing the cons going into the whole marriage thing doesn't feel like pressure anymore (and of course, the pros far outweighs the cons). It's like you are going in and you already know you will (not if) miss it in some areas. I don't know for you but for me, when I'm getting ready to do something big, I want to know all the bad stuff first lol...after that, I will make a decision on whether I will go forward. But there's a sense of security when you know it's not going to be easy and you have some bumps ahead of you. It's like you can prepare for it ahead of time.

2. So how do you get past that? It's a CHOICE you have to make. This is a different type of choice though; it's the kind of choice/decision that you make between you, your spouse and God that no matter what, you are in it till the VERY end. Don't get scared by that! It's ok to be in it till the very end. Why go into something to leave midway? Too commonly, people treat marriage like a car. The minute stuff starts going sour, (transmission, engine, got over 100k miles, etc) they find every reason in the book to trade it in or even sell it. It's too much work and too expensive at times so lets cut ties. And with cars, that is realistic and understandable, but not when you are dealing with a human being. But, if you have that mind set, as it relates to marriage, then when this "new car" starts going sour, it will be traded-in too. Now, I'm not saying that cutting ties aren't necessary in certain cases. Surely if you total your car, there's no fixing that. Likewise in marriages, if its totaled beyond repair then you do what's necessary.

Remember, some things in life requires us to hang in there; there's no magic. You can't run every single time to the next best thing. I mean, is it really the next best thing or is it the temporary fix? That really speaks on your endurance or lack thereof. And I get it, sometimes it just can't work. I'm a product of a divorce, so I understand. But trust me when I say, it's a choice. Some of us go into marriage with CHOICES versus just A CHOICE.

Voting Made Easy
Register to vote and apply for an absentee ballot today
Register now
More:
weddingsLoveengagementRelationshipsMarriage
Newsletter Sign Up
A weekly guide to improving all of the relationships in your life
Subscribe to HuffPost’s relationships email
Successfully Subscribed!
Realness delivered to your inbox