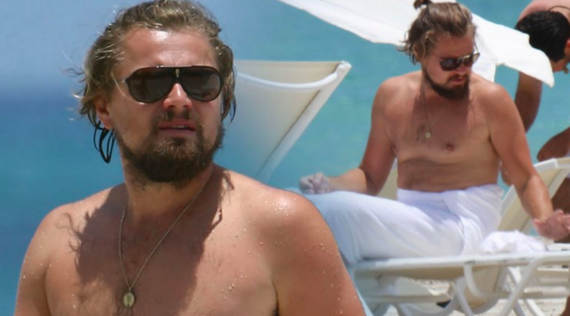 "Dad bods" are the new fitness standard for a growing bunch of men across the United States. What's a dad bod? Well, think Seth Rogan, Jason Segel or Leonardo DiCaprio on summer vacation and between movie roles - overweight, out of shape, and happy and content with his pasta, rose', and Victoria's Secret models. Basically, pudgy, cuddly, doughy, don't really care about how you look any more - that's the "dad bod". And some women are supporting the new trend if you believe the studies - partly because having a dad bod as a partner takes some of the pressure off them to stay in shape. Another rationale is that if the man is not as focused on his own body, he'll spend more time with, and take better care of his partner and family - or so the theory goes...

Dad bods are not healthy

There are so many things wrong with the dad bod movement - but I just want to point out a couple:

First up, no surprise - the dad bod is unhealthy:

The visceral fat (omentum) that gives you that dad bod belly is partly caused by the liver not processing healthy nutrients and irritating the surrounding organs, leading to the growth of belly fat. This leads to high blood sugar, high blood pressure, high bad cholesterol, and ultimately - heart disease. Man boobs can also be a sign that something seriously unhealthy may be happening in your near future. Too much estrogen - one of the contributing factors to man boobs and the dad bod - is linked to prostate cancer, erectile dysfunction, diabetes, declining testosterone, and other serious health problems for men.

Second: man boobs - and the whole dad bod look - is not attractive. Forget what the studies say about women liking the pudgy doughy look. You don't want man-breasts - those are the genetic right of your female partner. Leonardo DiCaprio can get away with them because, well, he's Leo. You're not. I've seen Leo a bunch of times in person on the beach and he's always covered up. Last time I saw him at Malibu he had a member of his entourage standing waist deep in the water with a towel to cover him up (and give him a lighted cigarette) as soon as he showed some skin. The poster child of the dad bod is not even proud of it - so let's not evangelize it as if it's something to aspire to.

Losing the dad bod can be as simple as starting to adopt healthier choices and making a commitment to better health. And since you can't spot reduce your man boobs, you'll need to lose weight overall using a combination of exercise, diet, and lifestyle changes. Here are 7 ways to get you started:

1. You HAVE to lose weight (#nobrainer)

In addition to focusing on better nutrition, I recommend including PRIME Workouts, which you can read more about in Your New Prime: 30 Days to Better Sex, Eternal Strength, and a Kick-Ass Life After 40. Basically, PRIME Workouts include:

It's more strenuous than it sounds and it works. You don't need to spend hours at the gym to lose weight. You just have to exercise hard and with greater intensity as you age. Some of my best workouts are completed in 20-30 minutes and include PRIME workouts that incorporate explosive HIIT intervals lasting just 12-seconds each. Don't believe you can get a full workout in 20-30 minutes? Try doing weighted sled pushes at full power for 12-second intervals over that period - and then we'll talk.....

2. Stop eating so much processed crap - and ease up on the alcohol

As if you didn't know this already. Avoid all the white stuff - white pasta, white breads, and white flour etc. If you're not exercising (like most dad bod owners) all these carbs just end up being stored in your cells as fat - and you're on a fast track to adult onset diabetes.

As the saying goes, "abs are made in the kitchen" and this couldn't be truer than when you are looking to get back in shape. Focus on getting the right amount of protein, healthy vegetables, and good fats like coconut oils, almonds, and avocados. You also want to eat foods that are going to maintain an even glycemic load throughout the day and don't put you on a continual cycle of blood sugar spikes and troughs. If you want a simple and healthy eating plan to get you back on track then you can't go past the Mediterranean diet which is probably the closest parallel to what I eat on a daily basis.

And ease up on the alcohol. Beer in particular is an estrogen promoter (more on this below), and the hops in beer are a big contributor to the man belly and boobs. In addition, if your liver is processing alcohol all the time it can't efficiently metabolize fat. Alcohol also decreases testosterone and is toxic to the testes - so its a triple whammy - more fat, alcohol induced breast enlargement, and less testosterone - three things you want to avoid!

If you don't get enough sleep you'll end up craving carbs which puts your blood sugar on a roller coaster. That's why one of the best ways to lose weight is to literally "sleep it off". Also, if you're stressed, then your body is hard wired to put on more weight via the release of cortisol (the stress hormone). So think about incorporating relaxation techniques such as meditation or simply ditching your phone and going for a walk.

4. Stay away from foods that contain phytoestrogens

Natural estrogens called phytoestrogens, which are found in some foods, may cause an estrogen-like effect because they have an ability to bind to estrogen receptors. And too much estrogen, as we learnt above, can lead to weight gain, man boobs, and other problems such as prostate cancer. The foods you want to limit or avoid include soybeans and soybean products (e.g., soymilk, tofu, edamame; with the exception of fermented soy), inorganic meat products, conventionally grow fruits and vegetables (because of pesticide contamination), alcohol (particularly beer, due to the hops), and dairy-based foods.

5. Avoid bisphenol-A (BPA) in bottles and other products

Research has shown that exposure to BPA can lower a man's testosterone levels and fertility. BPA has also been linked to obesity and disruption of the thyroid gland, two factors associated with development of man boobs. More importantly, perhaps, is that BPA mimics estrogen, which can boost estrogen levels and place your estrogen-to-testosterone ratio in an unhealthy state. It's not enough to avoid water bottles and other plastic items that say they are BPA-free, since the alternatives (e.g., BPA-S and BPA-F) have been found to be hazardous as well. Choose glass or stainless steel containers for food and beverages and also avoid handling register receipts, most of which are contaminated with high levels of BPA. When the cashier asks if you want the receipt in the bag - say "yes" - or just trash it! Whatever you do, just don't touch it!

6. Stop using after-shave and other man-fragrances

I stopped using after-shave years ago after I started reading the research on what they were doing to me. Personal care and household products that have fragrances, such as after shave, shampoos, body wash, hair gels, body lotions, deodorants, soaps, conditions, detergents, air fresheners, and sunscreens can also harbor hormone-disrupting substances called phthalates. Who cares? You should, since exposure to phthalates have been associated with a reduction in testosterone levels in men. A 2014 study from the University of Michigan School of Public Health reported a significant relationship between phthalate exposure and a decline in T levels among men ages 40 to 60 years. You should aim to use personal care and household products that are fragrance-free or that are made with natural plant-based oils.

[Here's a tip if you can't give up the deodorant spray: next time you're spraying under your arms make sure you do it when you're actively "walking" - that way you don't breathe in the toxic manhood sucking fumes while you're spraying yourself]

While it's true you don't burn lots of calories while you're doing weight training, you will increase lean muscle mass as the fat drops off--along with those man boobs. In addition, weight training boosts the number of calories you'll burn throughout the day due to an increase in your resting metabolic rate. Focus on all the big muscle groups - legs, back, chest - and mix it up with a lot of body-weight exercises like push ups, pull-ups, dips, and weighted lunges. If you're new to weight training then spend a few sessions with a trainer (budget allowing) before going out on your own - as it's important to learn proper technique so you don't injure yourself. And if you want another sure fire way to burn calories and get lean, then start boxing!

Look, I'm not saying we should all aspire to be ripped superheroes like the images we see in the media. The models and actors on the cover of Men's Health and in the Marvel action movies don't even remotely look like that 99% percent of the time. They have to train for months just for a 5 second shirtless scene or a single photo. Staying in "action hero shape" is pretty much a full time job and few of us have the time or the inclination to carry around Tupperware containers with perfectly weighed portions of skinless chicken breast. What I am saying though is that you don't want to use the celebrity dad bods and your creeping middle age as an excuse for complacency and unhealthy habits. In between the dad bod and the god bod is a middle road of better health, more energy, better sex, more strength, increased fitness, and a better, longer life - purely as a result of you caring more about your health.

Dad bod-supporters have a common tune - "the less time spent on you, the more time you have for me!" It's a song usually sung by your significant other. Slipping into a dad bod is also a recognition that you're "done" with looking after yourself - that you don't need to try anymore - you have a life partner, your golf buddies, you may have some money for retirement; and life is on remote control - this is it!

Here's a sure fire way to explode that playbook - dying from a preventable chronic health condition linked to being overweight and unhealthy habits! Want to be a great partner? A great dad? Have a successful long-term career? Be a good friend? Well, start looking after yourself first and foremost - and don't slip in to the complacency of bad habits and a growing waistline just because it's the celebrity trend of the 2015 summer. Looking after yourself is the best way to look after others around you. Adopt some of the 7 tips above and start living the (long) life you deserve!