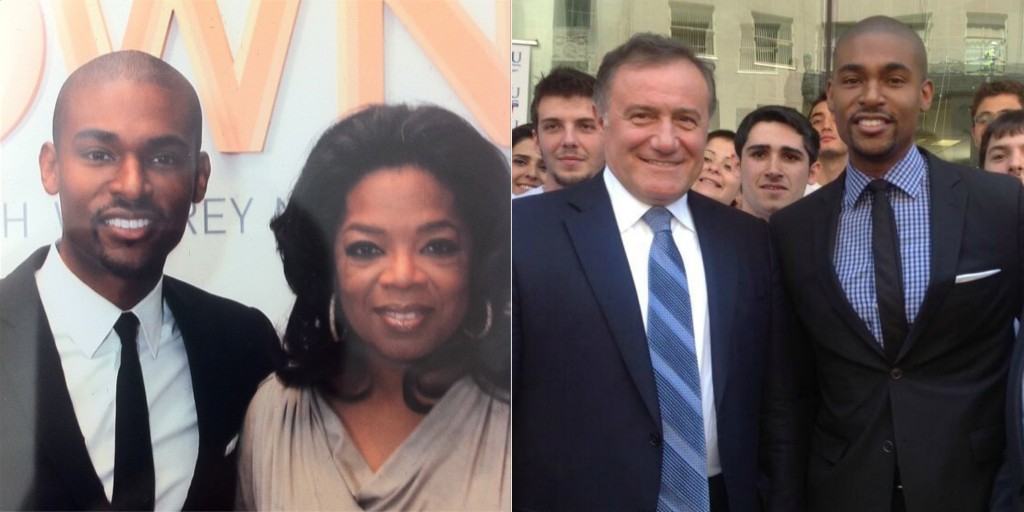 I have spent decades "being educated" -- in college, graduate school, numerous professional certifications, and now a Ph.D. program. All of that schooling and training helped shape the person I am today, but at no point in my life has there been a more profound education than my time working for Enver Yucel and Oprah Winfrey.

Enver and Oprah are two extraordinary people. And on top of that, they're both billionaires. On the surface, they appear to be totally different people. They are in different industries, have different family structures, practice different religions, and speak different languages. However, once you get past their written biographies and dig deeper, you will notice they possess many of the same successful habits.

I had the opportunity to work with both Oprah and Enver for six years collectively and those were, hands down, the best professional experiences of my life. I worked my ass off for them and in doing so absorbed everything I could.

It's my honor to share with you what I learned from them. Here is Part 1 of the 20 successful habits I learned working for two billionaires:

This is a very simple concept, but something you would think someone who has "made it" would stop doing. Not at all for these two. I saw them both spend a significant amount of time dedicating their resources to self-development (whether it be a new language, exercise, social media classes, etc.). The moment you stop investing in yourself is the moment you have written off future dividends in life.

2) Be Curious... About Everything

What the average person sees as mundane or overly complicated is not viewed the same way with a billionaire mindset. I once had a 30 minute conversation with Enver about the height of the curbs in Washington DC versus Istanbul, Turkey. Billionaires are incredibly curious; what the rest of the world thinks is a problem and complains about -- that's what these people go and work on.

3) Surround Yourself With "Better" People

I hope this is why they kept me around. Seriously, I never knew my bosses to keep anyone less-than-stellar in their inner circle. There were many times I thought to myself, "Damn, they have dream-teams built around them." Jim Rohn had it right, "You are the average of the 5 people you spend the most time with."

The last time I had dinner with Enver, as well as the last time I ate dinner with Oprah, there were easily 15 people at our tables, respectively. Coincidence? While most of us derive our key information from blogs or the newspaper, power players get their information from the source (other power players), directly. However, just because you can't call up the Obamas and break bread with them doesn't mean eating with others in your circle doesn't carry value. In one of my favorite reads of the last few years called Never Eat Alone, author Keith Ferrazzi breaks down how you can identify "information brokers" to dine with you. I've seen first hand how enormous the benefits are of this strategy.

5) Take Responsibility for Your Losses

I was working for Oprah during the time she was taking heat from the media about poor network ratings. I was also working for Enver during the closing of one of his prized divisions. What I witnessed them both do in response was powerful. Opposed to covering the losses up with fancy PR tactics, both stepped to the stage and said in essence "I own it and I'm going to fix it" and dropped the mic. Guess what? They sure did fix things (It's widely noted Oprah's network is realizing ratings gold and Enver's assets have probably doubled since the division closing).

6) Understand The Power Of "Leverage"

This is something that was quite a shock to me. From afar, a billionaire appears to be someone who is a master at everything. But, in truth, they're specialists in one or a few areas and average or subpar at everything else. So, how do they get so much done? Leverage! They do what they do best and get others to do the rest. Here's a great article on leverage. Keep in mind I see this done with wealthy people and their money all of the time -- they use OPM (other people's money) for most or all of their projects.

7) Take No Days Off (Completely)

I recall going on vacation with Enver several times, yachting up and down the southwestern coast of Turkey (also known as the blue voyage). Sounds ballerific, right? No doubt we had a great time, but mixed in with all that swimming and backgammon was discussion of business, discussion of strategy, planning and plotting. The best way I can describe this habit is thinking about your business or your idea like your literal baby. No matter your distance, you don't stop thinking of him/her (and after just having a second son, I can attest to this).

8) Focus On Experiences vs. Material Possessions

When you have money, your toys are big. However, the vast majority of money I saw spent on their "leisure" was on actual experiences versus the typical car, jewelry, and clothes we're familiar with seeing in music videos and gossip blogs. I recall one time at dinner with Oprah, I spotted a table of about 20 girls off to the side. I later found out Ms. Winfrey was treating some of her graduating girls from her school in South Africa to dinner in NYC. Experiences create memories, and memories are priceless.

This is another one of those successful habits every entrepreneur can attest to. A matter of fact, Entreprenuer.com created a great infographic outlining commonalities of the world's billionaires and one of the most prominent was this characteristic: billionaires are not adverse to risk. What intrigues me even more about Enver and Oprah was that even at their high financial status and success level, they still possessed a willingness to risk their most precious asset (their name and legacy) on new and bolder projects. If you're not taking risks, you're not making moves!

Nothing great in life is achieved alone. Especially in business, success isn't a solo act. This character trait is akin to "surrounding yourself with better people." It takes teamwork to make the dream work.

Paul Carrick Brunson is a Professional Matchmaker, personal branding expert, host of #MentorMonday, and author of It's Complicated (But It Doesn't Have to Be).