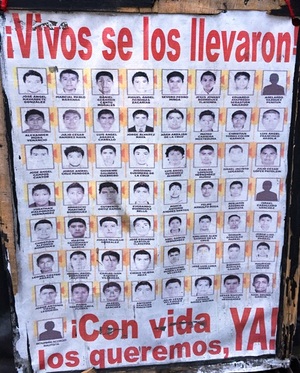 The U.S congressional briefing to be held on May 25th with the Group of Experts tasked with accompanying the case of the 43 disappeared Mexican students could not come at a more crucial time.

The end of this week marks twenty months since the disappearance of the students. On the night of Sept. 26th, 2014, students from the Ayotzinapa rural teachers' college left their homes in the state of Guerrero to commandeer buses to travel to Mexico City to commemorate, ironically, the 1968 student massacre. They were instead the victims of what we now know were a series of coordinated attacks between organized crime, police forces, and military soldiers resulting in six deaths, the injuries of an estimated forty individuals, and the enforced disappearance of 43 students.

Yet, nearly two years after the initial attacks, the case remains far from closed.

The Interdisciplinary Group of Independent Experts (GIEI), operating under an agreement by the Mexican government and Inter-American Commission on Human Rights (IACHR) presented the findings from their second and final report on the Ayotzinapa case in Mexico City on April 24th to an audience of civil society organizations, the general public, and the families of the disappeared students. The Mexican government officials who were invited noticeably never showed up. The experts' report presentation was the bitter end to the frustrating year accompanying the case in Mexico; an ending they didn't ask for but were forced to accept when the Mexican government refused to extend their mandate.

Though their mandate has formally expired, the experts, with support from U.S. and Mexican civil society, will now present their grim findings to U.S. policymakers to expose what has gone wrong in the official investigation with the international community. The disappearance of the 43 students is not just one case that should never happen again. It is an example of the broader, structural weaknesses in Mexico's criminal justice system: the bureaucracy, delays, and re-victimization that thousands undergo on a daily basis in the search for their missing loved ones across Mexico. And for this reason, support from the international community continues to be crucial.

The experts' final report paints a disturbing snapshot of a government that tried to hide the truth at all costs and at the highest levels, including by torturing the majority of the key suspects and tampering with official evidence. More specifically, it offers new evidence to highlight the magnitude of the scale of the attacks against the students and documents a level of coordination between federal, state, and municipal police and members of the military that would have made it impossible for any of these to be unaware of the incidents that evening.

Shedding light on these details was not an easy process. The Experts' time in Mexico was marred by delays and obstacles to access information and media campaigns to discredit their work, as well as attacks against the head of the IACHR, the regional body backing their mandate. Requests to be present to interview the members of the 27th military battalion were never granted. Appeals for international assistance to the U.S. Department of Justice to investigate the role of a fifth bus in heroin trafficking to the city of Chicago were made months too late, leaving it as another, current outstanding piece of the investigation.

Most importantly, the Experts' final report is decisive in stating that there is ample scientific evidence to disprove the Mexican government's "historic truth", its main theory the the students were incinerated at the Cocula trash dump which they have continued to insist on through this past April.

And all this occurred in what the Mexican government's Attorney General has described as "the most exhaustive investigation of its history," in which only one of the student's remains have been identified, and the other victims and families are left without answers almost two years later.

There have already been some welcome reactions to the Experts' final report in the United States, including from the U.S. State Department, the U.S. Ambassador to the United Nations, Samantha Powers, and many of the congressional representatives who are hosting the briefing this week. However, statements like these must be sustained and strengthened in the coming months to hold the Mexican government accountable for addressing the short-term inconsistencies in the case as well as to take concrete actions in the medium and long-term to strengthen the rule of law and the investigation and prosecution of human rights violations in the country.

A crucial next step for the Mexican government will be unveiling the details of the special follow-up mechanism to the case. As a group of organizations from the United States and Latin America called for in a letter to the Mexican Foreign Ministry, information regarding its implementation is urgent. One month has already passed with silence from the Mexican government on this front.

The special follow-up mechanism must include plans for addressing pending questions such as the role of the military, torture allegations, and evidence that has been left out of the official investigation. Consultation mechanisms with civil society organizations and the IACHR should be built in. The proposed laws to address enforced disappearances and torture must include civil society's concerns and be passed before the end of this year. Protections for the human rights defenders who will accompany the families of the missing students in the absence of the Group of Experts must be ensured.

In the past, the United States has evaluated Mexico's steps in advancing the protection of human rights as a part of conditions in the Merida Initiative aid package and taken decisions, as it did last year, to withhold aid based on a lack of progress. The Ayotzinapa case provides many examples of Mexico's current backsliding on human rights that should be critically considered in decisions regarding future aid. The United States should also help support the implementation of concrete steps to strengthen Mexico's criminal justice system as a key part of its partnership moving forward.

Time is of the essence. The families of the disappeared students should not have to wait any longer for the truth. Support and vigilance from the international community, including the United States, to help define a path forward that provides access to justice not just for these families but for the thousands of other victims in Mexico continues to be of utmost importance.