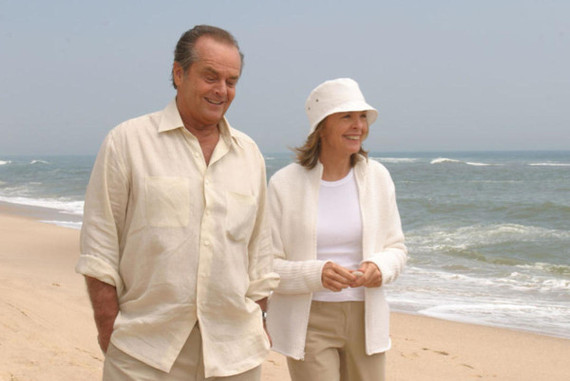 Sex in old age -- or even middle age -- is typically a punch line: it's gross, it's non-existent, it's weird, it's comical, it's "like trying to shoot pool with a rope," as George Burns once said. And though Dr. Ruth continues to fight the good fight, with inspiring self-help books like Sex After 50, she has to compete with gag books like the title Sex After 60, which is blank inside. Tracy Letts writes in August: Osage County: "Women are beautiful when they're young, and not after. Men can still preserve their sex appeal well into old age ... Some men can maintain, if they embrace it ... cragginess, weary masculinity. Women just get old and fat and wrinkly." Gag us with a spoon.

Well, Erica Jong wants to change all this, and she's starting with her new novel, Fear of Dying, which is being billed as a sort of "spiritual sequel" to her classic Fear of Flying, and is about, yes, the zipless f&*k for old people.

"Women were not allowed to have passion at 60," she writes in Fear of Dying. "We were supposed to become grandmothers and retreat into serene sexlessness." (Think: Amy Schumer's Last F*$#able Day.)

Yes, the book is getting some pretty crummy reviews. But who cares! Erica Jong is talking about old people sex, and she's making it sound sexy, and that counts for something. To celebrate this fact, here are twenty quotes about old people sex. We hope these words make you long for some boot-knocking deep into your retirement.

Note: Not all of these quotes are explicitly about sex. There's still such a taboo surrounding this topic -- unless you're joking about Viagra -- that we were forced to select a few quotes that require you to read between the lines. Don't forget your reading glasses...

"Sexual intercourse is kicking death in the ass while singing." -- Charles Bukowski

"Old people they lose their sex life and that's not a good time. That's why they get divorced all the time." -- Snooki

"There is this giant void in the culture about women in that age group as heroines, as romantic beings, as sexual beings and as creative beings, and there's not that void for men. Women don't stop being all those things as their lives continue into those decades." -- Naomi Wolf

"Too many people, when they get old, think that they have to live by the calendar." -- Senator John Glenn, the oldest person to board a U.S. Space Shuttle at age 77
(reading between the lines: your body's best-before date is when you say it is)

"Despite a lifetime of service to the cause of sexual liberation, I have never caught venereal disease, which makes me feel rather like an Arctic explorer who has never had frostbite. "-- 76-year-old feminist writer Germaine Greer

"At age 20, we worry about what others think of us. At age 40, we don't care what they think of us. At age 60, we discover they haven't been thinking of us at all." -- Ann Landers
(reading between the lines: sex gets better when you stop caring what people think!)

"Grow old along with me! The best is yet to be." -- Robert Browning

"If I ever get to 100, I'd want to be filled with wonder and wild, adolescent, wide-eyed interest in newness. So let's keep the flame burning. Let's stop thinking everyone over 29, or 49, has to be reinforced by concrete." -- British science fiction writer Tanith Lee

"Older women are best because they always think they may be doing it for the last time." -- Ian Fleming

"Old age ought to be, and essentially is a manifestation of what is hidden in the depths of man's nature. It might be, it should be, not an exhibition of crackling impotence and gloomy decay, but the very crown and ripening of life -- the symbol of maturity, not of dissolution." -- Nineteenth century American preacher E. H. Chapin
(reading between the lines: oh, come on! how else should you celebrate the crown and ripening of life?!)

"Sex and golf are the two things you can enjoy even if you're not good at them." -- Kevin Costner

"You don't appreciate a lot of stuff in school until you get older. Little things like being spanked every day by a middle-aged woman." -- Comedian Emo Phillips

"Aging is not lost youth but a new stage of opportunity and strength." -- Betty Friedan

"Life without sex might be safer but it would be unbearably dull. It is the sex instinct which makes women seem beautiful, which they are once in a blue moon, and men seem wise and brave, which they never are at all. Throttle it, denaturalize it, take it away, and human existence would be reduced to the prosaic, laborious, boresome, imbecile level of life in an anthill." -- Henry Louis Mencken

"The tragedy of sexual intercourse is the perpetual virginity of the soul." -- William B. Yeats

"You have to know that an older man cannot hang from a chandelier." -- Dr. Ruth

"[As people age,] the orgasmic response is less intense, and the ejaculatory response for men is less intense. Make the best of what you have. Don't tell me it used to be like this. I know all that. Make the best of what you can do now. ... If you have a washing machine in your apartment, do that together and see if the vibrations of the laundry machine and dryer can do something for your sexual arousal." -- Dr. Ruth

"I finally know the difference between pleasing and loving, obeying and respecting. It has taken me so many years to be okay with being different, and with being this alive, this intense." -- Eve Ensler

"Sex got me into trouble from the age of fifteen: I'm hoping that by the time I'm seventy I'll straighten it out." -- Harold Robbins