Today's the sixth annual Spread the Word to End the Word Day, dedicated to raising awareness about an insulting word -- and respect for people with intellectual disability. Started by the Special Olympics, the campaign is on the surface about why the word "retard" perpetuates negative stereotypes of people with ID but at heart, it's about consideration. 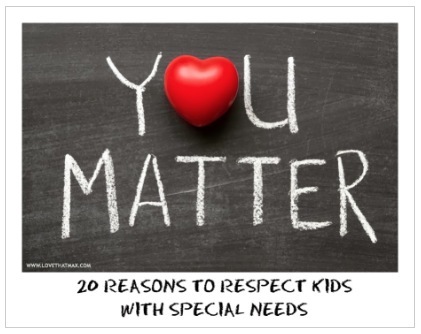 These are reasons why kids like mine with special needs deserve your respect:

1. Because he is a kid. He may act differently, walk differently or think differently than most children do but at heart he is a child like any other. He matters. He has worth. He has potential.

2. Because, really, it's so simple to give my child respect -- and it's not about handling him with kid gloves. Talk to him, not over him. Look him in the eye. Presume he understands. See his abilities, not only his disabilities. Treat him as you would want your child to be treated. Accept, don't just tolerate.

3. Because no matter what a child's diagnosis -- Down syndrome, cerebral palsy, autism -- he has a lot of obstacles to overcome in this world, and your respect can help fuel his confidence.

4. Because I know it can be hard not to stare and sure, maybe my kid doesn't notice. But one of these days he will and it will only make him feel more alienated.

5. Because teaching your kids to accept and respect those with special needs will open their minds, expand their understanding of humanity and help them grow up to be Better People.

6. Because it's 2014, and it's time people with intellectual disability stopped being treated as inferior human beings.

7. Because avoiding demeaning language is another way to respect people with intellectual disability. This isn't about curbing freedom of speech, political correctness, extreme uptightness or go find something else to worry about what's the big deal -- it's about decency, consideration and, wait for it, respect. Would you call a person you love a loser? No? (I hope you said "no.") Well, when you jokingly use the words "retard," "retarded" or "'tard" as synonyms for loser, pathetic, clueless or stupid, you perpetuate the perception that children and adults with intellectual disability are pathetic clueless stupid losers. Basically, you slam an entire population... even if you don't mean to.

8. Because even if you don't have any kids with intellectual disability in your life, you can choose words that won't make ones who have it look bad.

10. Because haters are gonna hate but the rest of us can respect.

11. Because "To be one, to be united, is a great thing. But to respect the right to be different is even greater." -Bono

12. Because we parents of kids with special needs will do anything within our powers to help our children, whether it's getting them a ton of therapy, trying experimental treatments, working overtime to pay for it all -- and asking for your respect.

13. Because you don't have to download the app, hit "click to buy" or get on a waiting list for Apple's next edition. Respect: always free, never gets old.

14. Because it's so not cool to use that word. And people are publicly acknowledging it, as did New York Times Ethicist columnist Chuck Klosterman when Keri Wagner-Peck, mom to a boy with Down syndrome, called him on his repeated usage of it. His response: "It was immature, hurtful and thoughtless."

16. Because don't just take it from me: Read what this Special Olympics athlete had to say about that word. And how it felt to one dad of a son with autism when their family was in a restaurant and he overheard a woman say, when the waiter asked how they were doing, "Except for the retard in the next booth ruining things by making noise, everything's fine."

17. Because our kids should be at that restaurant, on that plane flight, in that place of worship, or anywhere and everywhere in society. They may be struggling to keep it together, they may cause disturbances, but you need to respect their right to be there.

18. Because maybe you have no idea what it's like to love someone who is cognitively impaired, but if you did, you might have written this.

20. Because the fact that parents like me are making this plea tells you a little something about our concerns for our children's future. Please, help create a more inclusive, welcoming world for them.

This post originally appeared on Love That Max. More from Ellen Seidman:

Quiz: Do you get why this word hurts so much?

More:
r-wordParentsspread the word to end the wordkids with special needsparents-moms
Newsletter Sign Up
Raise the kind of person you'd like to know
Subscribe to our parenting newsletter.
Successfully Subscribed!
Realness delivered to your inbox