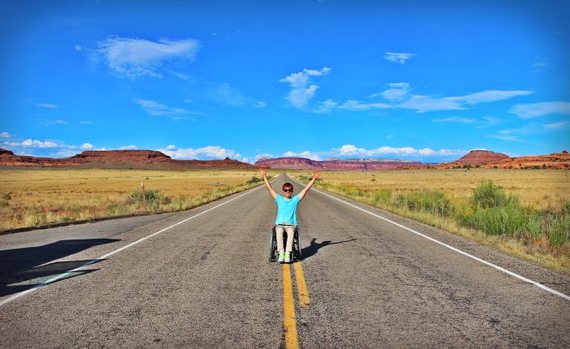 Is your building accessible? Where is the accessible entrance to your building? Will my wheelchair fit in your bathroom? Where's your elevator to the second floor?

People who use wheelchairs know these questions all too well. They look for the elevator, ramp, even to see if the washroom could fit their chair. This is what two Harvard students did for their summer in hopes of creating a wheelchair accessible travel guide book for the United States.

Harvard students Kunho Kim '17 and Brad Riew '17, never thought that taking a simple trip across the United States would begin their journey in opening new possibilities for people with disabilities.

Kim had big dreams to travel around the world, and as a South Korean native, thought that a cross-country trip in his wheelchair would not be a hassle, especially when it came to accessibility. Paralyzed from a skiing accident in 2010, Kim always dreamed about experiencing different parts of the United States during summer and winter breaks. Riew, Kim's classmate and friend, also shared this dream. Because of the Americans with Disabilities Act, Kim assumed that a travel guide regarding wheelchair accessibility for his trip would be easy to find. Needless to say he was a bit shocked when he struggled to find a standard travel guide, book, or even reviews of tourist/public places that he hoped were wheelchair accessible. The lack of information around accessibility soon became very real for Kim and Riew, "We really felt there was this space where there was a need that was not being met, and that we could fill it."

Then came the process Riew and Kim planned their detailed trip- what states and cities to visit. They created an accessibility evaluation form usable on their phones, and raised funds in hopes that the data collected would be published into a book titled- 20 States on Wheels. On July 7, 2014 Kim and Riew, along with their two friends, You-Myeong Kim and Cynthia Cheung, began their two-month accessibility-evaluation trip from San Francisco to Boston, hitting Yosemite National Park, Los Angeles, St. Louis, Detroit, Niagara Falls, Washington D.C. and more. The team was ready to go in their Hertz car equipped with hand controls and their self-proclaimed project: 20 States on Wheels.

None of the team suspected, however, they would be breaking new ground when documenting fully accessible tourist locations.

Throughout the journey, Riew and Kim realized that accessibility standards differed by state. For instance, when it came to renting a hotel room accessibility meant something different for each property.

From the Harvard Gazette, "We asked a couple of times, 'Do you have a wheelchair-accessible bathroom?' But once we got into the hotel, either they had a tub, or it wasn't accessible and totally different from what we expected." You-Myeong Kim also mentioned, "A lot of them aren't practical. Sometimes they'll be missing a bench, sometimes railings would be far from the hand control, sometimes the shower controls would be so far they would be impossible" to reach. 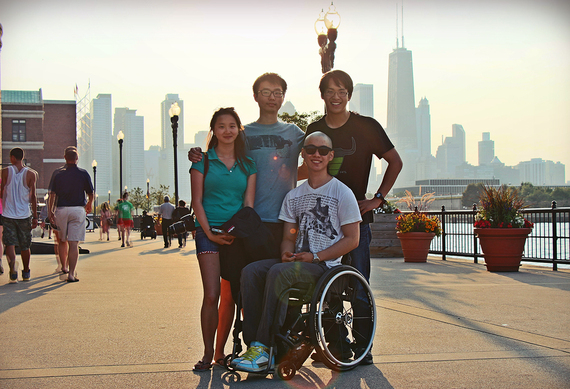 20 States on Wheels Team in Chicago courtesy of Brad Riew

In addition handicap placards had different meanings in various states. In some areas a placard meant free parking while others had special fees. To verify, the team checked with each state's DMV regarding the access behind the placard.

Although their trip came to an end on August 28, 2014, Kim and Riew are still full throttle in making 20 States on Wheels a travel guide book. A manuscript of 20 States on Wheels is currently in draft form and is expected to be published by the end of 2015.

The team documented from parking, accessible taxi companies, companies that rent accessible vans, to navigating public transit. The book also includes reviews of tourist attractions, building entrances, and locations of accessible restrooms. The team also compiled a list of hotels within tourist areas, including distance ratios, and descriptive information on accessible bathrooms. Starting with pre-trip preparations for wheelchair users such as packing a wheelchair pump and pressure-relief cushion for the road to renting a car with hand controls, Kim and Riew intend to break barriers on how the travel industry views people with disabilities. That's why their goal is to leave no questions unanswered for a person in a wheelchair who is planning to travel across the United States. The two agreed to make 20 States on Wheels as free and accessible to everyone and will have a downloadable option on their site debuting October 25. "We want to make this as affordable as possible for people with disabilities so we can encourage them to get out and experience the United States" said Riew.

Kim and Riew hope that 20 States on Wheels will help break the stigma around travel and wheelchair accessibility. In the beginning of their journey, the two students were shocked at how little information was available for wheelchair users and now these social entrepreneurs wholeheartedly believe that accessible travel can be universal for all.

Kim perfectly captures the essence of accessible travel, "There is a dangerous idea about wheelchair users: that living in a wheelchair is tragic, because a person in a wheelchair cannot enjoy life as fully as an able-bodied person. A person in a wheelchair experiences life no less fully than any other person, and finds fulfillment in the same places as anyone else: in meaningful employment, in loving relationships, and in pursuing one's dreams--including, for some people, traveling."