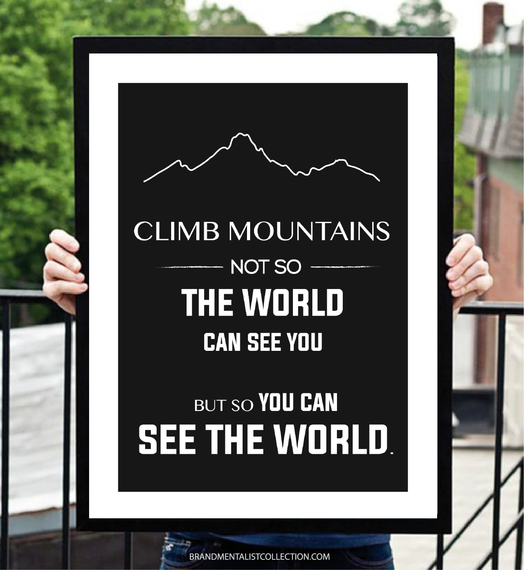 1. They don't define success in a monetary term.
Most successful people define success as happiness, having a peace of mind, or helping others. They see money as something that brings them comfort and opens doors of opportunities. They realize that money can't buy them happiness.

2. They don't start their days without plans.
Successful people know that in order to stay on top of work and become successful, they need to be disciplined and be smart with how they manage their time. In order to do this, they plan their days ahead, putting together a to-do list at the start of the day -- what needs to be done and in what order. Not only are they going to make sure that they don't miss out on any important task or meeting, but also optimize their time for the optimal performance.

3. They don't define "perfection" as their end goal.
To successful people, striving for perfection is rather a waste of energy and time because you would be spending your time looking for mistakes and faults to fix. Instead, you should strive for "growth." From one point to another, successful people achieve each goal with growth in mind.

4. They don't surround themselves with negative people.
Pessimistic people, people who whinge and complain, people who procrastinate, and people who find excuses for everything -- these are the kinds of people that successful people don't surround themselves with. Because the more you hang around these people, the more negative energy you receive. Instead, successful people hang around positive people, driven people, and people inspire them.

5. They don't perceive difficulties as problems.
When successful people face a difficulty or an obstacle, they see it as another challenging issue that they need to solve like any other obstacles they've gone through in the past. They believe that these experiences will only make them smarter and stronger.

6. They don't let failure bring them down.
Successful people see failure as a part of growth and an opportunity to learn and make a progress. They believe that no matter how many times they fail, they will get back up again stronger than before.

7. They don't let problems bring them down.
If you let your life get weighed down by problems, you're not going to be anything but stressed. And that is the way to having more problems in life.

When facing a problem, instead of focusing on the problem, you should focus on your action and what you do to make the situation better. By shifting your focus like this, you will feel better and find an even better way to solve the problem.

11. They don't ignore those they love.
No matter how much work is important to successful people, it is not as important as the people they love -- family, partner, and their own selves. True success starts from within. The love and support from the loved ones are significant and can be tremendously helpful in making someone succeed.

12. They don't forget to have fun.
Work can be tiring. Successful people know that work without play is meaningless. Work has to be enjoyable. And the way to achieving that is to do what they love and to have to work-life balance even though it's hard at time.

Successful people know that it is important to get enough sleep as well as to take time to relax and play in order to be able to perform at their best.

13. They don't overlook their health.
Truly successful people know that good health brings in a clear head, a motivated mind, and a fully charged body, which are critical in producing great work. Everything in life starts with good health. And everything else ends when health collides.

14. They don't set vague life goals.
Successful people know "exactly" what they what in life. They know what their dreams are and they are determined to achieve them.

When you are clear with what you want in life, coming up with plans and a roadmap to achieving that is easy. All you need to do is to follow through, never give up, and never get distracted. By having a clear life goal, you are able to evaluate where you are in life and how far you are from your goal.

In short, by having a goal and a dream, you're half way there.

15. They don't just talk the talk. They walk the walk.
Successful people don't just talk -- whether it's about ideas or criticize others. They make sure things get done and what they said they'd do will happen. They execute. They implement. They are reliable and trustworthy.

16. They don't let themselves become victims.
Successful people don't let themselves become victims of other people's actions. They are smart enough to get away from bad people and bad situations. They don't hold grudges and don't look to take revenge. They know that they only way for them to be happy is to let go and move on -- so that they can let better things in life come in.

17. They don't get stuck in the past.
Successful people don't let themselves get weighed down by their past. If you live in your past, you're never going to be happy in the present especially if you have a painful past.
Be mindful and live in the moment.

18. They don't resist change.
Plans, strategies, and tactics -- all of these can change over time. Successful people accept them without frustration and resistance. They adjust and adapt because they believe that there is no fixed route to success.

19. They don't ever stop learning.
No matter how old they get, successful people are always learning because they believe that no one knows everything. Inspiration can arise anywhere, anytime, from anyone. Therefore, don't act like a glass full of water. Instead, act like a glass half full so that you can always have room to learn something new.

20. They don't end their days without feeling thankful.
No matter big or small, successful people feel thankful for things in their lives and in their everyday lives. They show appreciation for those who have helped them. They thank people who support them and stand besides them. They feel thankful for what they have in their lives, rather than looking at what they don't have.

Successful people simply feel blessed and thankful for being alive and waking up to the people they love to do the things they love -- and that's the secret to starting their days with positive energy and a peace of mind.

Founder & CEO of The Happiness Planner