September 22 marked 20 years since Friends premiered on NBC. During the show's decade on the air, we witnessed plenty of weddings (and Ross was responsible for "just like half of that"). The lessons learned are just as relevant today. Here, the top 20:

1. Don't over think the proposal.
Chandler tried to throw Monica off guard by pretending he hated marriage, and he almost lost her to ex-boyfriend Richard. And Mike got so caught up in planning a perfect (albeit cliché) proposal for Phoebe -- from using the big screen at a game to hiding the ring in a slice of cake in a restaurant -- that he lost track of what really mattered. Eventually, Monica proposed to Chandler (or at least tried to, until she was crying too much to get the words out -- "There's a reason why girls don't do this!"), and Mike realized a simple proposal was all he needed: "I keep trying to propose in these stupid ways, and all I want to do is tell you that I love you, and I want to spend the rest of my life with you."

2. But do make sure to actually ask the person to marry you.
Friends taught us that just because someone is down on one knee holding a ring, it doesn't mean that he's proposing. 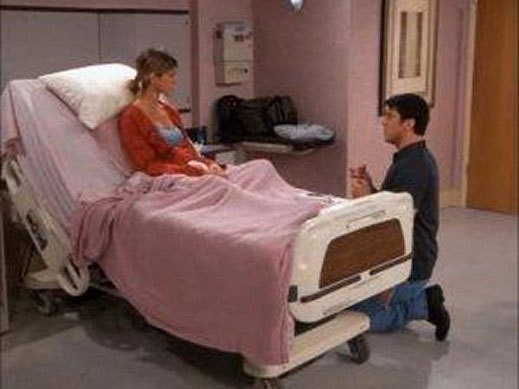 4. If your bridesmaids do throw you a shower, give them a clue about what you want.
Otherwise, you may end up with Danny Devito wearing a child's Halloween costume as your last-minute stripper. Bride-to-be Phoebe wasn't exactly pleased that her big send-off into married life was an elegant tea party -- she wanted "pee-pees flying about" -- so Monica and Rachel scrambled to find a stripper mid-party. This was the only guy available:

5. Make sure you're on the same page about bachelor and bachelorette parties.
Monica and Chandler decided to skip the "silly tradition," but the girls later surprised Monica with a bachelorette party. Joey wasn't too pleased when he found out he could've planned a real bachelor party for Chandler, and the post-wedding "bachelor" party didn't exacly go smoothly. 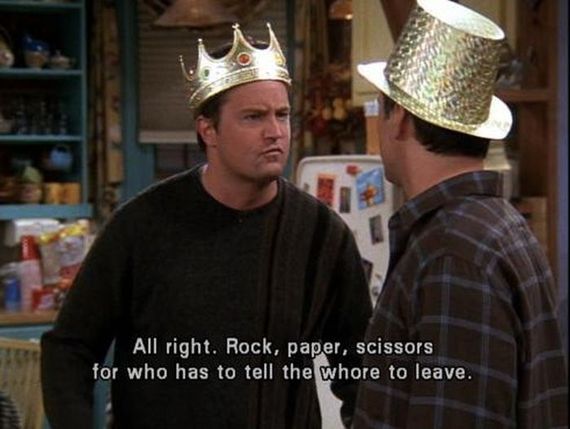 6. It's okay to have two maids of honor or best men.
While having Rachel and Phoebe duke it out to be Monica's maid of honor made for good TV, there's no reason to do this in real life. It's perfectly acceptable to ask two people to share the role, like Ross eventually did for his (ill-fated) wedding to Emily.

7. Think carefully before hiring a friend.
Your super-organized, most Monica-like friend may seem like a dream wedding planner, but if she doesn't understand your wedding vision, you may have to risk your friendship and fire her.

8. It's not all about the dress.
Yes, your dress is important. But when Monica battled with another bride for her dream dress at a warehouse sale, the other bride retaliated by stealing the band Chandler really wanted. After hearing how much the band meant to Chandler, Monica gave up the gown to get the band back. 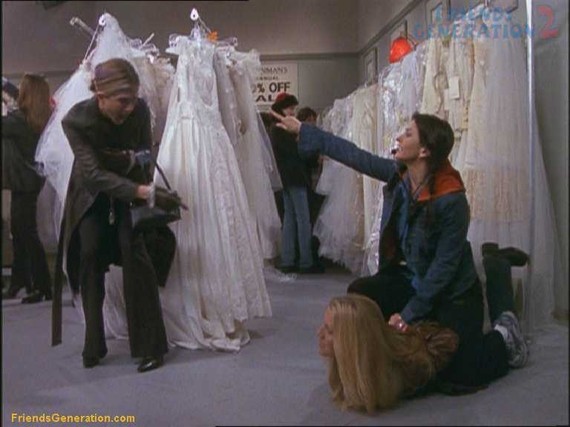 9. Don't make your bridesmaids wear an ugly dress.
We have to believe that Rachel's Little Bo Peep dress for Barry and Mindy's wedding was the groom's way of paying Rachel back for running out on their wedding. 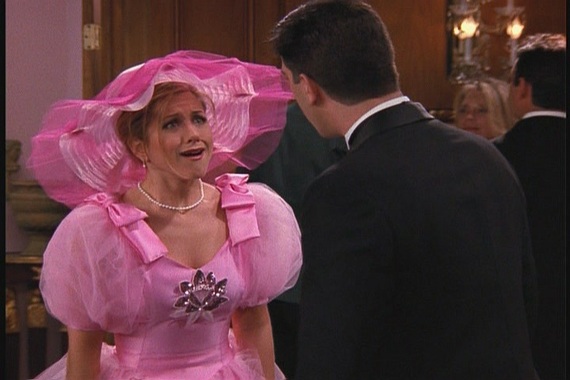 10. Break in your dancing shoes.
Chandler secretly took dancing lessons so that he wouldn't look like a "clumsy idiot" on their wedding day, but the minute he stepped on the dance floor in his new shoes, he slipped and nearly fell. Take your shoes for a test drive before the big day! 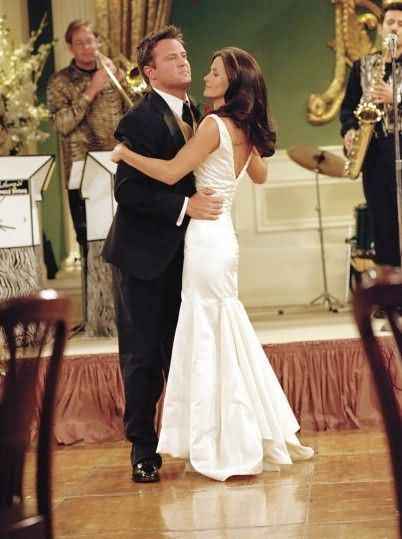 11. It's rarely ever a good idea to get married while drunk in Vegas.
One drunken night with Rachel led to Ross's third divorce because, contrary to Phoebe's belief, if you're married in Vegas, you're married everywhere.

12. If you're planning a destination wedding, be considerate of your guests.
When Emily found out that their venue was being torn down, Monica suggested that she and Ross postpone the wedding until they can find another suitable location -- never mind the fact that Ross's friends and family had already traveled to England for the big day.

Related: Everything You Need to Know About Destination Weddings

13. Make sure you're on the same page about your wedding plans before you start spending (or donating) any money.
Phoebe and Mike decided they didn't want a big wedding, so they donated the money they would've spent to charity. Then Phoebe decided she did want the wedding, and she asked for the money back. Think hard about what you actually want to do before you start throwing money around. 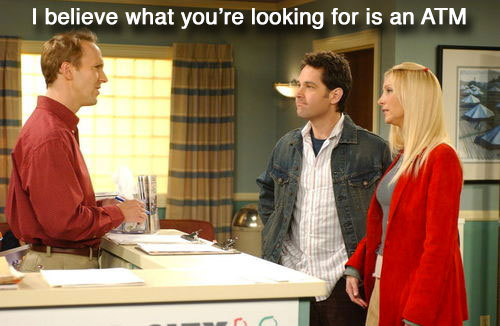 14. Don't assume your parents are paying.
Soon after Chandler proposed, Monica told her parents they'd need to make a "big withdrawal from the Monica wedding fund" soon. That's when she learned that "the wedding fund" is now called "the beach house." Her parents explained, "We just assumed if you got married after you turned 30, you'd pay for it yourself."

15. Figure out who's paying for what before the big day.
A tip for the groom's parents: don't offer to split the bill in half without knowing exactly what you're playing for. At Ross and Emily's rehearsal dinner, Ross's dad was hit with an itemized list of wedding expenses that included reasonable things, like flowers and liquor, followed by a bunch of upgrades to Emily's parents' house (where the reception took place), like re-carpeting the first floor, building a new guest bath, landscaping, installing wine cellar and gazebo, and more.

Related: Who Pays for What: The Traditional Breakdown

16. If you're a guest, don't mess with the couple's seating chart.
When Ross met Mona at Monica and Chandler's wedding, he tried to switch his table so that he could sit with her. But he thought her escort card said 6 when it really said 9, and he ended up sitting at the kids' table and dancing with them all night. 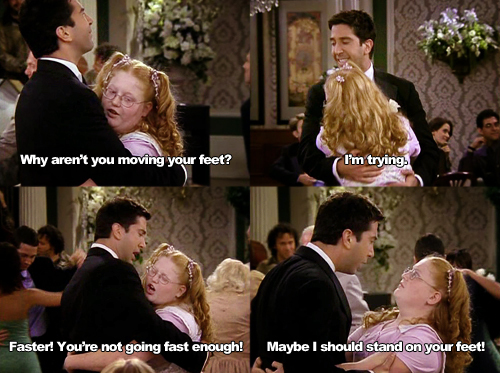 17. It's normal to feel a little depressed after the wedding is over.
After months and months of planning, the post-wedding blues can strike any bride. Monica built up the wedding so much that she felt such a sense of loss when it ended. Here are some tips on how to deal ► 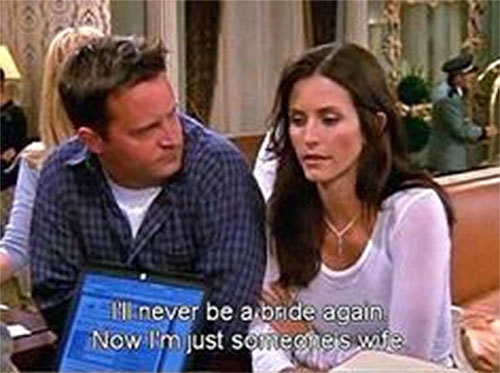 18. Throwing a winter wedding? Have a back-up plan.
A blizzard hit New York City on the day of Phoebe and Mike's wedding, making it impossible for their vendors to make it. Instead of postponing, they decided to follow maid of honor Rachel's suggestion and get married in the street right outside Central Perk -- "You couldn't ask for a more romantic setting. This could be the simple wedding you've always wanted!" Monica organized everything, Joey stepped up as officiant, Chandler walked Phoebe down the aisle, and Ross got to carry Mike's tiny dog (a groomsman) down the aisle through the snow. 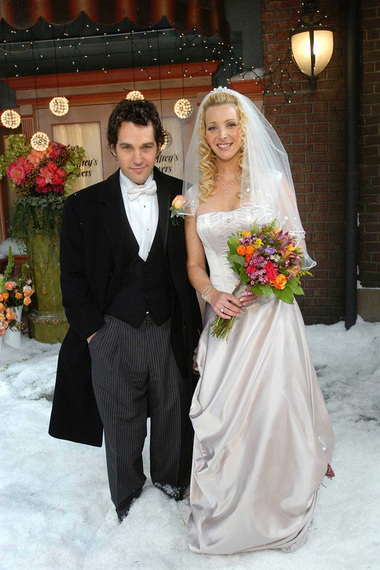 19. Think carefully before inviting an ex.
Sometimes, this works out fine -- Ross even walked ex-wife Carol down the aisle at her wedding to Susan. But sometimes, it's more trouble than it's worth. With Rachel as a bridesmaid at Barry and Mindy's wedding, it became all about Barry and Rachel's failed wedding instead of about the couple. And we all know what happened when Rachel showed up as Ross's wedding to Emily. Which leads us to...

20. Say the right name.
Okay, this is fairly obvious. But will anyone ever forget when Ross said Rachel?

By Kristen Klein for Bridal Guide