When Charles Eliasch was two-years-old, his mother took him to Mozart's Don Giovanni at the Vienna Opera House. Thinking he'd be fed up by the intermission, she started to exit, but the opera-loving toddler threw a huge tantrum insisting they stay to watch the final act. Even at two, Eliasch knew he had a special calling.

Eighteeen years later, Opera baritone, Eliasch is about to receive the ultimate Easter egg in the form of a debut at Carnegie Hall on Sunday, March 31. His performance will be a mixture of opera and oratorios with the main theme being love in all of its many forms. Admittedly, "in awe" of singing in the legendary New York space, his greatest dream is to sing at The Royal Opera House in Covent Garden in his native London. 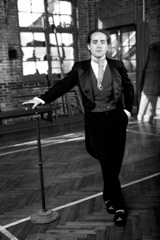 Music has always been in my family on both sides. My mother (U.K. filmmaker Amanda Eliasch) sung in choirs, and her mother (Caroline Brown) was an opera singer. She died about five years ago, which was dreadful because she was one of those frank teachers who recognized that I had the foundation for opera and would tell me what I needed to do. She wasn't a grandmother who would just say nice things because I was her grandson.

While partying and having fun is a temptation for most 20-year-olds, Eliasch, who began vocal training at age thirteen, and recently graduated from New York's Mannes College of Music with a focus in voice, is disciplined in his commitment to a career in opera. Eliasch:

Training your voice for opera requires all of your focus and energy because it's very specific in technique. Opera is something I love so much that I am willing to put this first and foremost. Alcohol and cigarettes will be the death of your voice if you're a professional singer. One glass of wine will affect how I sing the next day. It's like you're taming nature. You have to tame your voice to control it to do this beautiful thing. The great singers could sing for decades like Placido Domingo who started singing at nineteen, and he's still doing it because he knew how to nurture and care for his instrument. 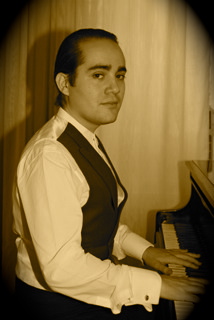 Eliasch's wardrobe and dramatic long hair recalls the Victorian era, or even earlier to Lord Byron's day. When asked about this, he responds:

When I was little I used to daydream that I was walking down the street in a different century. A car would pass me, and I'd imagine it to be a horse and carriage. I'm obsessed with the 18th Century, and the court of Louis the 14th and Marie Antoinette. I went to Harrows School where Lord Byron went. What's weird is I don't feel like I am in this time. I feel trapped in this modern century, but I belong somewhere in a past century.

Though he has yet to record a debut CD, he is, in the meantime, readying himself for Carnegie Hall, and subsequent performances in Europe. He will be accompanied by Mikayla Sager and Sofia Dimitrova in duets, and Martin Yazdzik on piano. 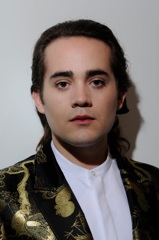 Opera brings together all forms of art. Music, singing, drama, art and design, acting, fashion, dance, comedy and when you bring this all together you should really feel something. It only makes sense that the word 'opera' is Latin for "a show." Jessye Norman says "Music is the language of the universe," and I totally believe that. Whether it is people whistling, the hum of wind or the beat of machines or birds twittering in the park. I read humans were singing before they were speaking. Music is in us and all around us everywhere!