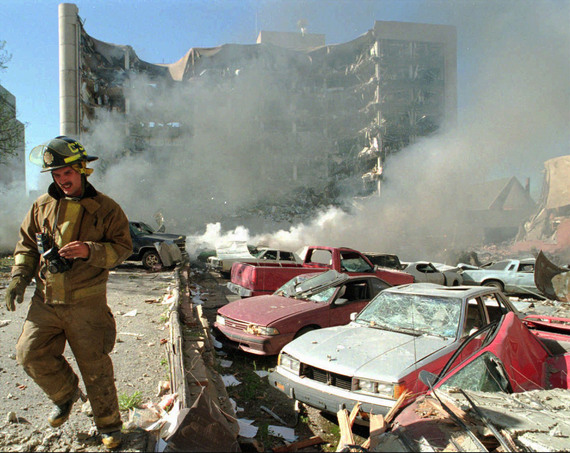 It's been 20 years since the horrific bombing of the Alfred P. Murrah Federal Building in Oklahoma City, and much has been done since then to increase security and safety around federal buildings.

Sadly, there has been no such progress in eliminating the types of anti-government sentiments that drove domestic terrorists Timothy McVeigh and Terry Nichols to target federal government employees on that fateful day.

One hundred sixty-eight people died in the Oklahoma City bombing, including 99 who worked for the federal government. Thankfully we have not a major attack targeting federal employees or facilities since then. But there has been a concerning surge in violent attacks against federal employees in recent years -- some of which have proven fatal.

In November 2013 a shooting at Los Angeles International Airport claimed the life of TSA Officer Gerardo Hernandez and injured two other TSA officers and a civilian teacher. Officer Hernandez was shot 12 times during the attack. A note found on Paul Ciancia, the sole suspect in the shootings, said he wanted to kill TSA agents and called them pigs. This incident represents the culmination of daily assaults -- physical and verbal -- endured by TSA employees at airports across the country.

Three and a half years earlier, Andrew Stack deliberately flew his single-engine aircraft into a four-story office complex in Austin, Texas, that housed an IRS field office. The crash killed IRS manager Vernon Hunter and injured 13 other people. The morning of the crash, Stack posted a suicide note on his website railing against the government and specifically mentioning a long-running feud with "Big Brother IRS."

How did Ciancia and Stack develop such deep-seated hatred for government employees? Perhaps it was from turning on the TV or browsing the Internet, where any number of anti-government politicians and commentators have openly vilified public servants.

There is a difference between having a civil discussion on the role and function of government agencies and blasting federal workers as "jack-booted thugs" for simply doing their jobs, as former congressman and presidential candidate Ron Paul did in 2011, or calling for "jihad" against the TSA, as political columnist Jonah Goldberg did in 2011.

Public servants are hardworking, upstanding citizens who are proud to work for their country and deliver the public goods Americans rely on, whether it's keeping terrorists off planes, providing quality medical care to military veterans and their families, ensuring that seniors get their Social Security benefits on time, keeping our food supply safe to eat, or safeguarding the U.S. borders.

The lessons from the Oklahoma City bombing are as important today as they were 20 years ago: Words matter. Fortifying our public buildings only will do so much to protect the people inside. We all must fortify our hearts and minds against the hollow delusions of hatred and return to a truly civil discourse about our government and its employees.

After all, government is just another name for what we choose to do together.