Many years ago, my wife's youngest brother died from Sudden Infant Death Syndrome (SIDS). That tragedy deeply affected her family and her personally. It is part of the reason she became a grief counselor, to help others struggling with loss.

A couple of years ago when our grandson was born, I was grateful that the national Safe to Sleep (formerly Back to Sleep) campaign, with its key message of placing babies to sleep on their backs to reduce the risk of SIDS, had become common practice. Even though there is no known way to completely prevent SIDS, the campaign messages were reassuring -- there were things we could do to help protect our grandson.

Knowledge about SIDS has come a long way in the past 20 years. We've discovered many ways to reduce the risk of SIDS -- primary among them placing babies to sleep on their backs. 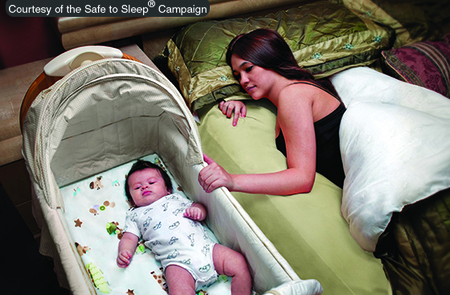 While SIDS numbers are headed in the right direction, we need only look at the latest infant mortality statistics from the Centers for Disease Control and Prevention to know that we have much more to do. The CDC reports that nearly 24,000 infants died in the United States in 2011 and, of those deaths, more than 3,400 were from SIDS and other sleep-related deaths. Of particular concern, the rates of those other sleep-related infant deaths -- such as accidental suffocation -- have increased as SIDS rates have decreased. These statistics reinforced our decision to expand campaign messages to include reducing the risk of other sleep-related causes of infant death.

Although we may not be able to prevent it always, we do know how to reduce the risk of SIDS. Probing for answers about infant deaths has been a primary goal of the Eunice Kennedy Shriver National Institute of Child Health and Human Development since the Institute was founded in 1962. Passage of the SIDS Act in 1974 reaffirmed this goal with regard to SIDS, directing our Institute to take the lead on federal SIDS research. We now know that curbing the risk of SIDS and other sleep-related causes of infant death involves more than the back sleeping position -- the overall sleep environment matters too.

Research findings led one of our key collaborators, the American Academy of Pediatrics, to develop safe infant sleep recommendations. These recommendations form the basis for the Safe to Sleep campaign messages:

Safe to Sleep outreach efforts aim to spread safe infant sleep messages not only to mothers and fathers, but also -- with renewed vigor -- to grandparents, teen babysitters, and other caregivers.

We also have focused outreach efforts in the populations at highest risk. The infant mortality rate, and specifically from SIDS and other sleep-related causes, is high among African American infants as well as in American Indian/Alaska Native communities, so we have worked with these communities to create tailored messages that resonate with these audiences.

I am heartened by the diligence and productivity of our scientific and outreach efforts over the past 20 years. Still, thousands of people become first-time mothers, fathers, and grandparents every day -- and they need to hear these messages. So we will continue our research and outreach efforts, working hard to reduce the rate of SIDS and other sleep-related causes of infant death among all populations, and to reduce the number of families these tragedies affect.

If you'd like to help spread the word about safe infant sleep, visit the Safe to Sleep website, safetosleep.nichd.nih.gov, for free publications and other resource materials.

We acknowledge the substantial contributions of the following Safe to Sleep campaign collaborators in spreading safe infant sleep messages:

More:
infant healthamerican academy of pediatricsSIDsinfantsprevention
Newsletter Sign Up
Raise the kind of person you'd like to know
Subscribe to our parenting newsletter.
Successfully Subscribed!
Realness delivered to your inbox