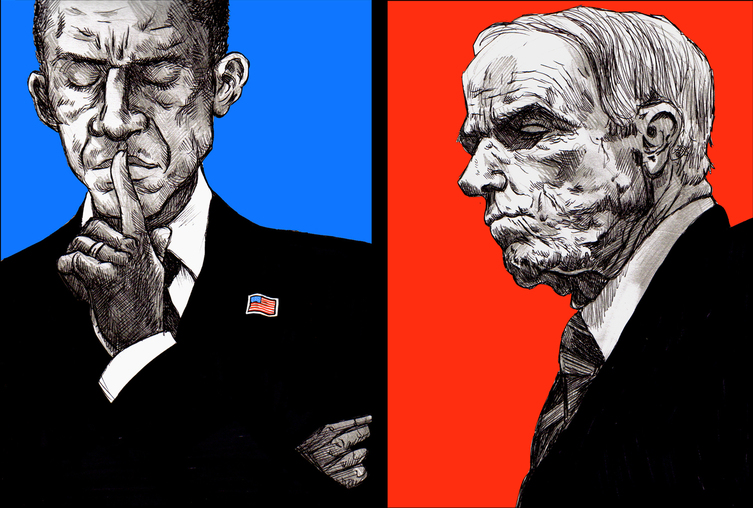 It seems like it happened just a few months ago.

Barack Obama and John McCain in the final stretch, Election Night 2008, and I was staying up to watch, despite the fact that I was in Oxford, England, and that meant facing the twilight and drinking a lot of tea.

McCain had been trailing for a while now, and in the last few weeks had already seemed to give up in his heart. The fire was raging in his final week of campaigning, but more in a "last hurrah" kind of a way, and the news was already reporting the internal recriminations and eating of young that happens when a campaign knows it's going to lose... and throughout of all this, a wonderful tension, a buzz from everyone, even my friends in England, sensing that the first African-American Commander in Chief might walk onto the stage.

The word for the election was Hope, and when the morning broke it would be a wonderful day. Fun to contemplate, if only for its intrinsic symbolism.

And not only was I up late to watch this momentous occasion unfurl, but today was also a work day.

All day in fact. My newspaper would need a Trumble cartoon for the next day, and this one was important. The first cartoon of the new era. And even though I was relatively young and inexperienced (at 26, even now I am still no David Lowe) I was thrilled to be able to contribute to the commentary on what would prove to be a historic watershed in the cultural landscape.

After all, this was one of the reasons I had been so excited to get my job at the newspaper that year, the chance to cover something like this. To lend my stamp to Page 8, so that 8 million readers could flip to it, smile for a moment, then read on. That was cool to me, on a day like this. And days like this come about not that often.

But it wasn't as simple as that.

Like many of my English friends, I watched a lot of West Wing... and remember that episode in Season 7 when it's election night? All through the episode, the speechwriter is tasked with writing two speeches, one if the candidates wins and one if the candidates loses. Only the number of speeches end up multiplying exponentially. They need one if he loses electorally, but wins the popular vote. Or wins the popular vote, but loses the electoral college. Or wins but not by much, or loses but not by much, or if it's too close to call... And by the end of the episode the beleaguered speechwriter has 10 speeches to write and his head is about to explode.

Well, I had a much much smaller version of that dilemma, because cartoons have to be done incredibly fast, such is the turnaround for the UK's number one newspaper, and so I had to make sure I was covered for every eventuality. So the day was like an amusing, if bewildering odyssey through a couple of parallel election day universes.... and through sketches and drafts I found myself drawing up different gags for different destinies. 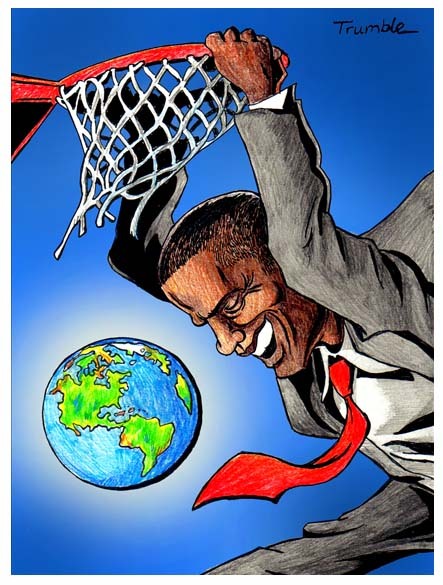 2) One if McCain somehow managed to edge his way past in the final hurdle.... 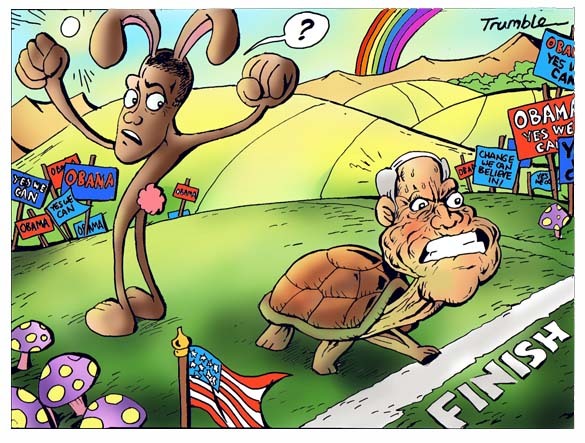 3) One if McCain won, and by a ridiculously last-minute margin.... 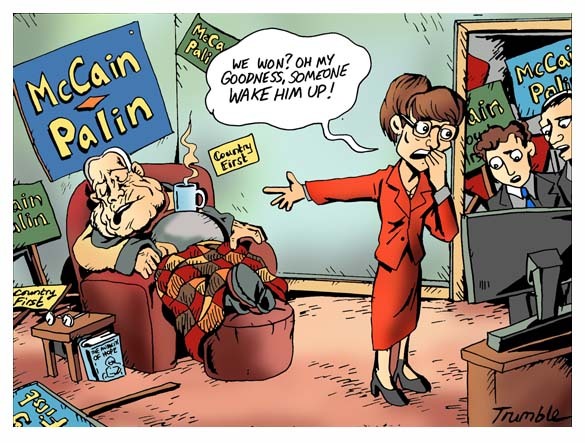 4) And finally one if it was simply too close to call... 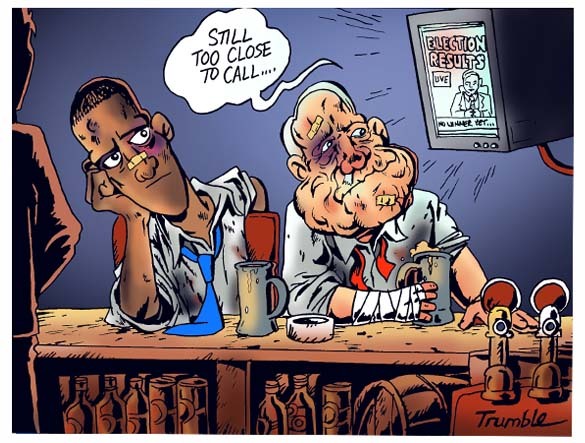 But ultimately, it ended up being Option 5: History made. 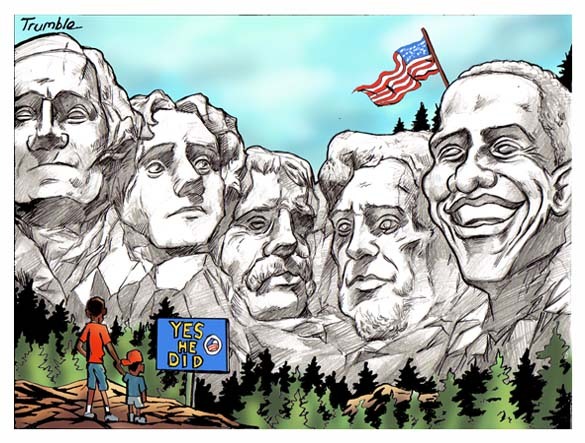 Of all the cartoons featured here, only the last one saw print.

That is the brilliance/tragedy of cartooning, that the readers don't always get to see all the different evolutions of an idea, the left turns and random tangents, or the frustration and agony that leads to epiphany. But it is fun too, as the artist, to have these behind-the-scenes galleries.

In this case, I can look back over these images and remind myself exactly how I was feeling on that night four years ago, how the wheels in my brain were turning, and what I was experiencing all those miles and miles away from America as it reached another tipping point.

Which leads me to now, to this election, to this tipping point.

And this time, well... the journey is even more frustrating. As epic and historic as Obama's last rodeo was, it was not a close race, at least, not anywhere near as close as this one is, and this time there is no safety in characterizing the opponent as old and tired, out of touch or lagging behind. Romney is no tortoise, and Obama isn't jumping around in premature victory. Both candidates will be up late into the night, desperately waiting for the results, as will the voters. No one will be falling asleep after taking their lithium. No one will be certain.

In many ways the cartoon that best describes this race is the one that's too close to call, which was drawn just in case last time, but this time might actually be the strongest contender to make the papers the next day. After all the bruising and hollering and Big Bird, Binders and Bayonets, we still have a dead heat. A stalemate, too close to call. Only an idiot would try.

And instead of Hope, with the scrambling and hysterics of voter fraud and suppression, and the bile being flung by both sides in equal measure, I would settle for Sanity.

So here is my cartoon for Election Night 2012.

An entire nation equally matched against itself, tugging frantically on the electoral votes that will keep their values and agendas alive. Fueled by rage, prejudice, optimism, paranoia and deep, deep love for their country and all it stands for, absolutely convinced that their way is the right one, that their ideology is more American than the other team's.

Partisanship is the theme for this election, two vehemently different visions for life. 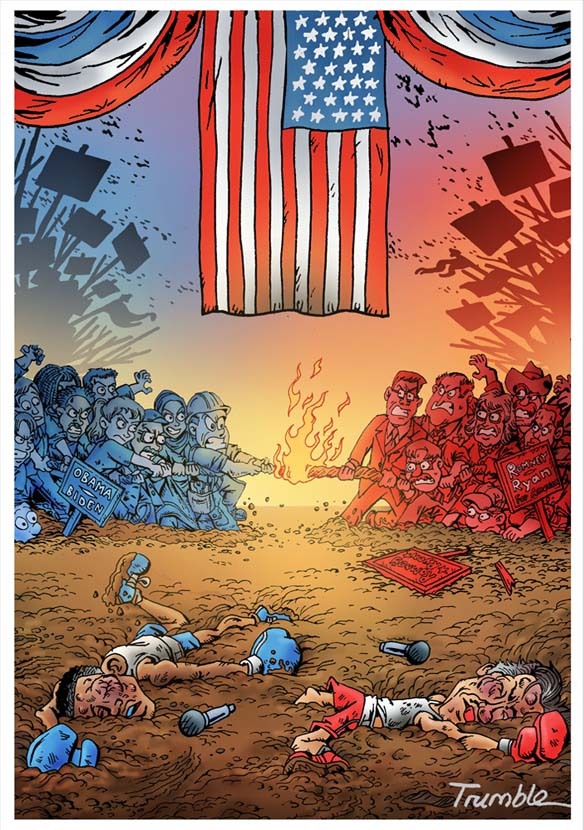 But the difference between now and then, as far as my cartoon is concerned, is that I know a little more than I did then.

My cartoons for 2008, amusing or diverting as they may be, show two candidates slugging it out. And that's what most political cartoons depict, because we work in abstractions, in simplifications... but what I know now, as opposed to then, is that the candidates themselves are not the ones who will do the heavy lifting. The voters will. The people. The candidates are the faces, the icons, the "props" as Obama himself has said, the idols that the two sides of the nation pull for.

This election was between a Democrat and a Republican, but it will be won and lost by Americans.

A battle not for America, but over the definition of the word. What America means to them.

And that is a useful idea to cling to, because when one side is victorious, the other side does not simply vanish. Whichever vision of America is chosen, all Americans still have to live in it, and live together. At least for another four years.

And so here, with all it's trivial irreverence, is my cartoon. I hope you like it, and I hope you vote.

And then, when morning breaks, I wish you all have a wonderful day.