China (AP) - Light beams, fireworks and water jets exploded from the banks of the Pearl River as China marked the opening of the 16th Asian Games in southern city Guangzhou, two years after dazzling the world with a gala opener to the Beijing Olympics. (Scroll down for photos)

Unlike the land-bound festivities at the Bird's Nest stadium that featured thousands of performers moving in coordination in 2008, Asian Games organizers paid tribute to coastal Guangdong province's seafaring heritage.

The venue on tiny Haixinsha island was configured like a sailboat for the 4 1/2-hour opening festivities designed by Chen Weiya -- famed Chinese director Zhang Yimou's deputy when he crafted the Beijing ceremony. The 27,000-capacity stadium stood as the cabin; four towering pillars in front of it unfurled eight video screens that doubled as sails.

The ceremony kicked off with a small boy floating down from the sky on a leaf-like carriage lit in green. He poured water from a bottle, setting off giant fountains that sprayed in arcs across the stage. Four dozen water goddesses seemed to walk across the water, followed by a dozen fairies rising out of pools in the stage floor.

Performers flapping large pieces of red cloth scrambled across the stage to create the image of petals dropping on water. Other actors entered in a large sampan-like vessel, recreating a journey in rough seas, with the would-be sailors swaying on ropes and ladders amid waters represented by large flags waved by hundreds of dancers.

In a playful segment, dozens of dancers attached to wires seemed to run across cityscapes flashed across the video screens, climbed mountains and formed formations to look like eagles flying through the sky.

In a nod to Chinese hurdling superstar Liu Xiang, who is recovering from an Achilles' tendon injury that forced him to withdraw from the 2008 Beijing Olympics, the dancers formed hurdles across a track while one jumped smoothly over them.

In keeping with the night's nautical theme, instead of walking into the stadium, the athletes arrived on boats that ferried them down the Pearl River. Brightly illuminated in bulbs of different colors, the 45 boats were decorated with Asian landmarks -- including Japan's Mount Fuji, Cambodia's Angkor Wat, Jordan's Petra and India's Taj Mahal. China was represented by the Temple of Heaven, the Bird's Nest and the country's pavilion from the recently concluded Shanghai World Expo.

When the final torch bearer, Olympic champion diver He Chong, approached the Guangzhou cauldron -- which emerged from the stage supported by four giant arches -- he lit a big firecracker with two children who muffled their ears. The sparks that followed set the cauldron aflame.

The huge scale of the event has posed a logistical dilemma for the Chinese organizers. Except for members of the public who won a lottery for tickets to the show, most residents of this wealthy city of 10 million watched it on TV -- even though many could have enjoyed a picturesque view of the proceedings from either side of the river.

Officials locked down areas near the stadium, ordering residents within a half-mile radius to leave their homes for the night -- apparently to eliminate the threat of sniper fire. However, they were asked to leave their lights on to help maintain a glittering skyline backdrop. 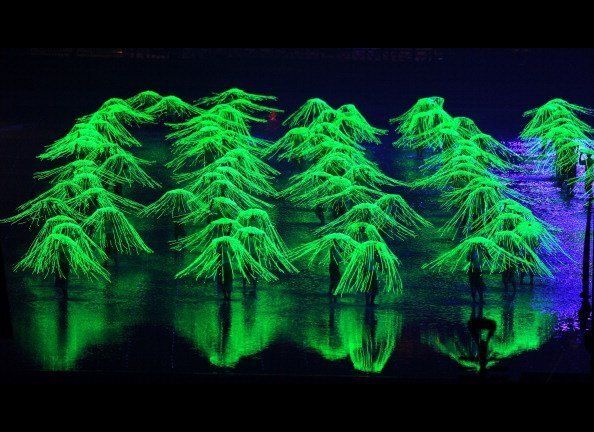 1 / 19
The Asian Games officially opened with a glitzy gala ceremony Nov. 12, culminating years of planning for a massive event that is set to reinforce China's regional sporting dominance.
Getty