Literature supplies the concept of an unreliable narrator, whose credibility one questions or otherwise doubts in the telling of a particular story. The Orange County Museum of Art's 2010 California Biennial, curated by Sarah C. Bancroft, suggests that the concept can be applied to art museums as well: the idea of an unreliable curator who tells a story of California art in 2010 seems appropriate here. 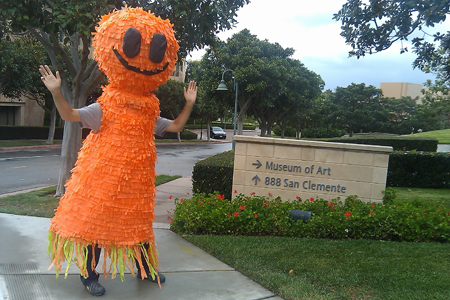 Forget the jejune nature of some of the work in the lobby and, especially, an institutional mascot-making contraption. Forget the elementary installation determined by medium, geography, and thematic groupings that you could just as easily find with a few well-chosen search terms on Google. Focus instead on the absence on any sort of unifying theme, stance, or insight the Curator might have brought to the exhibition. The Curator wrote an essay to accompany the exhibition, of which a not-useful-at-all excerpt was made available, but the catalogue won't be published until after the show, to accommodate some of the work created during the exhibition's run. Fair enough, to a point. 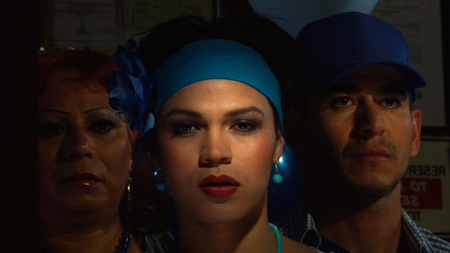 "To capture the pulse of what's happening in California," as the Curator states in a YouTube video, is more of a starting-, not an end-point of the show. Indeed, we're dying to know the pulse. Is it a death-defying 197 or a moribund 35? What about temperature, for that matter? It goes without saying that the process of creating the checklist was no little task. Indeed, the Curator made 150 visits that spanned the State, visits culled down from an "incredibly large list" that she created from personal research and recommendations from colleagues, to arrive at an exhibition of work of art by 45 emerging and mid-career artists. What exists here, though, is not what one would expect from a Curator who, having spent her ten previous years in New York and who, theoretically -hopefully - would be able to offer a fresh, outsider's perspective - as De Tocqueville did when he visited America - on the State of the Art of the art of the state. 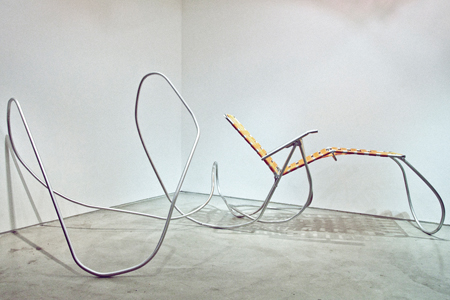 The show seemed more administered - "wrangling disparate practices into a coherent presentation" - than curated, more passive than engaging, moreso when she democratically states her hope that the show will present something for everyone. The experience is not so much that one is looking at a distillation of discrete, individual works of art convened, with an agenda, as that the work has been installed with a feel for branding, as happens in a supermarket; which then makes you wonder if the Museum has become a Costco emporium of branded artistic commodities, practical, to be sure, but prey to the flim-flam of advertising. There's a lot going on in each of the galleries but without any sort of curatorial impulse as to what they all mean, collectively if not individually, the experience resembles the museum equivalent of White Noise. 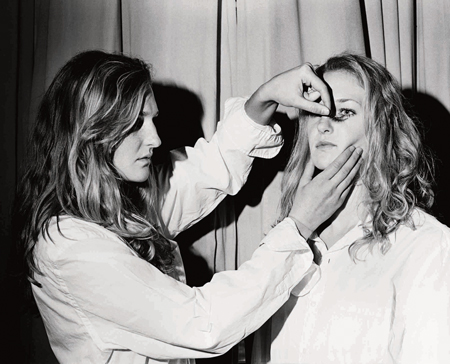 In "Bambi Versus Godzilla: On the Nature, Purpose, and Practice of the Movie Business," David Mamet makes a useful distinction between the circus and theatre. The circus, he writes, consists of events/tricks/performances strung together for the purpose of entertainment. You see one act, without thinking you gawk or marvel at the spectacle of the thing, and then you move on to the next act. There's no delayed gratification because each act is separate and complete; there are no conflicts and so there are no resolutions (Just as, in another century, Marcel Duchamp said there were no solutions because there were no problems). Individual acts are sequenced; their impact is more of a sustained buzz than of an anticipated climax. 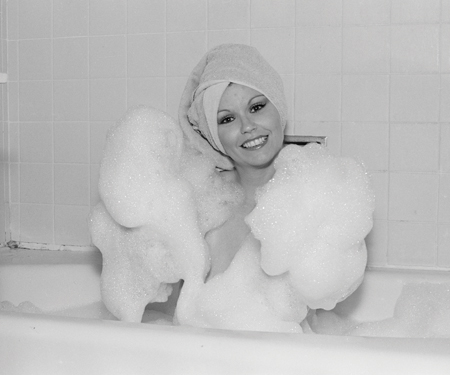 Circus acts, Mamet continues, are routined, which he defines as "optimally ordering the arbitrary," which describes this exhibition to a tee. Drama, he writes, offers "the enjoyment of the postponement of enjoyment." The experience of drama is one of fulfillment, because the conflicts the protagonist faces have been resolved; because we identify with the protagonist, his success or failure is our success or failure. The only identification we make here is with a Curator who describes her "voyage of discovery" without mentioning what she saw once she got there. If she got there. 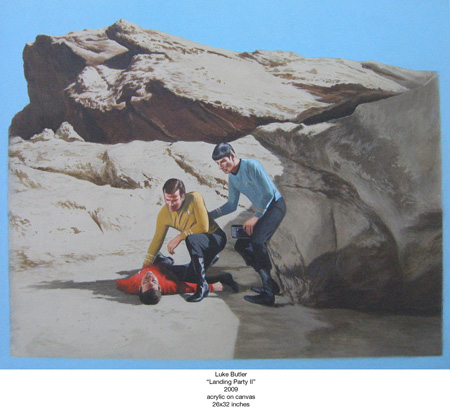 That's what this Biennial feels like, a circus. In setting and atmosphere, work and installation, the place feels festive, brimming with spectacle but not, I hasten to add, the potential for speculation. Most revealing - or, depending on your point of view, most damning - is the text-piece that you can't see upon entrance because it's over the door, and so you see it upon exit: "So, what are we going to do?" As in, "Well, that was fun, let's go bowling." It's not necessarily a bad thing, the Museum as circus, the Curator as ringleader. The Museum as venue for mindless down-time, sure, why not? The implications of such a view, however, are a little more troubling. 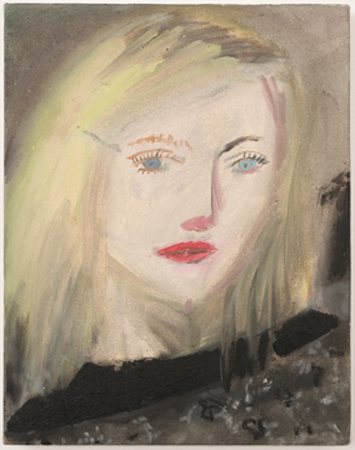 By not articulating something qualitative about California art in 2010, this Biennial issues no challenge to the viewers and so it doesn't answer one. Taken at face value, the exhibition comes across as glib. More worrisome, does it suggest the prospect of the deflation of the moral authority of art and the museums that exhibit it or does it reflect what is already the case? 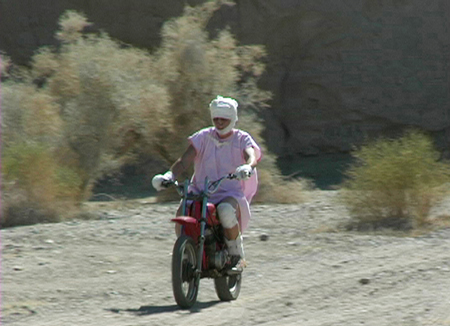