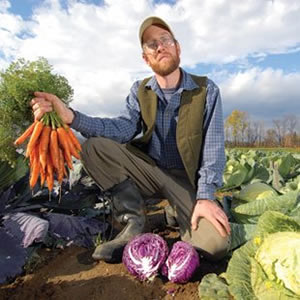 As the editorial director of EatingWell Magazine and EatingWell.com, it always amazes me to see how a trend starts in a restaurant kitchen, a nutrition journal or a TV show and wends its way out to the general public. For instance, thank Michael Pollan's diatribe against Big Corn in The Omnivore's Dilemma for the backlash against high-fructose corn syrup (trending down) or Sex and the City for the elevation of the cupcake from afterschool parties to red-carpet fare over the past few years. (What You Missed: 5 Top Food Trends of 2010)

Food may not be as trend-ridden as fashion but it's getting close. These days, hot foods, super nutrients and restaurant themes come and go faster than hemlines rise and fall. Here's my quick take on what's trending up, what's trending down and what is so, so over for 2011. (Plus, my favorite trend for 2011: #10.)

Once the darlings of the nutrition world, so-called "super fruits" have become the victims of their own hyper-marketing. Fruits like pomegranates, açaí berries and goji berries can do a lot for you. Pomegranates, in particular, are packed with antioxidants, such as vitamin C, which can help fight colds. But can these fruits (or the myriad juices, supplements and other products made from them) cure cancer or erectile dysfunction? Help you lose weight? Enable you to leap tall buildings in a single bound? Um... no. And last year, the FDA cracked down on POM Wonderful and a handful of other companies making misleading health claims.

Experts estimate that 3 million Americans (about 1 percent of the population) have celiac disease, an autoimmune condition that makes gluten--a protein found in wheat, barley and rye--damaging. But millions more Americans have become convinced they feel better if they go gluten-free, even though there is little hard science to support this. (12 More of the Biggest Food & Health Myths Busted) As EatingWell nutrition editor Brierley Wright points out, "When you go gluten-free, you tend to cut out a lot of processed foods that are often also high in calories, fat, sugar and/or salt, so you might initially feel better." The problem: there are now more and more gluten-free processed foods that are no healthier than their counterparts.

First it was hot dogs, then it was tacos, now if you see a small truck or food cart up the block, dishing out something that smells so enticing you have to cross the street, it could well be a Korean barbecue or a fancy French creperie. Three cheers for diversity in our street food!

Related: Korean Street Food Made Simple for Your Grill

Taco Truck Secrets: How to Make the Ultimate Taco

Trending: Up. And that's a very good thing.

If you don't yet know what an omega-3 is, you should. These fatty acids have been shown to have some of the broadest and strongest impacts on our health, potentially providing protection from everything from heart disease to depression. Increasingly, they are being added to products ranging from eggs to oils. However, not all omega-3s are equal: the most powerful, EPA (eicosapentaenoic acid) and DHA (docosahexaenoic acid), are found in oily fish, such as sardines and salmon. The third, ALA (alpha-linolenic acid), is found in flaxseed and walnuts.

Do You Need an Omega-3 Supplement?

They came. They took America by storm. And we adored them: Cupcakes--so cute, so perfectly portion-controlled, so easy and playful. And now that there are "cupcakeries" on nearly every corner, so over. We still love you, cupcakes. But it's time for something new and from what we are hearing from celebrity chefs around the country, it's pies, and especially fruit pies, in all their deconstructed formats (watch for crisps, grunts, slumps and betties too).

Recipes to Try: Still Love Them? 6 Amazing Cupcakes to Bake

"Meatless" is not just the new vegetarian: it's bigger than that. Meatless Monday--a campaign launched in 2003 in association with the Johns Hopkins Bloomberg School of Public Health, with the mission of getting Americans to cut their intake of saturated fat by 15 percent--has taken off. Now cities like San Francisco and public schools in Baltimore, Oakland and New Haven have adopted Meatless Monday, and celebrity chef supporters like Mario Batali are encouraging people to follow their lead. Going meatless one day a week accomplishes the goal of reducing saturated fat by 15 percent and could help reduce our risk of chronic conditions like heart disease, cancer, diabetes and stroke. (Meatless Recipes You Must Try)

Probiotics are the "good" bacteria naturally found in fermented foods, such as yogurt, kefir and sauerkraut, and, increasingly, in products with "added" probiotics, such as yogurts and juices. Why the rush to add them? Probiotics have been touted as helping everything from boosting our immune systems to aiding digestion to increasing our resistance to cancer. The jury is still out on many of these claims, though science has shown that eating probiotic-enhanced yogurts might help soothe upset stomachs among people who are on antibiotics and even colicky babies. A further caveat: there are many different strains of probiotics, so it's best to consult your doctor to see what is right for you.

Local, schmocal: If you want to be on the front lines of the food revolution you'd better become a farmer. That's right, a farmer, not a "gardener." The difference? A farmer grows food--anything from herbs to chickens. Last year, there was a 28 percent increase in gardening for food among 28- to 34-year-olds. Watch for even more young farmers in 2011.

Related: How to Start Your Own Vegetable Garden: An Easy Plan & Map

Enough already! Yes, bacon may be the most lip-smacking, tastiest treat on the planet. But it doesn't need to be candied, covered in chocolate or added to just about everything from breakfast to dessert. A little can go a long way, and at EatingWell we do use bacon judiciously to flavor dishes. But putting bacon in chocolate truffles? That's downright decadent.

Related: 5 "Bad" Foods You Should Be Eating

This is my favorite trend of the year: simpler, more "natural" food. Witness the prevalence of new products that tout what's not in them: Häagen Dazs Five ice cream (just five ingredients), FreeBird and Just Bare Chicken and the slew of other hormone- and antibiotic-free, free-range meats. At EatingWell, we've always believed that the best food is homemade, using just a few simple, healthy ingredients.

Get In On the Trend: Our newest cookbook, The Simple Art of EatingWell, is 500 pages of our best tips, techniques and recipes--many of which use fewer than 12 ingredients, cost less than $3 a serving and can be served in 45 minutes or less. That's simple.

What food trend do you think will take off in 2011?