The day a young fruit-seller, tired of corruption and sick of constant humiliation, set himself ablaze in Tunisia, he also sparked a wave of protests that would rattle countries around the world. In 2011, people on nearly every continent took to the streets to express frustration with their leaders, parties, and ruling regimes. In several cases, 2011's protests led to revolutionary changes.

In Egypt, thousands of demonstrators in Cairo's Tahrir Square defied a brutal regime crackdown and toppled longtime leader Hosni Mubarak. The ousted president is currently standing trial in Cairo for corruption and killing protesters, while Egypt is in the midst of its first free and democratic elections.

Libya saw an end to four decades of rule by eccentric Colonel Muammar Gaddafi and his family. In a spectacular game of cat-and-mouse, rebel fighters hunted down Gaddafi as they captured loyalist strongholds city-by city, ultimately killing the colonel and one of his sons near the city of Sirte.

In Yemen, protesters camped out daily in the streets of Sana'a, uncompromisingly demanding the resignation of president Ali Abdullah Saleh. Last month, the president promised to hand over power in a landmark deal. Saleh had ruled Yemen for 33 years.

However, protests in many other parts of the world rage on.

Inspired by the events in Egypt and Libya, Syrian demonstrators hit the streets in March 2011, demanding democratic reforms and political participation. Yet the regime of Bashar Assad has reacted by ordering a brutal crackdown that has left more than 5,000 people dead so far.

In 2011, pro-democracy protesters in Bahrain also were met with brutal violence. Demonstrators and medical professionals who took care of the injured were arrested and persecuted.

Below, HuffPost World presents some of the most dramatic photos of 2011's protests and uprisings. 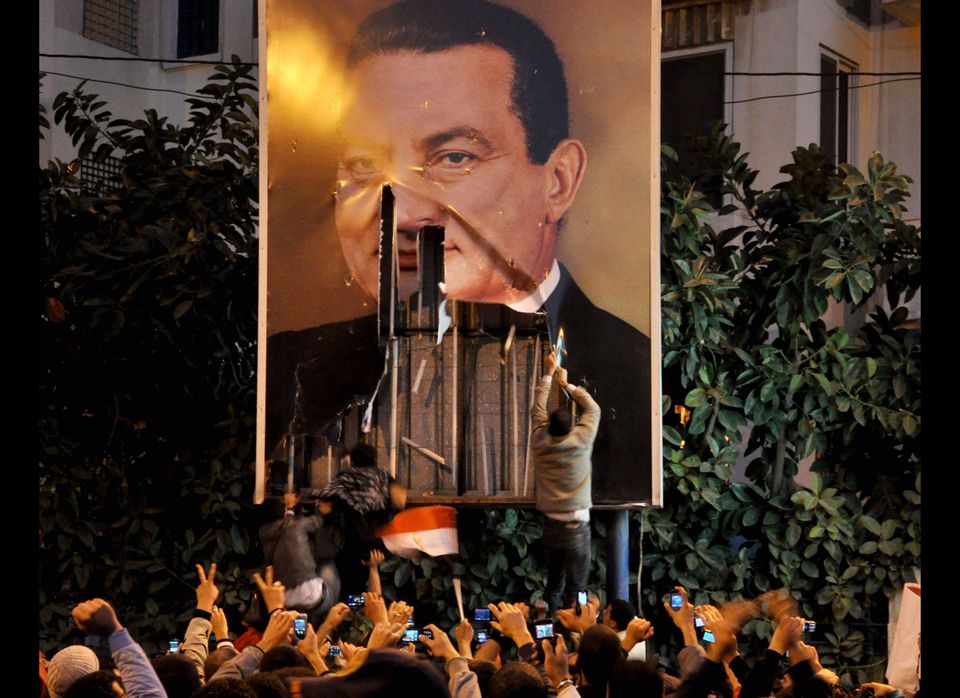 1 / 86
Egypt Uprising 2011
Demonstrators deface a poster of Egyptian President Hosni Mubarak in Alexandria, Egypt, Tuesday, Jan. 25, 2011. Thousands of protesters marched in Alexandria in what was dubbed a "Day of Rage" against Mubarak and lack of political freedoms under his rule. (AP)