In early October, I attended the 2011 Take Back the American Dream Conference in Washington, D.C. Under the umbrella of the Campaign for America's Future and the Institute for America's Future, joint sponsors included The Nation, SEIU, the AFL-CIO, MoveOn.org, and Rebuild The Dream. There was visibility for partners that transversed a continuum from Asian and Pacific Islander American Vote to the Texas Freedom Network.

Keynote and break out sessions pinpointed the agendas of securing Social Security, Medicare, jobs, and tax justice. There was a commitment to be proactive on concerns from the Ohio Referendum to voter suppression, with a vow to run American Dream candidates up and down the ballot -- from school boards to the halls of Congress.

When Robert Borosage, co-director of the Campaign for America's Future, noted to a ballroom filled with attentive listeners, "There is energy in the room," he wasn't exaggerating. The atmosphere was a cross between the unveiling of a new gadget at a tech event, and a revival meeting for those thirsting for renewal at the well of progressive waters.

There were teachers and other union members who reacted enthusiastically to missives such as, "Stand up and fight back. When the people rise up on all fronts, that's when we win." A Capraesque feeling pervaded the gathering, with a line up of speakers delivering speeches with a can-do spirit -- sharing the Jimmy Stewart role. Borosage warmed up the crowd with the observation, "The Tea Party is ersatz populism." He qualified it as a front for those who are anti-gay, anti-women, and anti-environment, bent on revoking the Great Society. "We are building a populist movement," he said. "No more accepting unemployment as the new normal."

There was audible agreement coming back at him from the audience. The message hit home for "Pam" from Ohio, who was part of the Center for Community Change delegation. She told me that she had been a warehouse manager, injured on the job, and was struggling to obtain disability. She said, "The Tea Party feels they had their rights taken from them. The people in the trenches never had them in the first place. We as Americans have gotten away from morality. It's now a dog eat dog world -- and some dogs won't give up their bones."

Rep. Donna Edwards (D-MD) followed the thread invoking Franklin D. Roosevelt's belief that the wealthiest in the country had a responsibility to the poorest. She told the audience, "We are here to organize. We can't just talk. There are those out there that would like to see Progressives have a food fight among each other -- or with the president." She took a second before delivering the punch line: "This is not a cafeteria." Edwards, who follows her own path over the party line, admitted that she hasn't always been a "happy Democratic camper." She accentuated the sentence, "We are not going to go away silently while the top 2 percent walks away with the American Dream."

Delivering the first keynote, Van Jones, co-founder and President of Rebuild the Dream, did not disappoint. Part political pundit, part performance artist, he delivered a rousing call to arms -- with dollops of humor. "We have gone from hope to heartbreak," he said. "I'm not mad at the Tea Party. I'm mad at us for being so quiet. We had the wrong idea of the presidency. It's not 'Yes, He Can.' We've been depressed and distressed. Some people say, 'I'm never going to hope again.' We went from hopey to mopey. The movement for hope and change wasn't built by Barack Obama. This is your movement!"

In response to those who lament, "This country is full of stupid people and I'm moving to Canada," Jones responded, "What makes you think they want you?" Referencing his brief tenure in 2009 as Obama's green jobs adviser, Jones said, "Y'all know that I worked at the White House for six months. Best time of my life -- followed by the worse two weeks of my life." There was hearty laughter in response. Jones continued, "I've studied the Tea Party. There is no Tea Party! You can't go to Tea Party headquarters. The Tea Party is an open source brand. They make individuals into Tea Party affiliates and they branded a network -- building a network tied to principle and passions."

Before Jones welcomed to the stage the group of people that would be serving as the leadership of the American Dream Movement, he implored, "Don't stop being inspirational. We've been in tougher times. The only question is are we going to fight together or fight alone?" He stepped back from his vanguard position to join ranks with the individuals he had just introduced.

The afternoon featured Robert Reich, in an address that highlighted a strongly personal note. He covered many of the talking points I had seen him deliver on cable shows: An examination of the struggle between the "regressive" and "progressive" camps in the United States, disputing the argument that "if we shrink government we can create jobs," and refuting that Social Security is a Ponzi Scheme. He got in some zingers like, "The Supreme Court says corporations deserve First Amendment rights. I'll believe it when Texas and Alabama start executing corporations." Yet the strongest element of his talk was when he interwove the national narrative -- featuring the strong versus the weak -- with his own story of being bullied as a result of his diminutive height. He shared how he had built alliances to protect himself from getting physically assaulted and beaten up. One of his foremost protectors was Michael Schwerner -- the civil rights worker killed in Mississippi by the Ku Klux Klan. Reich maintained, "Americans will stand up to the nabobs of negativism. They will say, 'No more bullies.'"

In the large-scale presentations, as well as the side room panel discussions, there were plenty of takeaways. Celinda Lake, top pollster, spoke about messaging. She said, "The American Dream, explained correctly, can mobilize people. Folks need a reason to vote." Lake stressed the importance of reaching out to the total spectrum -- from blue-collar workers to those in the college educated ranks. Katrina vanden Heuvel, Editor of The Nation, challenged Main Stream Media to provide accurate reporting with the query, "What is the legitimacy of your claim?" Rep. Barney Frank (D-MA) drilled down on the importance of working towards military reduction. He wryly observed, "You don't defeat terrorists with nuclear submarines." Gloria Totten, the President of The Progressive Majority insisted, "You can't keep electing the same old kind of Democrats! It's time to move the ball forward." She parsed the math that supported the need to elect 25 Progressive Democrats to take back the House of Representatives.

State Senator Nina Turner of Ohio got to throw out some red-meat rhetoric via the feisty delivery of her message. After inviting attendees to visit her home turf, she said, "It's time to elect folks who put service over seats...and they should vote against any bill that takes away workers rights. We are fighting for our collective lives! This is a moral imperative." She got the crowd roaring when she invoked her Grandmother's advice, "You need the wrist bone, the jawbone, and the backbone!"

Members of the press were invited to hear six movement leaders speak in a closed-door session. Each person gave a brief statement before questions were taken. Borosage said, "Any president who runs in an economy like this, runs into pretty strong headwind." He indicated, "Last year people were focused on the disappointment with Obama. This year, people aren't waiting. We're going to build a demand. The question for us isn't is this movement yoked to Obama, but can we build our own independent movement?"

Executive Director of MoveOn.org, Justin Ruben, said, "We are at a turning point right now." Referring to the movement that began with a "spark in Wisconsin," he discussed the Occupy Wall Street action -- tagging the pushback, "The biggest untold story in American politics." Naming the national demonstrations the "American Autumn," he said flatly that it was "the end of 30 years of 1 percent running the show." He asserted, "We will not accept yet another budget agreement that will bring more misery to folks already suffering.

Deepak Bhargava, Executive Director for the Center for Community Change, agreed that, "Attacks on the social contract have created a fire storm." Arlene Holt Baker, from the AFL-CIO, stated that American wanted to work, and promised a commitment to hold all politicians accountable -- regardless of party affiliation. She emphasized, "We will be educating our members to understand who's really on their side, and it's going to be clear." The floating question for Obama was, "Are you going to tap into this movement? Will you lead and get in front?"

The opening remark delivered by Van Jones was, "I don't see too many TV cameras." Those present were primarily print or online reporters who were already well attuned to the insights being promulgated. Jones was straightforward in his claim, "This is a big deal. Folks across this country are dismayed and shocked by two years of nonsense here in D.C. They took a wrecking ball and painted it red, white, and blue." Stressing the fact that people had reached their pain threshold, Jones said, "People are standing up now. You will see the sleeping giant beginning to awake. The Tea Party is a small percentage, yet they took the whole country off track." Reiterating, "This is a big deal," Jones gave stats. "We're going to reach out to one million leaders. 600,000 people have already signed up. We have sitting people in Congress and we are running 2,012 candidates for 2012. We're tired of this. This country is better than this. We watched the process of hope to heartbreak." Then, with a brief pause for emphasis and timing, he added, "Save your notes. This is the first draft of history."

One reporter, who identified herself as a long time activist, had an inquiry that explicitly expressed reservations about the potential for long-term success. Jones responded with humor, which in turn had a riling effect. Switching gears, he acknowledged her doubts, restating his vision and goals.

Doubtless, there will be plenty of skeptics and naysayers. However, The Campaign for America's Future and its partners have pledged to reach out to disaffected citizens looking to have their voices heard. The euphoria of the gathering may be over, but the work is in full swing. Co-director Roger Hickey just sent out an e-mail with the subject line, "Don't let Dems Cut Medicare, Social security for the 99%." The online petition asks Senate Majority Leader Harry Reid and Nancy Pelosi: Don't let the Super Committee cut Social Security and Medicare.

At least someone is asking. 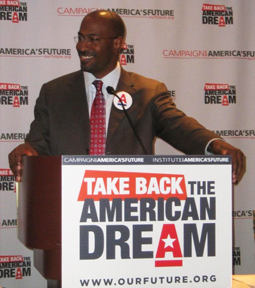